Home | Hellraiser Gets a Re-Launch- Great News From Boom Studios!!

Hellraiser Gets a Re-Launch- Great News From Boom Studios!! 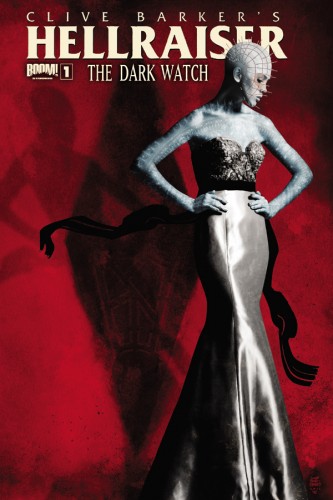 We are happy to hear that one of Boom Studios most successful series, “Hellraiser” will be getting a re-lauch in the form of the new Hellraiser series “DarkWatch“. This is great news for horror fans…and if you havent had the chance you should also grab the previous incarnation (of which we reviewed quite a few here)

November 29, 2012 – Los Angeles, CA – This February, BOOM! Studios will relaunch the HELLRAISER franchise with HELLRAISER: THE DARK WATCH, an all-new ongoing monthly series. The relaunch of this incredibly popular series will be co-written by creator Clive Barker and Brandon Seifert (WITCH DOCTOR, HELLRAISER: THE ROAD BELOW) and illustrated by newcomer Tom Garcia (HELLRAISER).

NEW ONGOING SERIES! THE NEW ERA OF HELLRAISER BEGINS! As promised, Clive Barker did not only return to the Hellraiser universe, he re-imagined it! Nothing is as simple as it seems – the old ways have been destroyed and a dangerous new world lies in its wake. Where are Elliott Spencer and Kirsty Cotton? Who will rule and who will serve? Rising star Brandon Seifert joins forces with the legendary Clive Barker, with art by Tom Garcia, to begin this amazing new chapter in the history of one of horror’s greatest franchises.

“I grew up with Hellraiser and Clive’s novels — so it’s a huge, surreal honor to be collaborating with him on The Dark Watch! Under Clive’s direction, the Hellraiser ongoing series has gone in some radically different directions over the last two years. I’m really excited for what’s next — and even more excited that I get to be involved!,” said Brandon Seifert.

HELLRAISER: THE DARK WATCH #1 ships in February with main covers by Tim Bradstreet (28 DAYS LATER, STAR TREK) and Nick Percival (HELLRAISER, 2000 AD) as well as incentive covers by Frazer Irving (HIGHER EARTH, BATMAN INCORPORATED) and Bradstreet. The first issue is a 32 page, full color issue that retails for $3.99 and is available for order under Diamond Code DEC120913.