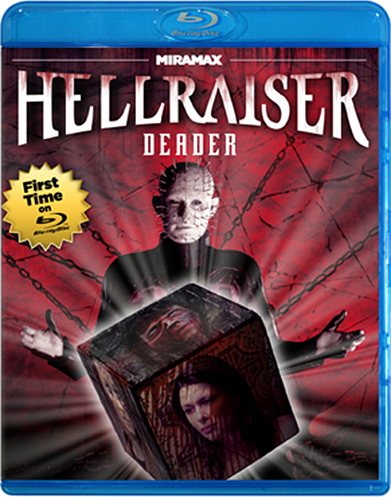 In London, after investigating crack addicted junkies for an article in her newspaper, the journalist Amy Klein watches a bizarre videotape. Her editor Charles Richmond received the footage of an underground group of youngsters in Bucharest apparently becoming zombies through the power of their leader Winter from a member, Marla, and invites Amy to prepare the story. Amy accepts the challenge, and once in Romania, she finds Marla dead with a puzzle cube in her hands. She brings the object to her hotel room, and opens it, beginning her journey to hell

If you are a general consumer, you might have gotten to the point of being lost with the Hellraiser franchise. If you were a Ceno-head (yep I just made that term up), then you recognize this as the 7th inclusion into the sometimes “off track”, “off beat” series of Hellraiser films. I believe many of us faithfully kept with the programs hoping for a good one to appear between the not so inspiring ones. Hellraiser: Deader (2005) like many of the other releases keeps to the formula of not showing much cenobite action and making up new stories as it perverses along.

In this entry hottie Kari Wuhrer plays the role of noted reporter Amy Klein. Her stories are received quite well, though her attitude seems to get her in trouble or fired from gigs. Her current gig is working for the “London Underground” newspaper and while she “gets” the story, she is also known to not exactly be much of a team player. As we begin, her editor Charles Richmond calls her in for a viewing of a mystery tape he just received from a girl named Marla. The tape is a window into a young Bucharest-centered group who call themselves “Deaders”. As they watch, this group proceeds to observe a young girl execute herself only to be brought back from the dead per their leader Winter (Paul Rhys). Amy intrigued with the potential story takes the gig and heads straight off to Romania where she first encounters the “puzzle box” from the grip of a dead girl. 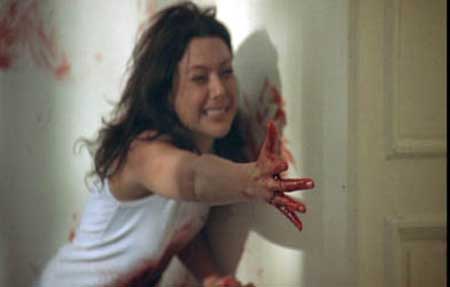 Now hopefully enough of you Hellraiser fans have seen enough of these films to know that once you tamper, open or indulge the box…well all bets are off. Amy can’t resist playing with this good old gold rimmed device and gets a face full of chain ripping. However, when Pinhead arrives we realize that she’s only been dreaming…or has she?

Amy determined to “get the story” goes on her quest with only the dead girls video lead to send her in the right direction. This first includes a train ride on the debauchery box car (the last freight train compartment) filled with plenty of weird racy denizens intent on excess. (A nice use of racy nudity here…to boot). Then upon seeing “Winter” she almost loses her mind when he jumps into the next on-coming train. 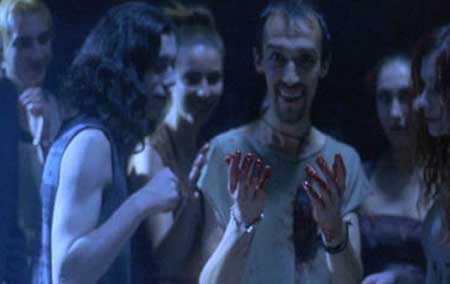 Amy soon finds the area she’s been looking for with Winter heavy on her mind. Flipping stright into a nghtmare she fins herself witin the group, laying on the table and abotu to get stabbed.

Hellraiser seem to delight in the ol trend that Freddy Krueger films place upon its victims. The bait and switch technique of …being awake..or not being awake…maybe it’s all a hallucination (you know the rest). There is a point in this film (when she gets stabbed) that the film loses it direction. This scene begins the reveal about Amy’s awake but not awake, dead but not dead transitions which could have been clearer. We are told that the way home is thru Pinhead, but then there is the pressure of her having to kill herself. I’m not sure if its just me, but didn’t this whole 3rd act feel fragmented and disorganized? What? Winter is a Lemarchand?, What….. Marla has come back from the dead? What…..the Deaders are interfering with Pinhead’s plans???….Did you get all this ? I’ve watched it twice now and still am feeling lost. 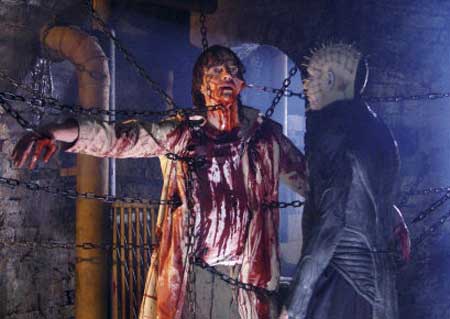 There is a pretty adequate scene of chains flying and ripping thru flesh, but on a whole, the plot is seriously misguided suggesting that the writers didn’t really know how to end it properly. 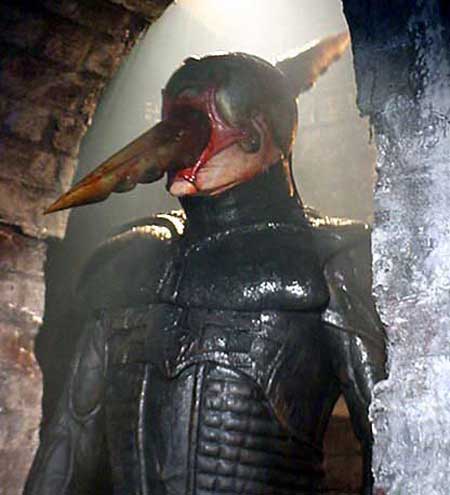 As a HR entry I did enjoy seeing actress Kari Wuhrer (she had some pretty intense acting scenes) but Hellraiser: Deader ended up being one of the worse in the series. Fans will still be curious enough to watch it, but dissatisfied with its weak outcome.

Hellraiser: Deader (2005) is now available on Bluray with Extras! per Echo Bridge Entertainment