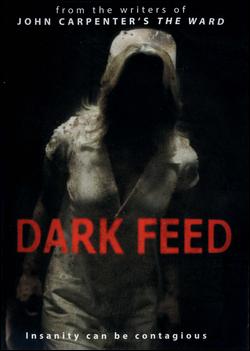 A crew moves into an abandoned psychiatric hospital with a shadowy past to shoot a film, when the leaky wet building comes back to life and feeds off its new inhabitants.

I was so terrified I would be subjected to yet another found footage film. For as much as I throw my darts at this fad genre, Karma should certainly prove herself known and punish me at some point in the game. From the title, that is precisely what I’d assumed of “Dark Feed,” set in an abandoned mental institution as a film crew shoots an obviously incompetent horror (Thriller? Mystery? P**no? We’re never made certain) flick over the course of a night. Like wearing blue jeans on a blind date, the found footage trend is lazy fashion. Not without its attributes, but lazy fashion nonetheless.

If anything, the tone and style of “Dark Feed” owe a great deal more to the Brad Anderson near-home run of 2001, “Session 9.” Whereas Anderson’s escalating tension brought on by a cursed building was palpable, “Dark Feed” burns far too much time following its characters as they basically meander about. Odd sounds in the night and perplexed intellectuals didn’t do it for me when I first viewed “The Haunting” on a Saturday afternoon as a child. However, unlike the silly culmination that “Session 9” sadly resulted in, “Dark Feed” piles on the crazy and nearly pulls it off.

Screenwriter Chris (Andy Rudick) serves as our central character, and though amiable enough, he spends an enormous chunk of the duration being the voice of reason amidst this den of increasingly violent and disturbed peers. Half of the film, he isn’t even aware anything is amiss, so we are left with interspersed “aw, shucks” wisdom pertaining to absolutely nothing going on around him. Something is wrong with the water in the institution (go figure, it’s disgusting and jet black and the soundtrack swells whenever it appears), and its creeping presence is causing cast and crew to become more bizarre in their actions as the night continues. Of course, the hospital has a dark and disturbing history (numerous patient deaths and disappearances, unscrupulous doctor performing barbaric “experimental” procedures, the usual), and anyone who comes in contact with the water witnesses ghostly apparitions. Where this is going is anybody’s guess. That, I liked. 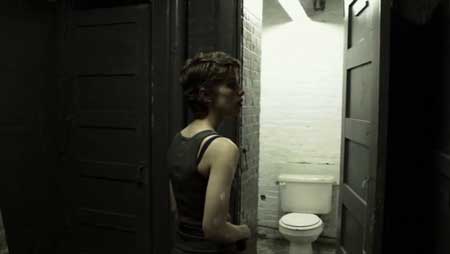 “Dark Feed” follows that basic vibe throughout most of its duration, until writer/directors Michael and Shawn Rasmussen decide it’s fine time to get the show on the road. This important transition could have taken place whilst the spoiled lead actress Rachel (Rebecca Whitehurst), stuck on an elevator awaiting a scene, has an eerie presence appear behind her. As she exits shrieking and refusing to get back on, any normal individual would deem the incident noteworthy. However, this occurs without so much as a concerned acknowledgement from anyone else. Teamed with sardonic techie Marissa (Dayna Cousins), Chris never reaches any revelations about what exactly the hell is going on. He and Marissa merely chat about themselves as awful things happen unbeknownst to them until the time arrives to start running. It’s a bit maddening.

Once pompous lead actor Jack (Michael Reed) shaves his head in a demented fervor and prop master Bruce (Curt Klump) is found beating his own skull against a concrete wall, “Dark Feed” not only finally kicks in with some semblance of a payoff, but it gets delightfully wonky as well. Once the evil of the building has enveloped him, Jack’s actions seem almost as if they were randomly drawn out of a “Crazy Torturin’ Bastard” hat. The same sentiment goes for the nastier deaths later on in the movie, which carried the (belated) quality of being completely out of left field. Man, I am going berserk with the sports references here. My apologies, friends. Detroit Tigers’ opening day is right around the corner.

There almost seems to be too many characters in the movie, perhaps part of the reason why the script feels the urge to linger upon them. Though all can be categorized as engaging enough, too much of the brunt of the film is placed on their shoulders. The Rasmussens, who wrote the failed John Carpenter attempt at new found relevance “The Ward,” know how to fashion an intriguing storyline around a creepy setting, but falter in the execution. Much of “Dark Feed” is very effective, but it flounders and nearly drowns as it treads water. Seriously, how many times can we watch an innocent follow a peculiar noise to a poorly lit hall, calling out hopefully as though they possess not one molecule of foresight or intuition? It didn’t have to be this way. 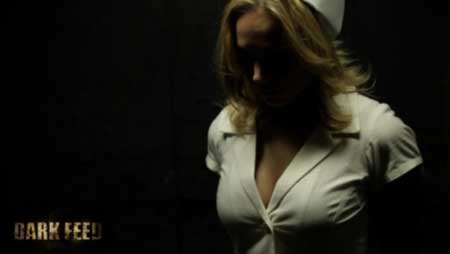 The hospital itself is a dismal marvel. The corridors and cavernous, empty (Or are they?) rooms lying just beyond reach of the safe communal areas add a level of insistent foreboding that keeps the attention with a mere turn through a doorway. Unfortunately, many of these instances amount to nothing more than distractions from those actually affected by the malevolent surroundings. Whenever the film’s focus concentrates on Chris and Marissa discussing their favorite summer vacations as children or whatever the flying fig they jabber about in these passages (I’m pretty sure I made that summer vacation thing up), we soon grow to realize that we have at least four minutes before something groovy makes an appearance. There is nothing worse than being predictable, and this is exceptionally true for horror pieces. 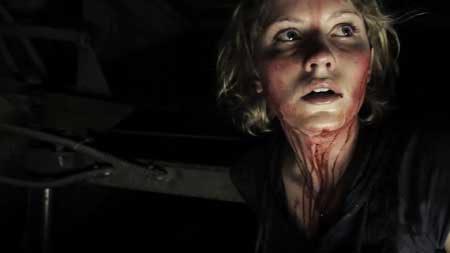 This is another case, like “American Maniacs” two reviews ago, in which an entire machine relies upon mere cogs to get the job done. The Rasmussens have created an atmospheric and well-crafted thriller within “Dark Feed,” unfortunately that atmospheric and well-crafted thriller doesn’t happen to be anywhere apparent in the final fruits of their efforts. Further refinement, and they may have a great horror flick in them yet. Or, only just “Dark Feed 2.” Meh, I’ll still watch it. 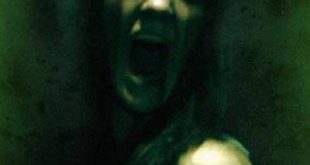 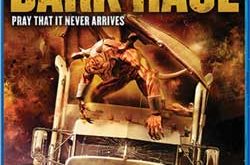 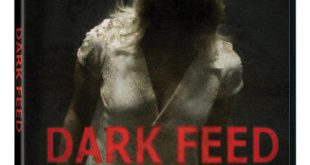 Artwork And Trailer For DARK FEED