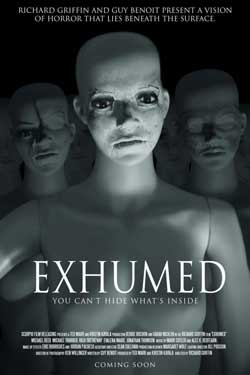 A warped and mysterious family are unable to leave the house they reside in for unknown reasons. When this strange brood decide to turn their captivity into a sick and violent game, it challenges their very reality and puts all of their lives in great jeopardy.

Right from the opening credit sequence, you can tell that Exhumed, a little indie movie, is something special. From the beginning, the movie starts in black and white, the camera slowly showing a doll house and then shifting to different rooms in the house, where police exhibit numbers surround empty bottles and broken tools. So in the opening minutes they already show you how the movie is going to end, without spoiling the surprise of who is left. As you wait for the movie to transition from black and white to color, you are surprised to see that it doesn’t, there are a few scenes where the character of Laura (Sarah Nicklin) has day dreams and flashbacks in color. This was a bold move for this film, since some people see black and white and automatically discredit it as old and out dated, not giving it a chance. I can tell you that Exhumed made it work, and after watching it, trying to picture this movie in color would have taken away from the mood and charm of it.

The story opens when a teenager, Laura, dressed in black wearing large sunglasses and carrying an umbrella, staples a sympathy card onto a telephone pole. She turns back and walks to the car were the drive gets out and opens the door for her; there we meet an older woman who seems to not approve of what Laura is doing. Right from the beginning you get a feel that she is a very negative person who likes to complain about everything. Only in the end credits do they finally give this character a name, the Governess (Debbie Rochon). 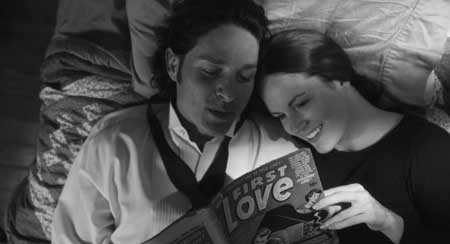 The trio walk into a normal enough looking house, where the first thing we see is the governess yelling at the driver, also another character that isn’t named in the movie but is credited as the Butler (Michael Thurber), for smoking in the house, even though she does it later in the movie herself. This is when they introduce you to the other two people living in the house, the trampy Rocki (Evalena Marie) and the boorish Lance (Rich Tretheway). Lance starts off by telling the Governess some bad news about his brother, Steve, who will be going to jail instead of moving into the house. This seems to bring up a conundrum for both her and the Butler, both who think they need a sixth person living in the house. They discuss it over dinner, where we catch the first sign that something is a little off with this group, when the way the Butler answers the door to get their takeout food. Also in this scene we see the Governess argues with the Butler about how much he paid for the takeout food they are eating, making it seem like it’s her house and that she’s in charge of the group, this leads to some interesting battles between her and the Butler later in the movie.

Now we meet the person that leads to all the problems in the movie, Chris (Michael Reed), a young college student who is looking for a place to stay after an altercation with his roommate, which left him with a black eye. He notices the flyer for the boarding house and checks it out. Once there he is shown around by the Butler, when Laura takes a liking to him, but this doesn’t sit well with the Governess, and she inquires about his black eye. Chris lies and tells them he fell down the steps; the governess accuses him of being a drunk and demanding that he not move in to their “dry” house. The Butler offers the place to him anyway, despite what the Governess says. Now the house has grown from 5 to 6, and it’s time to watch them fall one by one. Also by this time you start to realize that each person has an individual personality and they all differ from each other, one being a whore, or a slob, or even being mentally childlike. When you start to really feel these characters out, you follow the Butler into a locked room in the basement and get to see his little private hobby, which shows you how he sees the rest of the people.

The Governess senses what Laura and Chris are trying to do with each other, and tries to put a stop to it by any means necessary. This leads to Chris untimely death, and starts the domino reaction that leads to the climatic end scene. After Chris’s death, you notice more and more how strange these people are, and what they have to turn a blind eye from.

The big blank that you try to figure out in this movie, is how all these people came to live under one roof together. Are they all family? Are they a coven of witches and warlocks? Are they the last clan of vampires just trying to make it in the modern day world? The answer is far more simple then any of that, and it makes the movie work, no bizarre plot twist here. Writer Guy Benoit and director Richard Griffin took the time to develop all the characters into their own people, not trying to make them all one in the same, this makes the story more fun as you start to become attached to certain characters and want others to meet their end sooner. That doesn’t mean that this movie is perfect, while the movie is setting up the character and their quirky traits, the movie can get a little on the slow side, maybe turning off some of the more casual horror fans, but if you can stick with it until the end, it does pay off. Another thing is you have to really pay attention to what the characters are saying to try and put all the pieces together; this might be one of those movies that you have to watch twice to make sure you catch everything. This movie took me on a mind trip and I loved every minute of it, so even through it’s just an indie, and in black and white, give it a chance it might end up surprising you.