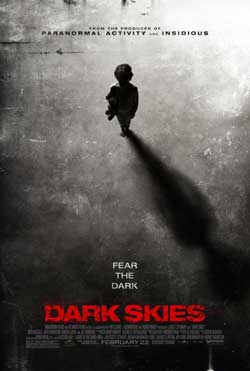 As the Barret family’s peaceful suburban life is rocked by an escalating series of disturbing events, they come to learn that a terrifying and deadly force is after them.

When “Dark Skies” arrived on the market, I’ll confess that I didn’t run out and see it. Apparently in this “later” review, neither did any of my writers. Though, I finally had a chance to sit down with it last night and am sorry I waited. From the trailers and obvious spoiler title, we GET that it’s a film about aliens. We get that they are probably not “Close Encounters of the 3rd Kind” and that “ET” is no where to be found. “Dark Skies” is toted as a horror film which despite “that fact” is a little late in the game with so many prior releases. We did the “Signs” thing, “the 4th Kind” thing and far too many “Aliens vs….” thing that the subject matter has gone a little cold.

“Dark Skies” plays things a bit different. In fact the horror is centered on the real controversy of abduction. Abduction or associated abduction can be a scary thing that HAS affected real lives with real consequences. Whether we think that it is the government drugging us and doing surgery or “Grays” that just want to study us…..it tends to freak folks out. The term “Grays” is used in is film to keep things in perspective with the majority of abduction cases. It’s not that they look like they could use a few sandwiches but that they are advanced and intent on their agenda that is scary.

“Dark Skies” centers on a typical working class suburban family. They share all the pains that you and I share. The hunt for work, the impending mortgage payments, the family model, barbeques, the school kids, and the upbringing of changing growing children. I don’t think that director Scott Stewart designed it that way “just because”. I believe he had to set this model in place for viewers to relate to the Barrett’s on a more personal level. Even that lost look in Daniel Barrett’s eyes as he faces his post layoff job searching is a move towards connection to the viewers. 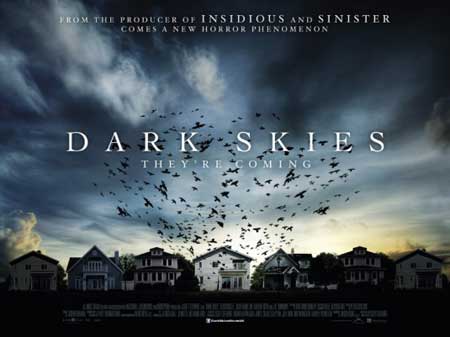 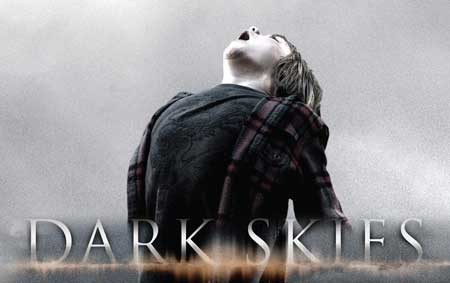 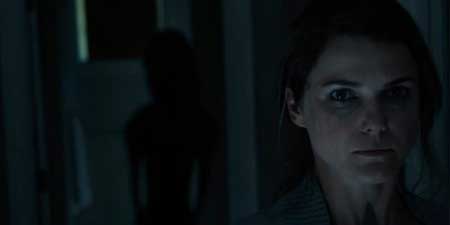 To lay out the foundation, we have actor Josh Hamilton playing the father Daniel Barrett with the stunning angelic-looking Keri Russell playing the role of his wife Lacy. The children round up with Dakota Goyo as Jesse and Kadan Rockett as Sam.

The Barretts begin to face a problem, one that they have no clue in how to deal with. With the humble beginnings of a potential intruder/ Poltergeist-style model break-in set up (yep symmetrically stacked food items) to the inevitable draw-in of something far more intent and sophisticated. The Barrett’s begin to realize that they are being subjected to a classic alien circumstance that threatens the safety, the sanity, and the union of this family. Weird things begin to occur…..manic birds, nosebleeds, intruder signs and black outs that make things a bit hard to deal with for ANY suburban-minded group. While the neighbors grow distant it is soon clear that this family union are on their own in dealing with whatever it is that is that is progressing forward. The build up, the confrontation and the emotional investment is a nail biter for sure. The horror model for the film never needs to go too far off or too sensationalistic to work for its purpose. I love the simplicity here….an approach we tend to forget. 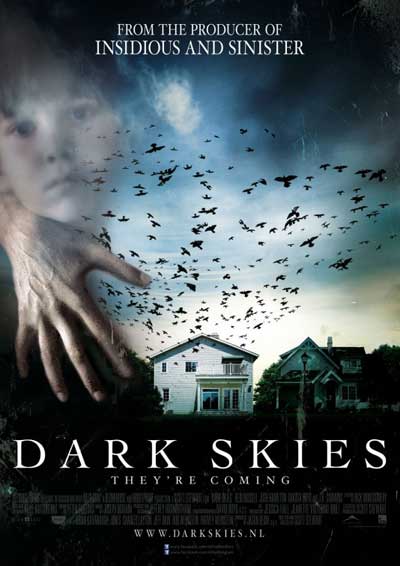 “Dark Skies” knocks on our emotional “what if” region taking on not just horror but the realization of real life horror and how helpless we may be. There is a great scene in this movie where they get educated on abductions that really cements the idea into place. It is this information, as cut “right to the chase” as it is, that says what this film needs to say. While I’m sure that “Dark Skies” may not appeal to every horror fan’s viewing needs it does work extremely well for the subject matter it has taken on. “Dark skies” delivers an ominous injection of real horror intent in getting under your skin. Perhaps alien material is not so overused as we thought with fresh perspectives still being written. I highly recommend it and suggest you follow up with educating yourself on the real life events as a follow up.

Check out this great film on Bluray per Anchor Bay 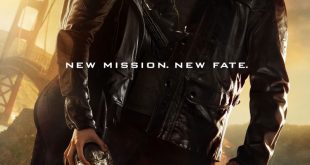 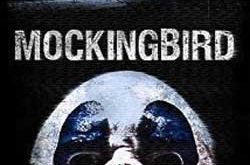 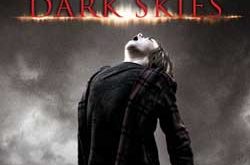