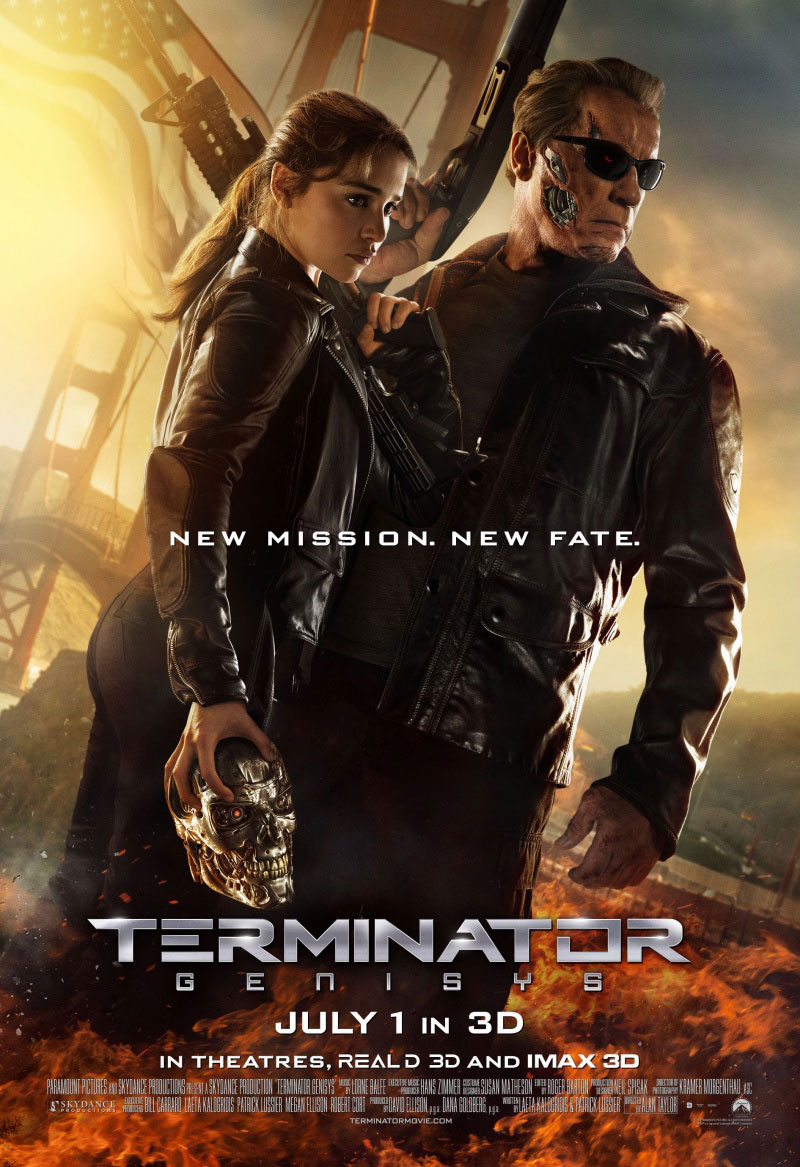 Synopsis: When John Connor, leader of the human resistance, sends Sgt. Kyle Reese back to 1984 to protect Sarah Connor and safeguard the future, an unexpected turn of events creates a fractured timeline. Now, Sgt. Reese finds himself in a new and unfamiliar version of the past, where he is faced with unlikely allies (one of which happens to be a Terminator AKA The Guardian), dangerous new enemies, and an unexpected new mission: To reset the future…

Way back in 1984, Director James Cameron’s The Terminator was released to an unsuspecting public. A brilliantly conceived & executed story, it set the stage for three sequels: Terminator 2: Judgement Day (1991), which was bigger & better than its already legendary prequel, Terminator 3: Rise Of The Machines (2003), a less successful (but still pretty decent) entry & Terminator: Salvation (2009), a failed attempt to take the franchise into a new direction. Now, six years after the last attempt to make the franchise relevant again comes Terminator: Genisys, which looks to reboot the franchise by amping up the visuals while completely befuddling anyone who might not be familiar with the previous films, and seriously confusing nearly everybody that knows all there is to know about them. 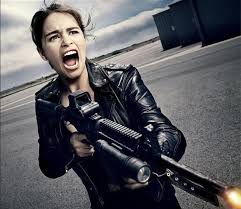 Opening in the year 2029, the script (by Laeta Kalogridis & Patrick Lussier) has resistance leader John Connor (Jason Clarke) and his army making a final push to destroy the time machine that SKYNET uses to send terminators back into the past. But he arrives too late, and just misses a terminator’s departure to murder his mother, Sarah Connor (Emelia Clarke). Recognizing the dire situation at hand, Kyle Reese (Jai Courtney), volunteers to go back in time after the terminator, and gets the go ahead from John. But John never tells Kyle that he ends up falling in love with Sarah, and is in fact John’s dad. Kyle is given a brief run down of what to expect though, and understands that Sarah won’t believe a word of what he says at first – all he knows for sure is that he must stop the Terminator from killing her. But when Kyle ends up back in the year 1984, and runs into a bit of trouble (A clever reenactment of the first film’s opening scene), who comes to his rescue? His mom, Sarah Connor, that’s who – and she knows who he is and why he’s there. She also has a very able guardian who has been caring for her since she was nine years old, namely the very same Terminator (Arnold Schwarzenegger) that Reese believes was sent to murder her (she calls him “Pops”). And much to Reese’s amazement, the three of them are being pursued by the T-1000 (Byung Hun-Lee), who was the main antagonist from T2. And if you’ve seen the trailer for this film (& who among us hasn’t at this point?), then you already know what the really big (& ridiculous) twist is. 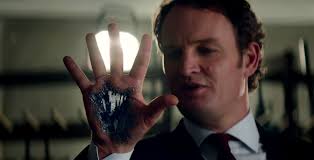 What the hell is going on here?

There’s no way for me to fully summarize the twists and turns in Terminator: Genisys, mainly because I was literally lost after about 30 minutes. I mean, it’s one thing to want to take the franchise someplace different, maybe give it a bit of a twist to change things up a little, I can understand that. But damn…this script is absolutely bananas! It just keeps piling on character reboot after reboot until the entire essence of what made the original film so great is diluted to the point of no return. While it does make an attempt to comment on the inherent danger of being completely connected in the digital world, it doesn’t really care too much about making that attempt little more than an excuse to show off some really crazy (& impressive) special effects. But as slick as the effects are, I found myself pondering over how many of the twists didn’t make much sense, and wondering how long it would be before the twists began to contradict themselves. 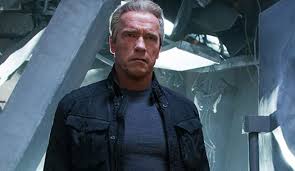 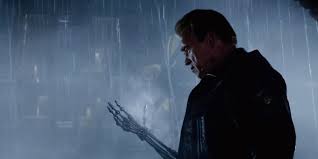 The performances range from good to downright awful. When the film goes back to 1984, the sniping & eye rolling from Emelia Clarke & Jai Courtney felt as if they were auditioning for a really bad network sitcom, all that was missing was the canned laughter. Courtney in particular seems to be half asleep through most of the film, as if someone just woke him up before the cameras were set to roll. Clarke eventually finds the right blend of plucky heroine & wide eyed waif to make her interpretation of Sarah Connor nearly comparable to Linda Hamilton’s portrayal of the character in the original film. Jason Clarke (no relation to Emelia), starts out striking the right notes, but he eventually becomes robotic & staid. Now, given the nature of his role, this might’ve been on purpose, but somehow I don’t think so. Amazingly, the best performance in the film comes from Schwarzenegger as The Terminator, but seeing as the character is essentially devoid of emotion – that ain’t saying too much. And there are sections of dialogue that feature a lot of technical babble that sound like plain babble when Schwarzenegger attempts to enunciate them. But he does lend the character a sense of humanity, and while it shouldn’t be there, it does make the character more interesting for the most part.

The idea of a new Terminator film after the failure of Terminator: Salvation, might have sounded good when first conceived, but the final product is little more than a special effects showcase hoping to blind its audience to the ridiculously convoluted script. And I’m not kidding, this script is absolutely bonkers! I have no idea what the producers were thinking when it was given the green light to go into production, and it features so many twists that I wonder what the hell they have planned for the next entry in the franchise (This film is the first in a proposed trilogy that essentially eliminates both T3 and Terminator: Salvation). Maybe I’m crazy, maybe I’m nuts, maybe I’m overthinking the whole thing, but I don’t know how they can write themselves out of the corner they’ve written themselves into (although there is a ridiculous stinger in the middle of the end credits that give us a hint). Why is it ridiculous? Watch the film and see for yourself.

In the end, Terminator: Genisys does so much to shoot itself (& the entire franchise) in the foot, that I can’t recommend it. It’s just too ridiculously dense, and it goes out of its way to make itself as needlessly confusing as possible. You can spend $500 million on the greatest special effects money can buy, but it means absolutely nothing if there isn’t a cohesive, coherent story to hang them on. In that respect, Terminator: Genisys fails completely. But, for what it’s worth, it does indeed look really shiny! If that’s what you need to be entertained, then this is the film for you.

I’d be willing to forego some of the shininess for some decent storytelling though.