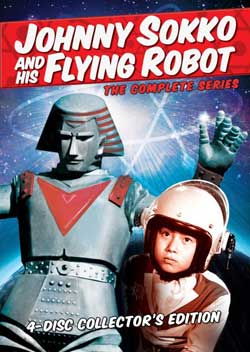 A young boy aids in the fight against a mechanized terrorist organization as the sole controller of a prototype giant robot.

At long last, the cult classic TV show “Johnny Sokko And His Flying Robot.” has been resurrected for all to see. First created in 1967 running a span of 26 episodes, the series was often played in after school time blocks to children and teens who were “yet” to learn about cable and having more than 5 channels to choose from. This series was one that I remember quite well while trying to re-adjust my TV antenna to get good reception. The show was usually swapped out alternating between Johnny Sokko episodes and “Ultra Man” at the time. For young viewers, the 2 shows were molded from the same influence and technology making them sometimes indistinguishable. 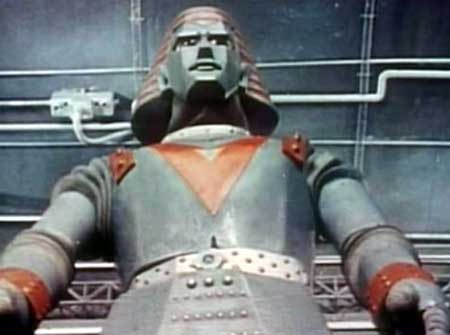 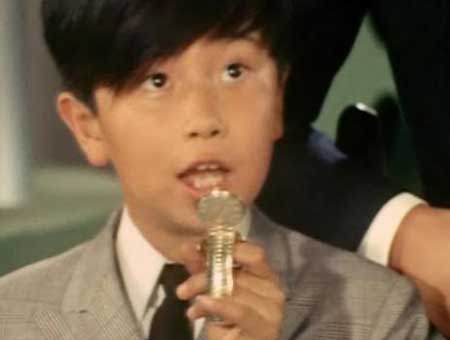 “Johnny Sokko And His Flying Robot” was my favorite of the 2 series which always began with a memorable robot “arm dance” that ends with bullets emanating from its fingertips. This highly odd looking robot (which resembled more like a giant king tut wearing parts leftover from the “Lost in Space” series) was the centerpiece warrior controlled by a young boy by the name of Daisaku Kusama (Johnny Sokko character). The series which was overdubbed in English and renamed was originally called “Giant Robo (tokusatsu)”

Now at the time of air, one was “lucky” if they ever caught the “original” episode which explained why this little boy was left controlling one of the most powerful forces in the world. Though those who never got the chance will delight in the fact that this complete DVD set issued by “Shout! Factory” contains all 26 episodes from front to back (Total 675 minutes!!). So better later than never I say! 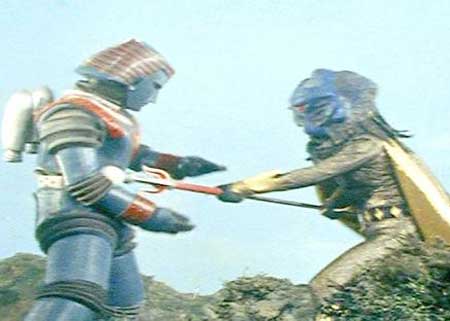 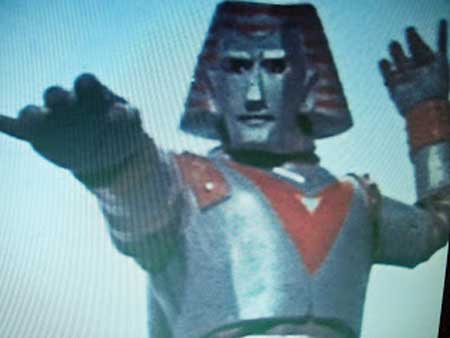 Johnny Sokko who befriends a young agent by the name of Juro Minami(Jerry Mano) washes ashore as the 2 just barely escape an attack on an ocean liner they were traveling on. As they investigate the strange island it soon becomes apparent that the island is a lair for the notorious gargoyle gang who have been building a giant weapon. Yep, it’s a robot and just so happens to be voice activate by the first voice it hears. Sokko who is aided by the creator who gets killed in a shoot out happens to be that first voice spoken into the controller watch device (thus making him the master to this mountain sized fighting machine). Juro Minami who is an agent for the top secret Unicorn organization takes Sokko under his wing to fight off equally giant monsters and creatures usually orchestrated by the nefarious gargoyle gang and its evil leader “Emperor Guillotine”.

The Gargoyle Gang becomes the prime villainous organization intent on world destruction creating an antagonist for the series. The team is presented in the sense of an Asian Nazi-style gang led by various evil leaders up to nefarious no good.

What might easily become a subject for chuckle is the fact that Sokko begins shouting out robot weapon commands from the very first episode that trigger devices within. How this young kid who just acquired a controller wristwatch might know anything about the robot is left to viewer acceptance flaw that just goes with the territory. The robot actually possesses several fighting devices such as his finger missiles, eye beams, a flame thrower, a bazooka, electric wires, and his famed “burning cross” technique. 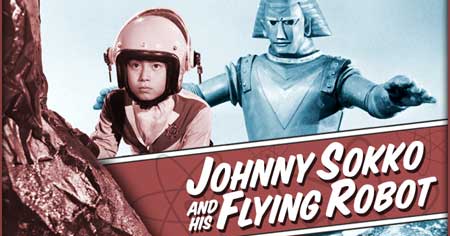 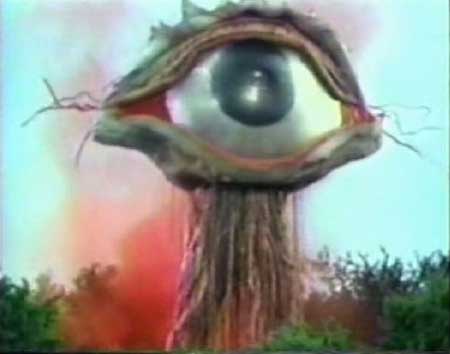 The series takes on many opponents making each episode sort-of a “creature of the week” fight off with a variety of names that include: “Dracolon”, “Lygon”, “Scaleon” and so on….. Fans of the Godzilla franchise would easily slip into the rhythm of this series which uses a similar-model to man in suit approach to filmmaking. At the time, Godzilla style moves were very much the trend. “Johnny Sokko and His Flying Robot” was indeed early sci fi action that really worked for the time if its arrival. Now years later, sporting a title that future generations have yet to experience (or heard of), this remarkable series can finally be enjoyed for its dated but enjoyable presentation. 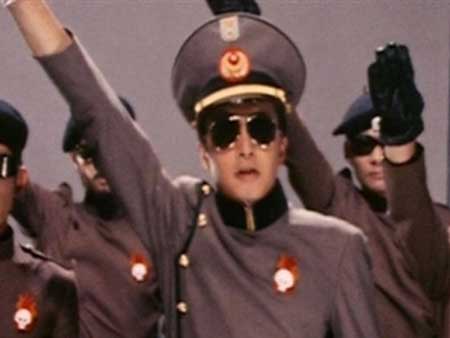 When Mill Creek released “InfraMan” in DVD set form, I was sure that Sokko was soon to follow. Maybe its release didn’t come as soon as I hoped, but none-the-less its here now and ready to revive a TV tradition lost but not forgotten. Make sure to give worthy props to “Shout! Factory” for their efforts!