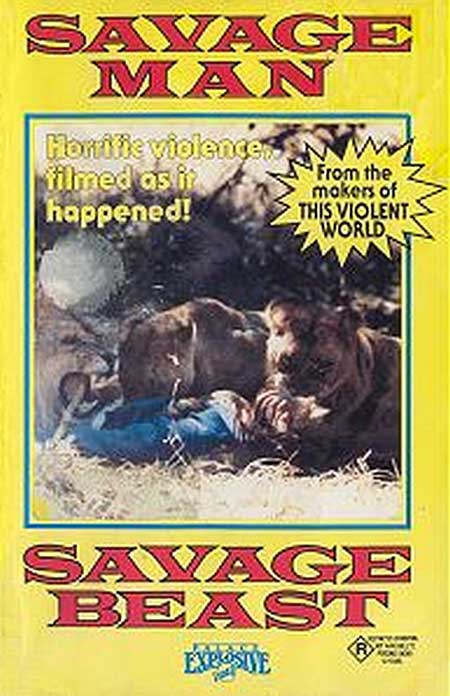 Bizarre rituals, animals being killed, and people being killed and eaten by each other and animals

Savage Man Savage Beast, aka Zumbalah, aka Ultime Grida Dalla Savana, aka Savage Temptation, aka The Great Hunting, aka (simply and appropriately) Deathshow, is one of the more influential early “shockumentary” films. Seen as a nature documentary in which the cyclical food chain is depicted (animal eats animal, man eats animal, animal eats man) by some, an offensive display of animal cruelty by others, and a little bit of both columns by still others, this film belongs next to movies like Mondo Cane and Faces of Death as one of the video store rentals most often bragged about by kids to show how cool they were: “Yeah, that movie looks pretty gross, but have you seen Savage Man Savage Beast? It has real death in it!” While we can now find videos of beheadings and assassinations and a Canadian p*rn star killing and eating a dude with a quick internet search, back in the video store heyday these films served as rites of passage for kids. 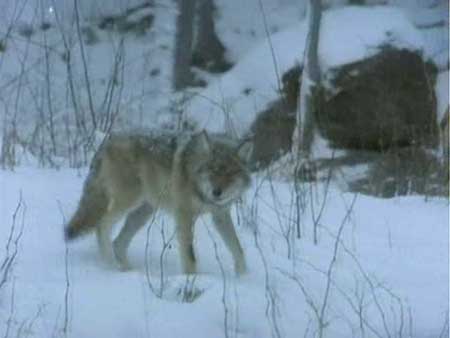 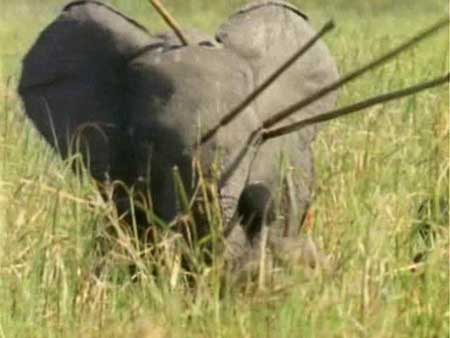 Savage Man Savage Beast is a lot different than something like Faces of Death, which is probably the most popular of this type of film, in that its main focus is on the hunting of one animal by another, whereas many of the scenes in Faces of Death show people being killed (kind of). However, there are a lot of similarities as well. Savage Man Savage Beast has the expected narrator, a calm, seemingly rational voice that sounds poetic and philosophical at times, giving us the background information on what is flashing on our screen. It also has fake footage of humans being killed – there are two specific scenes here, according to the book Sweet & Savage: The World Through the Shockumentary Film Lens by Mark Goodall, where a tourist is mauled by a lion, and then when mercenaries capture, kill, and castrate a native, that may look real (or, at least did in 1975), but are indeed fabricated. Most of the animal footage, however, is not fake at all. Some might be set up for the purpose of the film, but the deaths are legitimate. 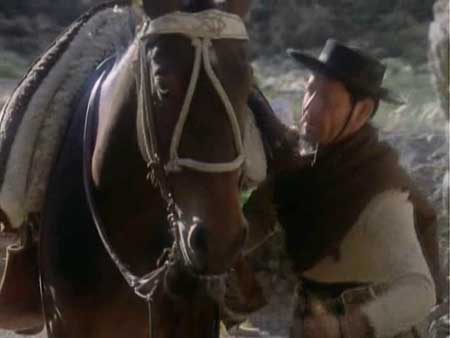 Savage Man Savage Beast is written and directed by Antonio Climati (a cinematographer for films like Mondo Cane and Goodbye Uncle Tom, he also directed the original documentary called The Green Inferno) and Mario Morra (a film editor who also directed Sweet and Savage with Climati). They provide a very well filmed collection of scenes of animals in their natural environments, which unfortunately for some of them is at the bottom of the food chain. They also posit a handful of theories regarding people and their relationship with nature, pointing out that humans scare animals, and hunt them, but still have an idyllic dream of being one with nature and animals despite it all. They also bash on the animal rights crowd, frequently showing groups or communes of hippies protesting hunting – at the same time, they manage to sneak in a whole lot of nudity in this “effort” to show both sides, then condescend them by saying they care about elephants but not fish, or saying they are protesting the hunting of one wild animal, but eating hamburgers while doing so. In other words, there is a slant to their “political” narration here. But that isn’t why most people watch a movie like this. 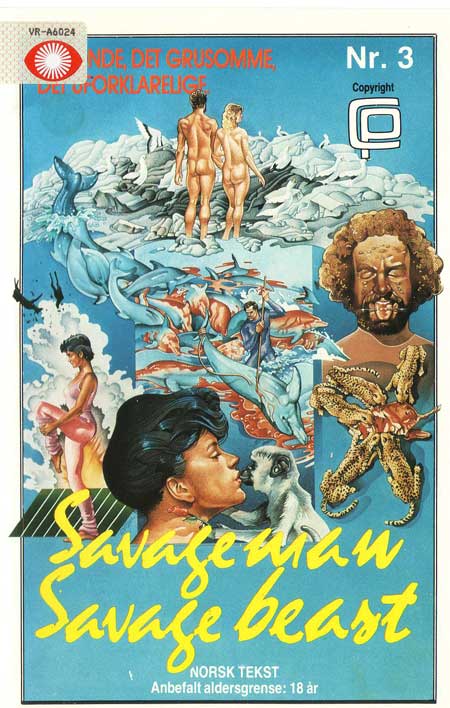 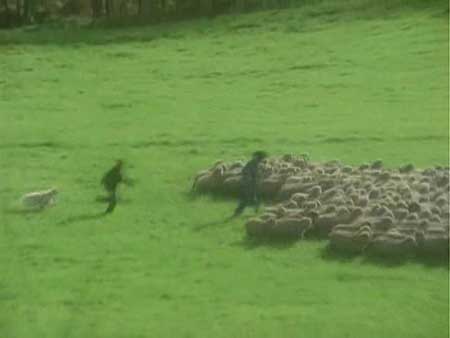 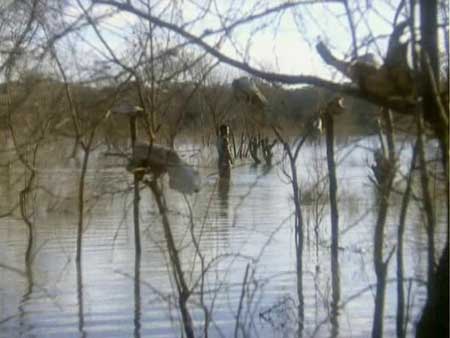 There’s a whole lot of animals getting killed in this movie. If that’s your thing, then this is for you. You’ve got humans hunting deer and foxes with guns and on horseback, as well as native tribes hunting bats and elk with spears and boomerangs. You’ve got leopards attacking and eating orangutans, anacondas suffocating little monkeys, and even a cheetah, the world’s fastest animal, pit against an ostrich, the world’s second fastest animal – you can guess which one gets eaten. But in addition to the animal footage, you’ve also got footage of native tribes and their hunting rituals. One tribe digs holes in the ground and then has intercourse with them, thinking they will fertilize the earth and bring more of their preferred prey. Another fashions tubes with skulls on them and then masturbates with them into the sea, another approach to bringing about a plentiful population of animals to hunt. 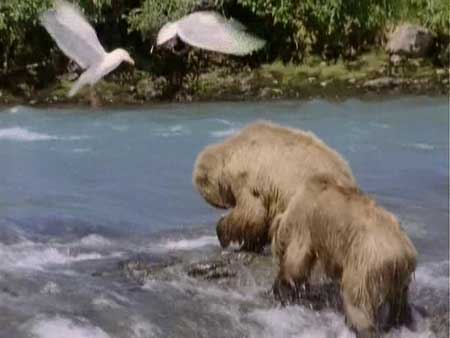 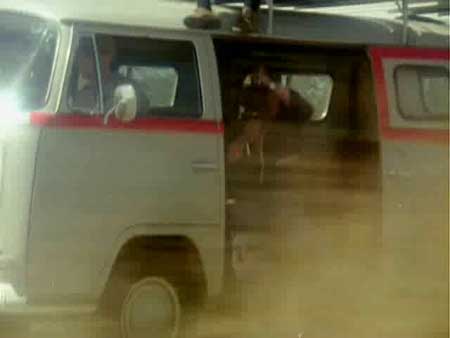 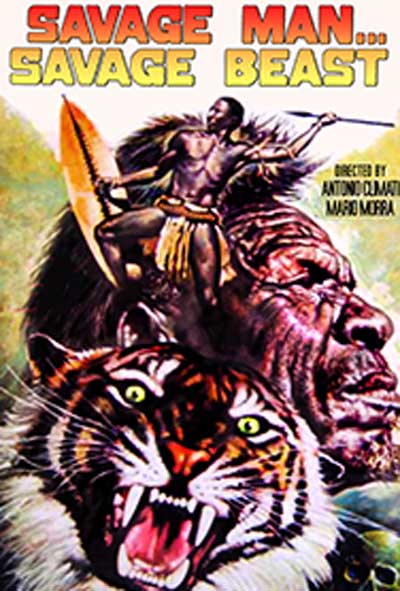 Savage Man Savage Beast is a pretty wild one, but also a very influential film. How influential, you ask? This style of filmmaking, and this film in particular, was a huge influence in movies like Cannibal Holocaust and Cannibal Ferox, which of course then traces forward to the found footage phenomenon. In Hong Kong in 1976, Jaws was the number one film; number two? Savage Man Savage Beast. That in and of itself is impressive and cannot be denied. However, the question remains – how does it hold up today, over 40 years later? It seems dull, to be honest, and looks very dated. Obviously it was an important film for its time, but unless you’re a big fan of nature documentaries of the “shockumentary” style, this is probably one that you’ll pass up.