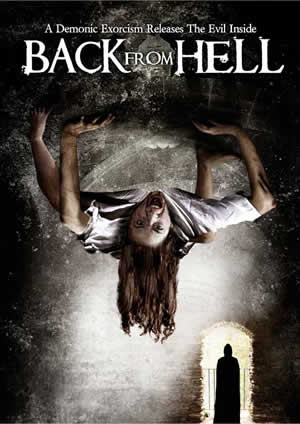 SYNOPSIS:
Six college friends reconnect when they travel to a remote home for vacation. The location begins to have a strange effect on their personalities and moods, especially after they unknowingly summon an evil spirit with an Ouija board. Soon, the group suspects that one of their friends has become possessed and they bring in a priest from a neighboring Church. Things go from bad to worse as a demon begins to claim its victims.
REVIEW:
Back From Hell (Ex Inferis) is another found footage possession film along the lines of The Devil Inside and The Last Exorcism, except it takes a Cabin in the Woods approach to the story and how the characters approach the conflict. Director Leonoardo Araneo tries to stitch together a cohesive storyline from the events, but they are all either too derivative or too boring to elevate the film above mediocrity. The film suffers from been-there-done-that familiarity from the set up to the effects to the possession itself. While it does manage to include a few novel and shocking events, it never establishes its own identity. The acting is below par, but never unwatchable, with certain characters being far too abrasive. Regrettably, Back From Hell is a film difficult to sit through for all the wrong reasons. The movie strives to be far more coherent and competent than the end result achieves. 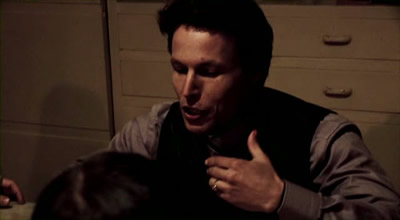 One of the things low budget, found footage films rely on is the talent of its cast for being natural without being too professional; the genre seems to thrive on the actors being more “real” and neighbor-next-door. It tends to be more realistic if the characters feel as if they are unrehearsed bringing a documentary approach. This freedom does not help the cast of Back From Hell  sadly. The lines are delivered with a heavy stiffness combined with forced emotions backing them up. The six leads rarely feel like friends, either now or when they were to have been in college. It’s difficult to believe they ever care for each other when the situation goes south. Since this is a foreign cast speaking in English, it may a case of lost-in-translation, but the result is a very stilted delivery robbing the film of engaging its audience. There are some exceptions that make some of the scene more palatable than others. When Mark finds his friends dead, covered in blood, his reaction is both wholly believable and intense. And Andrew’s reaction to the first death in the film is shocking in its simplicity. 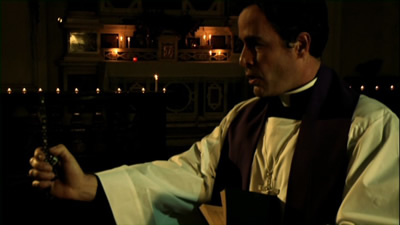 It’s when the film tries to compete with films like The Devil Inside or The Last Exorcism that it falls totally flat on its emotionless face. Roberto Zibetti does not have contortionist skills or hyper-mobility that Ashley Bell or Bonnie Morgan. The shots of the actor attempting to twist his body in odd way is also free of any sound effects and proper editing; the result is almost laughable. The actor later begins to speak in a high pitched voice to simulate possession; instead, it comes across cartoonish, as if it were Pee-wee Herman on crack. The film also rarely uses make-up effects to accentuate possession as well. Given that the direction, sound design and special effects are never supporting the actor portraying a character possessed, he did rather well all things considered. But, still, without that support, his efforts come across as ineffective and silly. 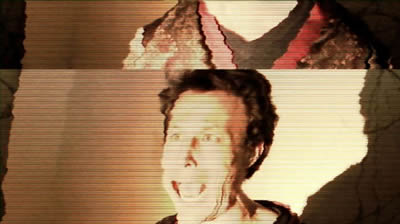 With it effects, Back From Hell is a mixed bag. There are a few things that are interesting. An early death that involves a young couple is quick, intense and shocking. It’s a rather simple prop-effects shot that amps up the fear factor. Later, a mysterious puzzle box is found with odd markings on its side that light up – the prop is again simple and effectively eerie. Another effect, an editing effect, is also simple but is used with mixed results and used far too often. Whenever the demonic spirit is present, the film begins to stutter and blur with fuzz and “snow” with the sound design thumping a combination of hums and buzzes. It is very much like the effects used in The Fourth Kind whenever the alien encounters were filmed. It is intended to be frightening but the effect comes across more annoying than anything. What makes it on screen for Back From Hell fails to live up to the ideas the film wants to portray, resulting in an underwhelming experience for its audience. 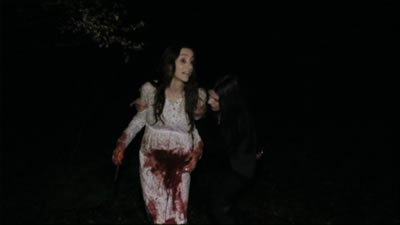 Director Leonardo Araneo shows much more potential in what he attempts than in what he commits to film. There is promise in his approach, cinematography and blocking. If he had a better script, better actors and better effects – along with a bigger budget, Araneo has the promise of delivering a worthwhile product. Back From Hell, however, isn’t that film. He repeatedly sets up scenes, having them escalate to a tense conclusion. Regrettably there is too little emotion behind the set up to produce the shocks and emotion to make them frightening, impacting or memorable. To it’s credit, the film does not look like a cheap knock off or student film, the film looks far better than it is. The director drops the ball when it comes to the cast, having difficulty establishing relationships and emotional bonds throughout. The one bond he manages to establish between a father, mother and their unborn child, results in one of the films few shocking moments. 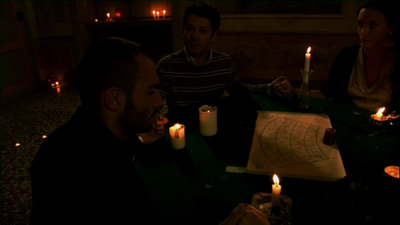 Back From Hell is a silly blend of exorcism and found footage with bad acting, lame effects and a poor script. While it has an interesting premise, it stumbles over its own efforts to scare its audience. The biggest issue with the film is its dependency on the relationships of its six leads without effectively providing those relationships beyond the most simplistic efforts. There is no emotional draw into their story. This, combined with a poorly executed possession plot, makes Back From Hell a tough sell to even the most curious of film goers or fans of found footage. Even thought the director shows promise technically, Back From Hell is a film to steer clear of.
2 out of 5
Back From Hell (2011)
Share