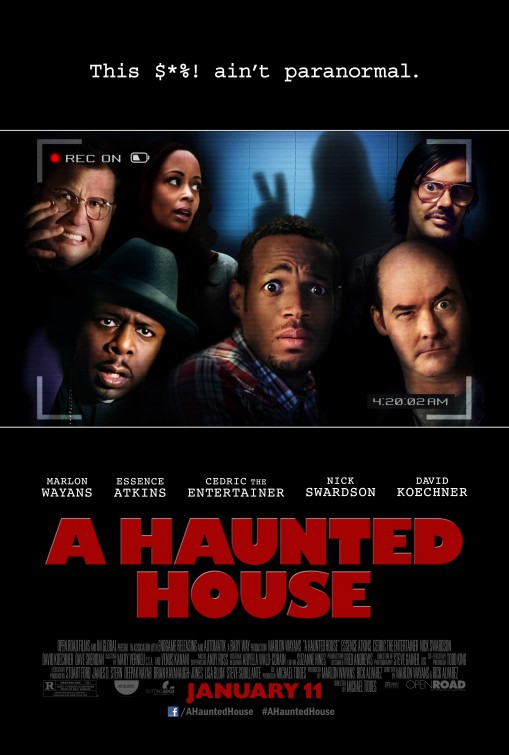 Malcolm and Kisha move into their dream home, but soon learn a demon also resides there. When Kisha becomes possessed, Malcolm -determined to keep his sex life on track – turns to a priest, a psychic, and a team of ghost-busters for help.

The calendar year 2013 has not gotten off to a very good start for me movie wise. First I watched “John Dies At The End” which was just OK. Then I subjected myself to “Texas Chainsaw 3D” which was a little less than OK and now that I’ve returned home from “A Haunted House” I think it’s safe to say that I’ve yet to see a good movie released so far this year.

A product of the Wayans Bros. conglomerate but written & produced by Marlon Wayans, “A Haunted House” purports to be a spoof on films as varied as “Paranormal Activity”, “The Devil Inside”, “The Last Exorcism”, “The Exorcist” & maybe just a bit of William Girdler’s take on exorcism films, “Abby” (1974). Unfortunately none of these films lean towards anything funny and in trying to milk laughs from what is an essentially laugh free sub genre “A Haunted House” only takes the premise & proceeds to force as many predictable, unfunny jokes into it as it can. 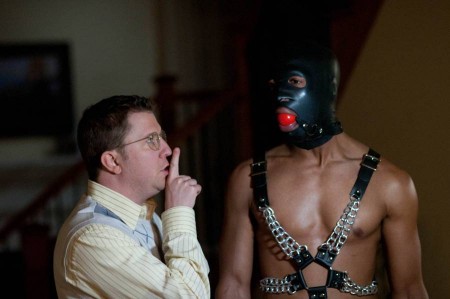 Marlon Wayans plays Malcolm, a young, successful man who is about to change his life by inviting his girlfriend, Kisha (Essence Atkins), to move in with him. His home is very similar to the homes seen in all of the “Paranormal Activity” films and comes complete with a nifty looking pool & a Spanish housemaid, Rosa (Marlene Forte). We never find out what he does for a living but in a film like this does it really matter? As soon as Kisha moves in she notices things are going ever so slightly wrong, like her keys being on the floor when she knows she left them ON THE TABLE! Little things like that and glasses sliding right off of kitchen islands, pots falling from their hooks onto Malcolm’s head lead him to believe that maybe Kisha has brought a ghost along to live with Malcolm when she moved in. She then admits to making a deal with Satan when she was younger in exchange for a pair of Louboutin shoes.

Malcolm hires a home security expert, Dan the security man (David Koechner) & his dim brother Bob (Dave Sheridan) to install security cameras throughout his home and have the cams wired to his computer so that he can review the footage at his leisure. The footage reveals the extent of the horror that Malcolm & Kisha have to face. Well…maybe not so horrible for Kisha since she get ravaged by the demonic force in one scene and she really seems to enjoy it. In a later scene, Malcolm also gets a booty call from the ghost that isn’t as pleasurable an experience for him as it was for Kisha. 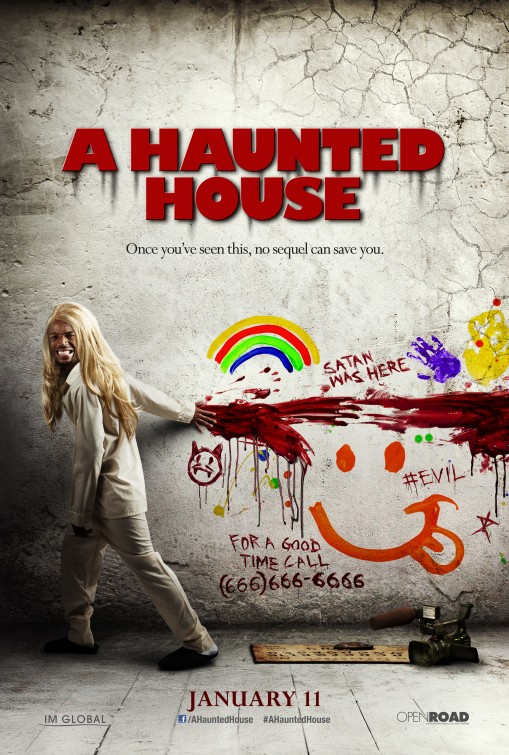 As the film continues Malcolm hires Chip the psychic (Nick Swardson) to help get rid of the evil but all Chip seems to be interested in is Malcolm’s body & whether or not he’s ever been with a man (Actually one of the very few laughs I got from the film). Malcolm also has to deal with his kinky friend, Steve (Andrew Daly) & his hyper sexual wife, Jenny (Alanna Ubach) who are constantly trying to convince Malcolm & Kisha to join them in some shared sexual activities. He brings in his cousin Ray Ray (Affion Crockett) & his crew of homeboys to try and threaten the spirit out of the house using thuggery but that doesn’t work out too well either (The only scene in which I laughed out loud for a second). Eventually Malcolm retains the services of Father Williams (Cedric The Entertainer) to exorcise the demon that has now possessed Kisha’s body and with the help of Dan, his brother Bob & Malcolm a final effort is made to bring peace to Malcolm’s home. 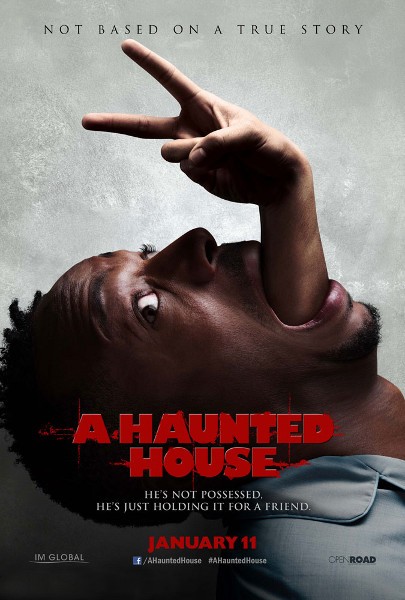 The biggest problem with a movie like this is that it’s biggest laughs are already featured in all of the commercials you’ve seen on TV in the last few weeks leading up to it’s opening on January 11th. There are a few other laughs of a more graphic nature that you won’t see on TV but they are few and far between. Another critical error it makes is in milking what few laughs it has way past their expiration date. One funny bit features Kisha getting up from bed in the middle of the night and just standing there watching Malcolm as the camera records her. In the “Paranormal Activity” films this type of scene sometimes led to a major jump scare, sometimes it led to nothing but the fact that the woman is acting very oddly. Here Kisha stands & watches Malcolm for a bit and then breaks into all sorts of dancing accompanied by some hip hop music. It happens so suddenly, with the camera speeding up her exaggerated gyrations that it is funny, for 5-10 seconds. But the scene is milked to the point of no return by director Michael Tiddes. Another example of this happens earlier in the film when Malcolm is anxiously awaiting Kisha’s first night in his bedroom as a co-inhabitant & not just a visitor. He decides to “Practice” some of his sexual prowess on his stuffed animals and puts them in all kinds of positions as he gyrates his pelvis either behind them, on top of them, underneath them, you know what I mean. It’s marginally funny for a few ticks but the scene just goes on & on with Malcolm getting sweatier and adding more stuffed animals to his escapades for what felt like five minutes. It ceased to be funny after 10 seconds and it’s evidence of a reed thin script that had to have scenes like this stretched out in order to get this flick somewhere close to 90 minutes (It’s 86 minutes long counting some outtakes & a long end credit scrawl). 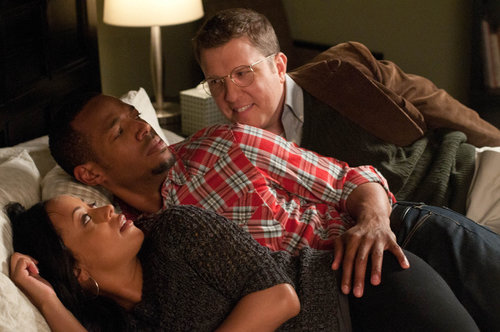 This stuff just isn’t funny folks although the audience I saw it with was screaming with delight throughout the film’s running time. It was then I realized that Wayans & company are merely pandering to the lowest common denominator here. This is the kind of film that 16 yr. old boys & girls will go nuts for & while I’m not trying to demean the youth of today by saying they’ll probably like this it certainly sounds that way doesn’t it? No one has ever gone broke trying to entertain the masses with some lowbrow entertainment but that doesn’t mean that it makes it the right thing to do either. I’m sure the Wayans family has amassed a nifty little fortune with humor of this ilk but they have shown that they are capable of much better and quite frankly I’m disappointed that Marlon feels that this kind of entertainment is good enough for fans of the Wayans family as a whole, because it isn’t. It feeds into stereotypes that shouldn’t be perpetuated in this day and age (Drug use, promiscuity, gang violence) and it ridicules the seriousness of all of this by trivializing it in an especially unfunny spoof of a genre that isn’t really all that great to start with. It also attempts to make light of child abuse during some flashbacks that Kisha has back to her childhood when her stepdad beat her as her mother drank beer & encouraged the beatings. I find this extremely distressing and depressing as well. I think inner city audiences (And let’s face it, they are who this film is geared to) deserve better. 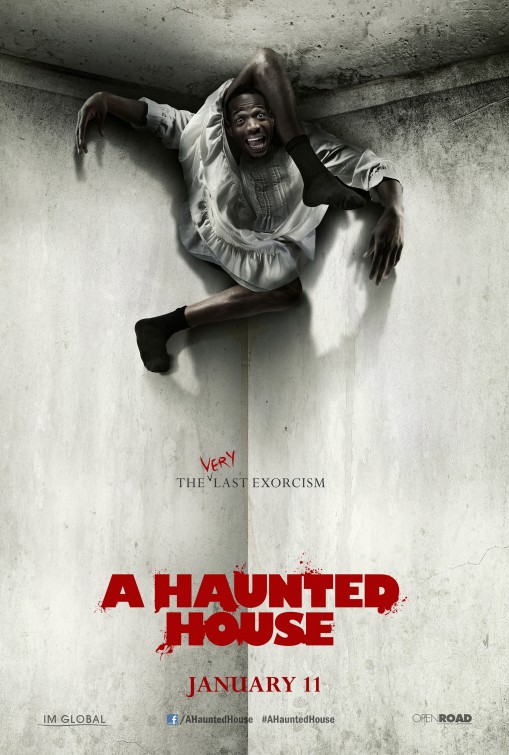 But like I said, the audience I saw this with thought the film was an absolute hoot & I’m not here to begrudge them their opinion. I just happen to think that “A Haunted House” is an especially dull, mindless & rarely funny film that will probably make a mint at the box office this weekend. Which in turn will lead to a sequel which will be just as unfunny, and so on, and so on. That’s not funny acolytes…that’s just sad.