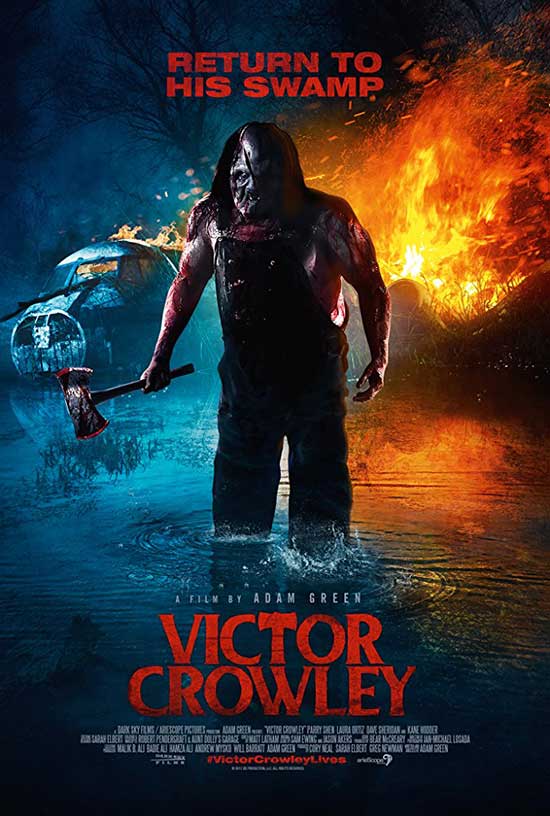 The sole survivor of Victor Crowley’s murderous rampage that occurred ten years ago reluctantly agrees to return to the swamps where it all took place to film a television special after being promised a considerable amount of money. Unfortunately, Victor has returned and he’s just as angry and violent as ever before. Will he make it out alive again or is he destined to be torn to bits just like all of Crowley’s other victims?

Victor Crowley is back and I couldn’t be happier! I love the Hatchet films so I was super stoked when I heard about Victor Crowley and I couldn’t wait to see it. I’m happy to say that it is just as awesome as the other three films in the series and that Adam Green has knocked it out of the park yet again. Victor Crowley is an awesome, brutal movie loaded with tons of fun, gory deaths, a wonderful cast, and the excellent humor that we’ve all come to expect from the series. I loved this movie and can honestly say that it is one of the best movies I have seen in a very long time.

I really dug the premise and thought that it terrific. Parry Shen (who has played multiple characters in the series) returns as Andrew Young, the only person to survive Crowley’s wrath in the third film and has written a book about the experience. He is a pseudo celebrity now because of what he endured and while some people love him others despise him and think that he is actually responsible for the murders that Crowley committed. Against his better judgement he agrees to go back to the swamps with a television crew for some quick cash, but once he gets there Crowley is resurrected (I’m not going to spoil it by telling you how) and is up to his old tricks, leaving dead bodies wherever he goes. I thought that making Young somewhat famous was a nice touch and pretty realistic as I have a feeling that this is what would happen in real life if someone actually went through something similar to what the character did in the third film. Just like in this movie, I think that some people would be huge fans while others would hate him and think that he got away with murder. I also thought that the reason Young agrees to head back to the swamp despite everything that happened to him there years earlier worked too because really, who is going to turn down a million dollars? 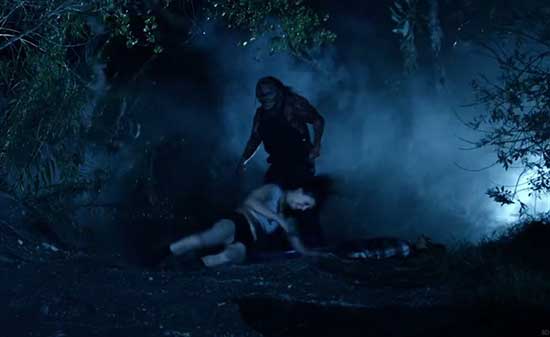 Did I mention that this movie has a very impressive body count and some great, over the top death scenes that just absolutely rule? Victor is in rare form here and we get a variety of fun, bloody, incredibly painful-looking deaths that the Hatchet series is known for. There are decapitations, a scalping (which results in someone’s brain falling out of their head), a nasty pummeling to the face with a claw hammer, ripped off body parts, a crushed head, and my personal favorite that involves someone’s arm getting torn off and then crammed up…well, you just have to see it to believe it but trust me when I tell you it is nothing short of amazing and one of the most creative death scenes I have ever witnessed. On top of that we also get a couple of nasty casualties via a plane crash that will make you never want to fly ever again as well thrown into the mix for good measure. Needless to say, this movie is bloody and violent as Hell and if you are a gore hound like I am you are going to be very satisfied. 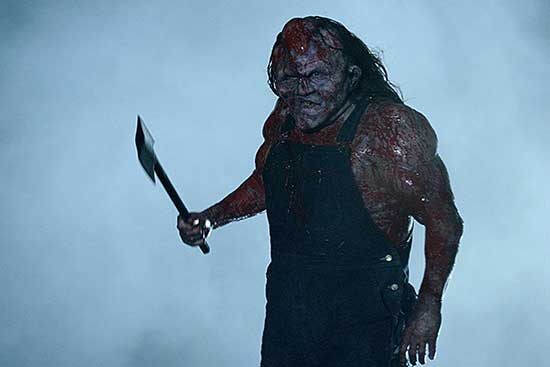 The cast rocks too and is pretty much perfect. Shen does a great job as Andrew (I love that he keeps coming back to play a number of characters) and is just a likeable guy in general that you will find yourself rooting for throughout the film. The same can be said for Dave Sheridan as Dillion as he rules and the character had a Jack Burton from Big Trouble in Little China-like feel to him and just kicks all sorts of ass. Brian Quinn (of Impractical Jokers fame) does an excellent job as Austin and genre legend Tiffany Shepis is terrific as always as his girlfriend Casey. Speaking of genre legends, my personal favorite character was Kathleen, played by the totally amazing and awesome (and pal of mine), Felissa Rose. Rose does a wonderful job playing Young’s self-centered, pill popping agent that doesn’t really seem to care about his career (or him in general) and her death scene in this film is a thing of legends that will be talked about for years to come. Of course, Kane Hodder once again rules as Victor Crowley, and it is obvious that he has a great time playing the role. All in all, there is not one bad performance from anyone in the movie and as a result I really dug all of the characters.

Victor Crowley (2017) is amazing in every possible way and I loved every minute of it. As with the other movies in the series I had a total blast while I was watching it and just didn’t want it to end because I was having so much fun. If you are into slasher films and are a huge fan of the first three Hatchet movies like I am then you will not be let down. Adam Green is a genius in my opinion and if I had my way he would continue making these movies until the end of time. Do yourself a favor and stop what you are doing and run, don’t walk, to see this film as it will blow you away (also, make sure to watch after the credits for an awesome surprise that pretty much had me cheering and applauding when I saw it). Highly recommended!