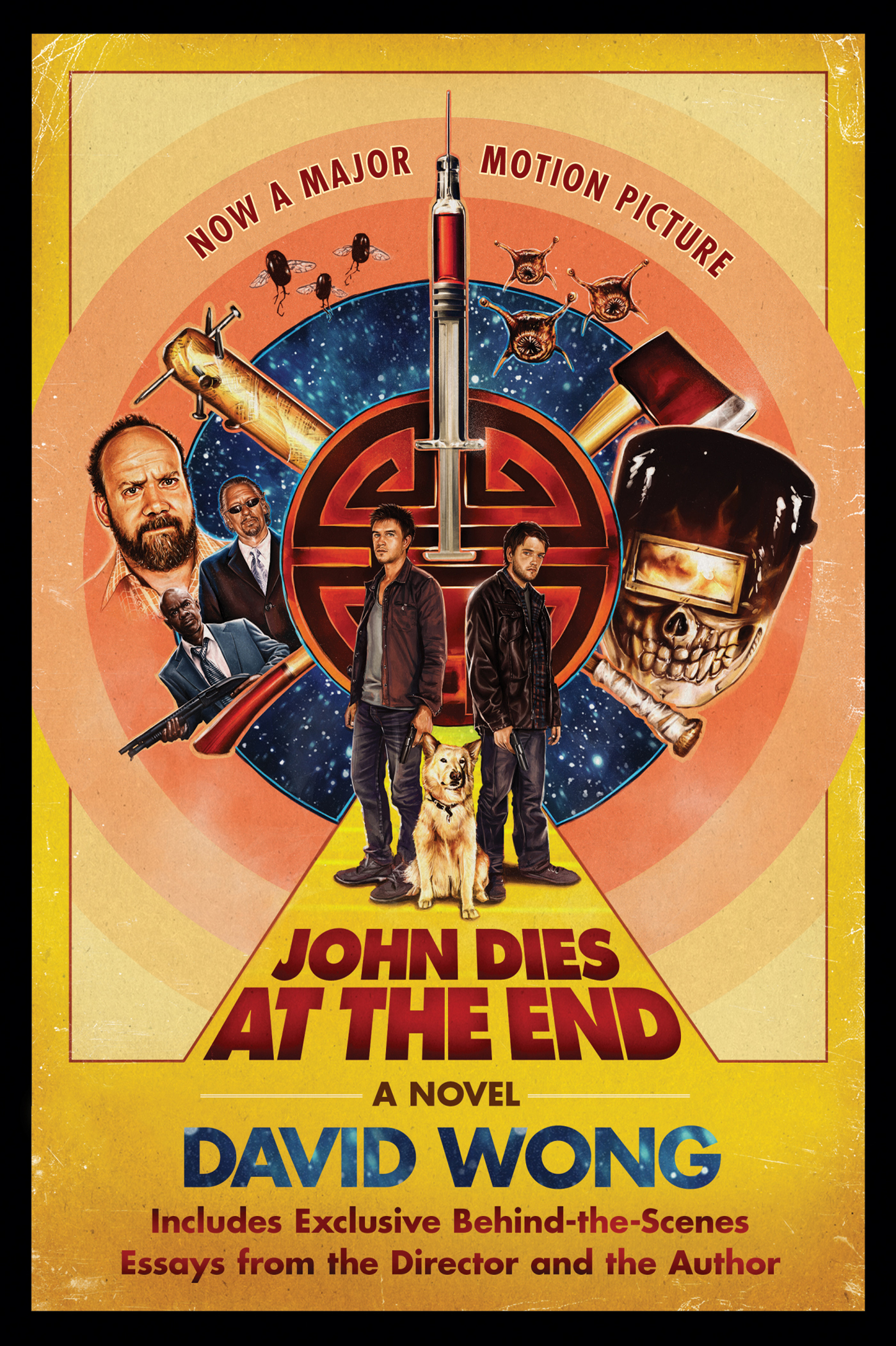 A new street drug that sends its users across time and dimensions has one drawback: some people return as no longer human. Can two college dropouts save humankind from this silent, otherworldly invasion?

It’s a brand new year and with it comes new hope for some better horror films to quench my thirst for blood, guts, mayhem & nubile young women being chased by monsters, psychos, slashers…take your pick. And the first film on my docket this year sounded like it had lots of promise. “John Dies At The End” is based on a popular story written by David Wong & directed by Don “Phantasm” Coscarelli. It features Oscar nominee Paul Giamatti & has cameos from great character actors like Clancy Brown, Glynn Turman, Doug Jones & Daniel Roebuck. It sounds like a sure fire winner, doesn’t it?

Yeeah…what sounds like it should be nothing but golden isn’t always so. Let’s begin with the plot here shall we? The movie opens with a shot of a man hacking away at someones neck with an ax. He’s narrating the scene for us as the camera draws closer to him doing his dirty deed. His name is David (Chase Williamson) & he explains to us that he is chopping off the head of a man (With a swastika on his tongue) whom he’s already shot six times. His ax head breaks off in the midst of his work so he gets up, goes to a store, replaces it and gets back to chopping off the offensive head. The ax breaks again & he replaces it again but before he can return to his work he’s confronted by a zombie he says he beheaded last year. Except the zombie has gotten his head sewed back on and he’s sorta pissed off.
Then it gets weird…. 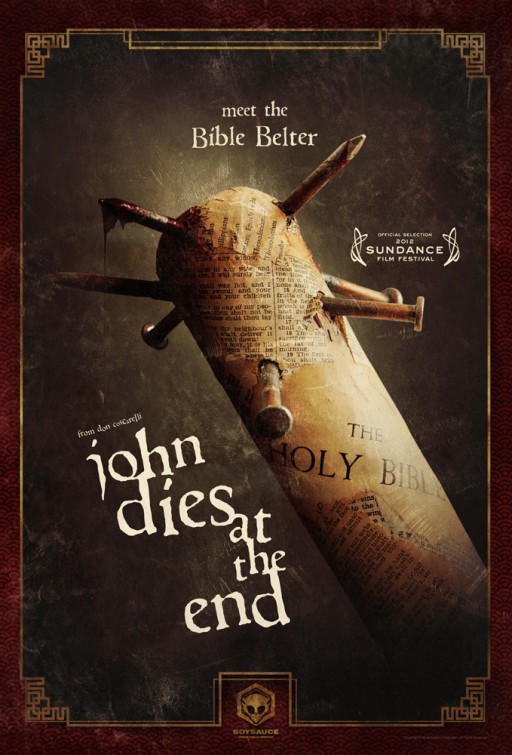 It turns out that David is recounting his story to a reporter named Arnie Blondestone (Paul Giamatti) in a restaurant. And what a story he has to tell! It seems that David and his best bud John (Rob Mayes) have happened upon a new drug that they call “Soy Sauce”. What this drug does is give whoever ingests it a type of super awareness with a psychic edge to it. Along with this new awareness comes the power to open doorways to new dimensions but, unaware to those who are using the stuff, those doorways are opened both ways. And who or whatever is on the other end of the doorway can just walk right on into our dimension…our reality. And of course, they’re not too happy to be here. 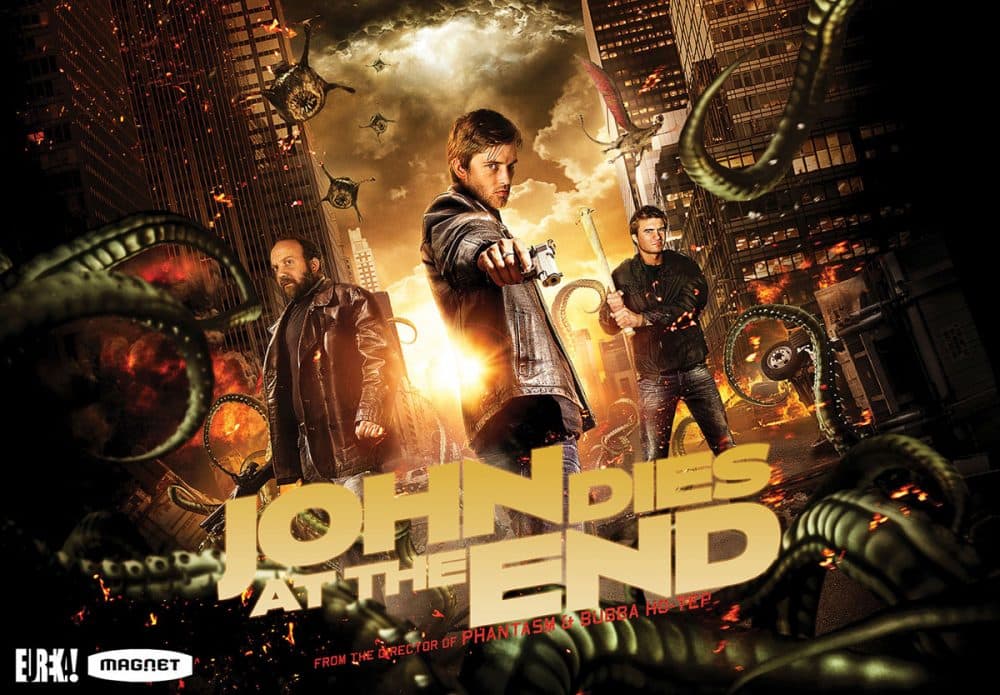 Most of the time, David’s story deals with how & why John ends up acting so oddly. Well, that and why John can call him from somewhere else while he’s walking right alongside of David. John can do stuff like that and make phone calls with bratwurst! All of these new abilities John has come from an encounter he had with a Rastafarian by the name of Robert Marley (Yup, they went there). Poor Mr. Marley doesn’t get very far into the movie but that’s OK since I was barely able to keep up with what was going on at this point. 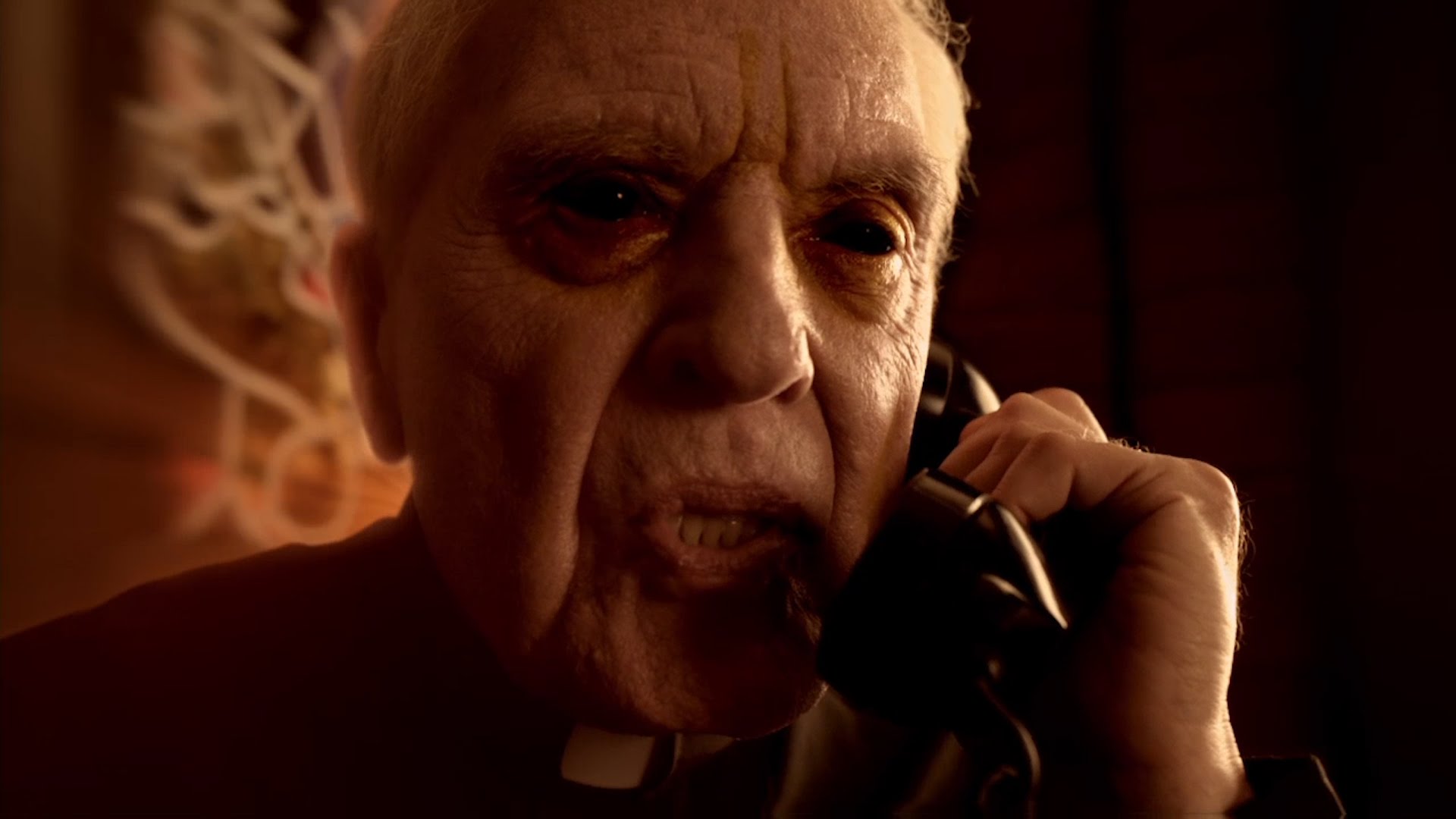 Why was I barely able to keep up with “John Dies At The End”? Well let me tell you guys some of the things you’ll be witness to if you see this movie: Humanoids (Actually just one) made of frozen meat, doors with penises in place of knobs (Great line: “That door CANNOT be opened)!, large parasites with sharp teeth, Mustaches that fly off of people’s faces and flutter around, Hairy liquids, Time bombs and a really large disgusting phlegm wad looking creature with clawed tentacles called “Korrok”. Hey…did I mention Angus Scrimm as Father Shonuff? At least that’s what I think I heard him referred to as. 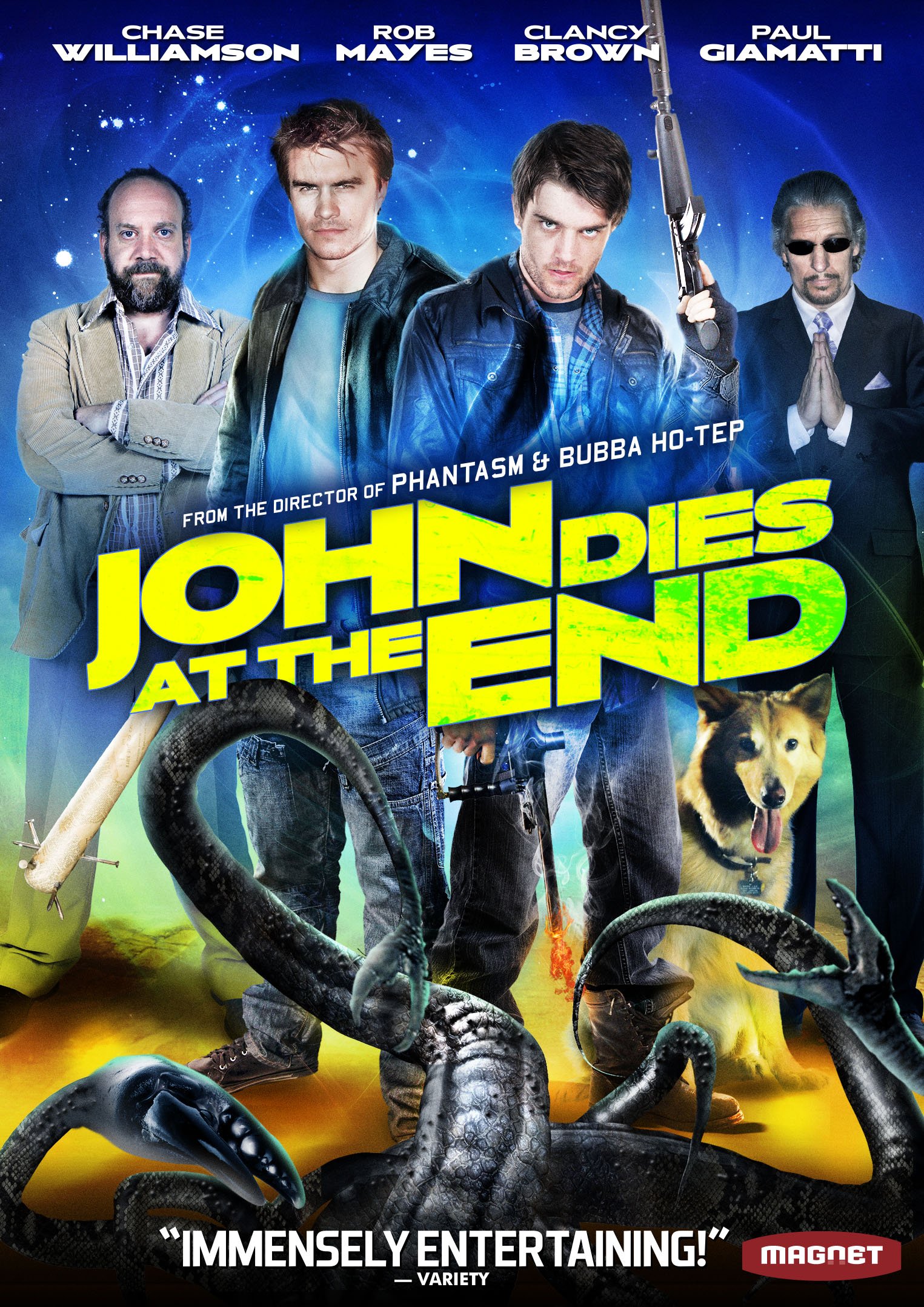 As I continued watching I couldn’t help but think that Coscarelli’s film played like a severely dumbed down version of David Cronenberg’s “Naked Lunch”. They share the same sort of (Non)sensibilities except that one of them goes for laughs and for the most part, fails. Coscarelli wrote the script and although I haven’t read the story it is based on, I have to believe that he didn’t stray too far from the source material. If I’m right then I guess I wouldn’t dig the story too much either. The biggest problem I had with this movie is that it wears it’s oddness on it’s sleeve way too much. It tries so hard to be quirky & odd that it just becomes boring. I don’t think “Cult” movies can be made purposely, at least not successful ones anyway. My belief is that “Cult” movies end up being called that by sheer happenstance & nothing more. You just can’t force a movie to be a “Cult” movie, it has to happen organically without thought. You think Tod Browning made “Freaks” expecting it to become a Cult film? Did Paul Verhoeven make “Showgirls” with cult success in mind? Did David Lynch make “Eraserhead” hoping that it would find everlasting fame as a cult film? I’d bet a pretty penny he didn’t. 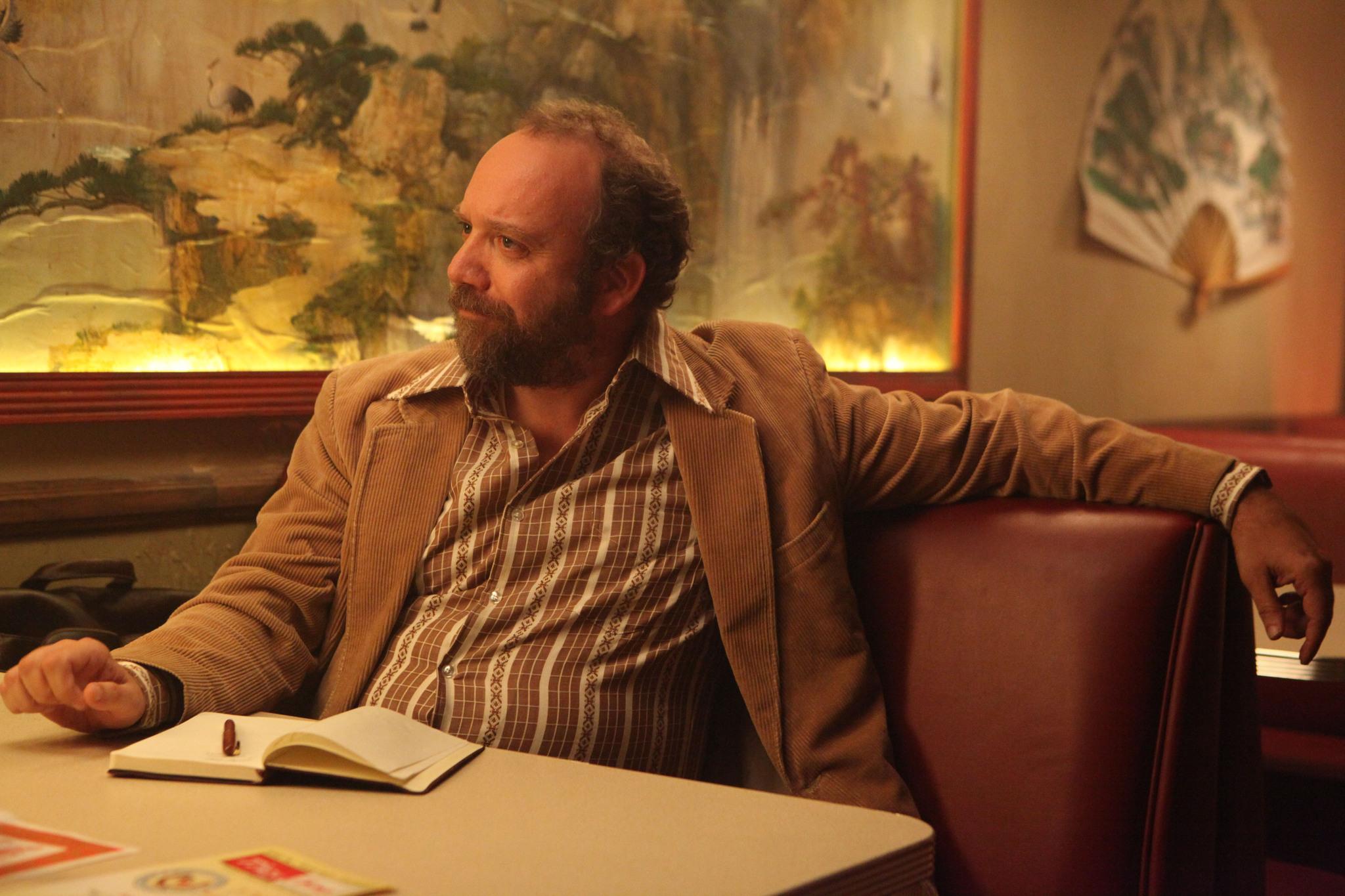 The acting here is mostly of the “Smirk at the camera” style that I find really annoying after awhile, but I enjoyed it despite my annoyance. There is a palpable cameraderie going on between David & John and I liked the way Mayes & Williamson played off of each other. Giamatti does his usual yeoman-like work here although his character becomes really annoying at the end. Glynn Turman has a nice role as Detective Lawrence ‘Morgan Freeman’ Appleton and he makes the most of his sparse screen time. Clancy Brown is in the film for about 3 minutes total but he has a pivotal role here and he makes his presence felt when he’s on screen. It’s rare to see Doug Jones in a film without prosthetics all over his body and although he’s not around too much here either, he’s really creepy when he is.

The special effects in the last 20 minutes of the film are kinda cheesy looking but I think that was more by design than anything else. It’s such an odd movie that the slightly dodgy effect work fits in just right so I’ll give them a pass. But as a whole, “John Dies At The End” failed to entertain me much. Like I said earlier, it tries way too hard to be quirky & odd. It wants so hard to be recognized as a cult movie that it forgets that it needs to be an entertaining movie. Such a pity, I was really hoping to like this one.