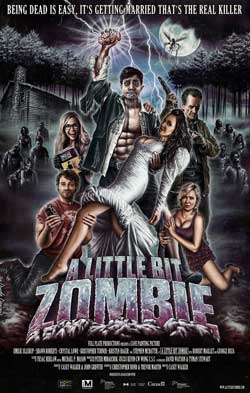 While Steve, Tina his bride to be, best friend Craig and sister Sarah take a weekend cabin retreat in attempt to put friction aside, something goes awfully awry. Infected with a ravenous insatiable hunger for brains, Steve grapples with his affliction and the fireworks erupting between his finance, family and friends.

I first had an opportunity to see Casey Walker’s debut directional endeavor at this past year’s Canadian International Film Feast in March. While regrettably I was unable to attend the final evening’s festivities the comedy/horror mish-mash was a runaway hit scoring the rising star award.

Instead I watched this laugh out loud, skin crawling avant-garde to a genre that has swept the world over on The Movie Network. As part of the Halloween line up to spook, chill and scream fans into ecstasy, A Little Bit Zombie was a welcome, unexpected treat.

It’s no mystery as to why director Casey Walker often sighs dramatically whenever asked questions pertaining to the making of the film. Without question there were trials, tribulations and more trials along the way. The final product is indicative of the blood, sweat and tears that was put into the motion picture.

It’s refreshing to see Canadian produced, directed and cast films are being taken more seriously. There was a point in time in cinematic history when Canadian was a synonym for insomnia cure. Movie goers, critics and industry players would avoid the very notion much like the skin crawling content seen from reel to reel. 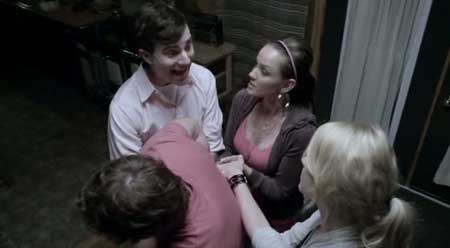 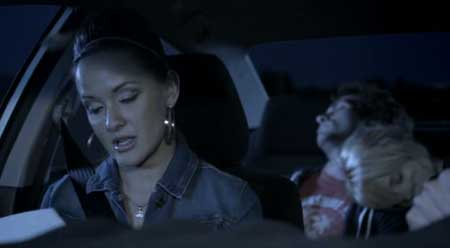 I’m a big fan of the innovative cinematography utilized from the beginning. It isn’t easy to provide a creative and original slant in a tiresome, redundant genre. We get a glimpse through the eyes, or point of view if you’d rather of a flying mosquito. The action is captured in most cleaver manner and fixates the audience in spell binding wonder to see what will unfold next.

The laughs are a plenty and delivered from each of the cast equally. We cringe as Steve played by Kristopher Turner bends over backwards to appease his overbearing finance. Crystal Lowe who plays Tina is his bride to be and is the bitch we love to hate. She delivers a stellar performance in getting under every one’s skin with her obsessive compulsive manner. Craig (Shawn Roberts) is the pot smoking, beer guzzling party animal that refuses to grow up. It’s not rocket science to see where the laughs are delivered here. His girlfriend and Steve’s sister Sarah played by Kristen Hager is most welcome eye candy unto the male demographic and we can’t help but engage in side splitting laughter from her whimsical quips often at the expense of Sarah.

Stephen McHattie and Emilie Ullerup are Max and Penelope Pendleton respectively. They’re zombie hunters with a mission to either capture the infected for research or blow them to smithereens, depending on who of the two some you speak to. The sexual innuendo and friction between the two is priceless, endearing and keeps the audience begging for more. 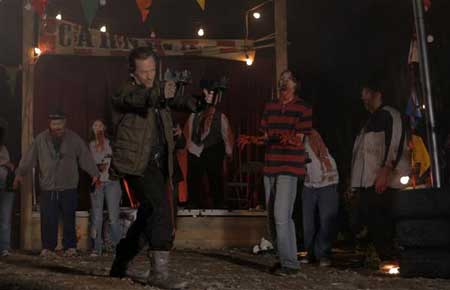 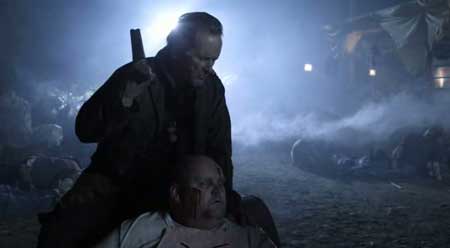 We even get some memorable snippets of Canadian veteran actor George Buza who plays a wild game butcher Capt’n Cletus. You’ve probably seen Buza cast at least a half dozen times as a gangster, bouncer, outlaw biker or all around tough guy. It’s refreshing to see him in a different role and guaranteed the chemistry between him and Steve in the butcher shop truly steals the show.

Perhaps most outstanding about A Little Bit Zombie is the special effects and make up. If it doesn’t make your stomach churn, skin crawl or at very least a set aside your popcorn for a scene or two I’d say you’re completely oblivious to the gross out principle. Steve’s newly found insatiable hunger is captured well and it’s interesting and comical to see the provisions he’s undertaken to cope with his unholy hunger. 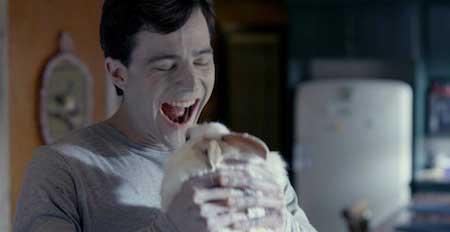 If there had to be one gripe about the film I’d have to say I was a little disappointed with the final sequences. Granted many a horror based story line ends in tragedy, there’s no denying that. The tragedy that ensues here is a little bit absurd even for a comedic horror film and had rendered me a little bit short changed. In spirit of the whole over the top nonsense I suppose there is a valid argument from some that the tone and pace was maintained until the very, final credits. But don’t just take my word for it, Casey Walker’s A Little Bit Zombie has achieved ten awards ranging from Canadian Film Maker’s Best Feature Film to Honolulu Film Festival’s Gold Kahuna Award.