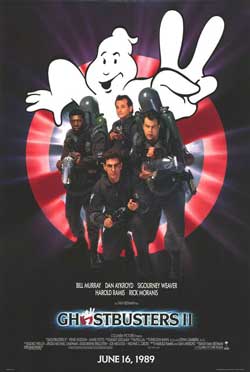 The discovery of a massive river of ectoplasm and a resurgence of spectral activity allows the staff of Ghostbusters to revive the business.

The monstrous success of “Ghostbusters” in 1984 guaranteed that a sequel would be put on a fast track to get made. Columbia pictures put immediate pressure on original writers Dan Aykroyd & Harold Ramis to script a sequel as quickly as possible. Pressure was also put on director Ivan Reitman to assist with the script and begin pre-production on “Ghostbusters 2“. All three of them were hesitant as they believed that the original was a stand alone film and they wanted no part in a sequel they never planned on making. As naive as that may sound (Especially today when movies like “The Gingerdead Man” and “Wrong Turn” get sequelized ad nauseum), they held out for a long time before finally acquiescing & scripting a sequel. But after watching it, a lot of people (Myself included) felt like their hearts just weren’t in it. 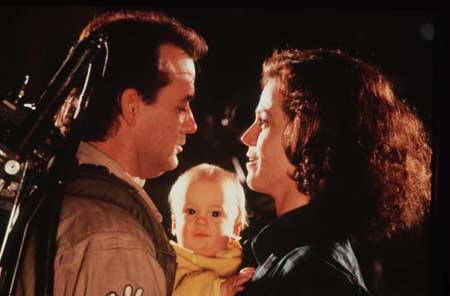 As “Ghostbusters 2” begins we find that the four ghoul grabbers are no longer in business. The numerous lawsuits filed against them for the damage done to the apartment building where they held their final encounter bankrupted them. So Stantz (Aykroyd) now runs a small occult bookstore & (Along with Zeddemore (Ernie Hudson) performs in costume as a ghostbuster at children’s parties. Spengler (Harold Ramis) is working at Columbia University and Venkman (Bill Murray) hosts an awful psychic television show called “World Of The Psychic”. None of them are happy with their situations but accept that their days of capturing ghosts are long gone. Dana Barrett (Sigourney Weaver) has gotten both married & divorced in the years after the incidents in the first film and she also has an infant son named Oscar. She now works at the Manhattan Museum Of Art as an art restoration expert and is assisting Dr. Janosz Poha (Hilariously played by Peter MacNicol) restoring some very valuable portraits. One of them features someone called Vigo The Carpathian (Wilhelm Von Homburg) whose spirit still lives on in the portrait and subsequently possesses the body of Janosz to help him procure an infant so that he can inhabit it’s body & return to rain terror on the Earth.

The Ghostbusters regroup after Dana tells Venkman that some sort of supernatural force took over her baby carriage as she strolling with little Oscar and almost ran it into traffic. Together again they trace the problem to a river of pink slime that’s flowing deep under the city streets along an abandoned train line. After grabbing a sample of the ooze they discover that the slime can react to both negative & positive vibes. In other words, if you verbally abuse a cup of the stuff it gets hot & boils over in response, but if you sing a happy tune to it…it “Dances” happily. Meanwhile Vigo & Janosz have captured little Oscar & have him on a table ready to be taken over by Vigo’s evil spirit. They have covered the museum with a seemingly impenetrable glob of the pink ooze and there doesn’t seem to be any hope until the ghostbusters use the pink ooze to animate the Statue Of Liberty(!) and bring it over to the museum where lady liberty breaks thru the ceiling of the museum with her torch and the boys rappel down and defeat Vigo before he can take over Oscar’s body.

Of course I left out a lot of little details but if you’re a regular visitor of Horrornews.net then you’ve more than likely seen this film already. If you haven’t then I’m not going to spoil it for you. I will offer up a few bon mots about what I think of this movie though, first one being…it sucks! Yup, you read that right acolytes “Ghostbusters 2” is a piss poor sequel to the original film and I have to wonder why they couldn’t replicate the original films success especially if they had five whole years to get it right. The plot is sadly devoid of any real laughs and even fewer scares, the only character who managed to make me grin a bit was MacNicol’s Janosz Poha. MacNicol gives Janosz a deliriously funny accent and mannerisms that make every move Janosz makes funny. But besides MacNicol’s performance (& a scene where the guys are pretending to be Con Edison workmen as they drill a hole on a busy NY street) this film just isn’t funny.

Additionally it features one busted ass villain! Vigo hardly poses any major threat, at least not like Gozer The Gozerian did in the first film. That films climax felt apocalyptic and the climax of this film is just the opposite. Ultimately all that needs to be done is to blast creaky old Vigo with some of that very same pink goo that animates the Statue Of Liberty. The script seems to be written for children rather than for an adult audience as well, it’s not particularly exciting or scary, as if they didn’t want to frighten the young ones they expected their parents to bring along with them to see the movie.

In fact, I find that “Ghostbusters 2” pretty much ignores everything it’s predecessor succeeded at so well and is content to just exist, nothing more. A cursory look at the special effects proves that as they are cheap looking and seem rushed. The ambulatory Statue Of Liberty is especially dumb looking although there is one impressive shot of it walking across the Hudson River towards midtown Manhattan as our heroes serenade it with “Higher & Higher” by Jackie Wilson to make the pink slime “Happy”, a silly plot contrivance. Especially silly are the exhortations the Ghostbusters yell at the strangely unafraid people on the street as the statue lumbers across town. No one seems to be the least bit perturbed at the sight of lady liberty ambling through the streets of Manhattan & nothing gets squished either save for one squad car that happens to be the only car in the street, parked or moving.

Even the new theme song is lacking energy. As performed by rap elders Run-DMC “Ghostbusters” (Written by Ray Parker Jr.) sounds especially lame and rote. A much better theme (“On Our Own”) was performed by Bobby Brown, who also has a cameo in the film as a starstruck doorman. The performances seem to be mailed in as well with Murray seemingly doing as little as possible to make Venkman as likable as he was in the first film. All other performances (Save for MacNicol’s) are phoned in. And the dumb subplot featuring the return of Rick Moranis as Louis Tully is childish and mundane, featuring the character wooing secretary Janine Melnitz (Annie Potts) and donning a Ghostbuster suit and proton pack to help rescue the others who are in the museum wiping up the floor with Vigo. He isn’t funny this time around…just stupid.

I didn’t like “Ghostbusters 2” much at all. It is such a letdown considering how amazingly well done the first film was and I believe that Aykroyd & Ramis eventually just bowed to pressure as more money was thrown at them to hurry up and write a script. It’s so obvious that none of the players in front or behind the camera didn’t put their collective hearts into this. They just banged out a movie as quick as they could and cashed their checks before this turkey was unleashed to an extremely anxious audience. 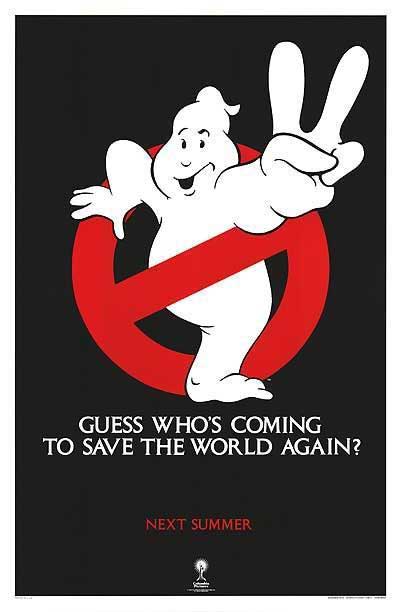 When it originally opened “Ghostbusters 2” had the biggest 3 day weekend gross in film history but that record was broken the following week by Tim Burton’s “Batman” & although it underperformed both domestically & internationally at the box office, it was still a success. But there has been no “Ghostbusters 3” as of yet despite the promises made by Aykroyd that a script was in the works. There was a “Ghostbusters” videogame released awhile back that Aykroyd endorsed as being “essentially Ghostbusters 3” but the game failed to ignite it’s intended audience and sank without a trace. As of today there is still no idea if a third entry to the series will ever be produced but our guys are a good sight older now and I certainly can’t imagine anyone else in their roles…can you? I say leave the series be! Leave us with happy memories of the first film and thank us for forgetting all about this one. It’s a sad, poorly written, ugly looking & especially unfunny sequel that shouldn’t have been made in the first place.