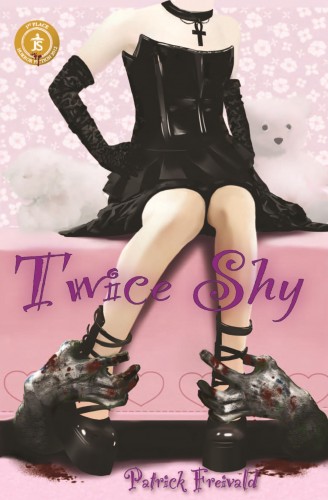 In Ohneka Falls, Ani Romero is a teenage zombie, a carrier of the Z virus struggling to cope with a forbidden secret and survive within human civilization.

Twice Shy is an expose of teen angst, cliques and struggles against alienation and isolation. Our tale is endearing and alluring unto an audience that has ever experienced peer pressure, rejection, bullying and balancing a healthy self-esteem. Ani is a very likeable, underdog character. I like the author’s use of the surname Romero, an homage of sorts for zombie pioneer in fiction, one George Romero. It’s a fresh spin on a borderline saturated genre resurrected often with countless renditions, variations and situations.

The teenaged angle is interesting, intriguing, likely catering towards a young adult audience. In this circumstance there are some very real, sociological concerns with the content. Rest assured the horror genre will definitely be under the microscope and scrutiny in terms of moral controversy and influence among impressionable minds. The trek of utilizing indulgent degrees of alcohol use, teen rebellion, illegal, street drug use and self-mutilation so casually is a dangerous one presented so unapologetically. I won’t venture so boldly as to state young minds are incapable of thinking independently yet there are potential concerns that these references condone and facilitate self-destructive behaviour among teens.

I like the fact Freivald has drafted our lead protagonist Ani with a sense of almost more human than human morals as she witnesses her Emo peers spiral into depravity of self-destruction. It’s a wise balance in depicting a very realistic society and interaction. As we peel back the layers in getting to know what makes Ani tick, we soon realize she has much more than the average teen to cope with fitting in, in a cruel, cold environment. She often questions the merit of her self-destructive friends yet accepts them for who they are and even encourages them to step outside of their stereotypical mannerisms and behavior.

A great deal of inner monologue moves the story along at a fluent pace. Ani’s human emotion makes us invest in her character as the reader strives to unveil what happens next. There’s little room for argument that Twice Shy is a page turner as your hunger for more with intensify with each passing paragraph.

Her surrogate mother Sarah presents some fascinating conflict shifting. Initially we like her nurturing stance within the plot only to realize she too has a very tortured past with questionable actions. The riff between mother and daughter creates an unforeseen detour that lures the reader even deeper into the psychology of the tale.

Grisly and gritty descriptions of Ani’s struggle with hunger for human flesh and her decaying anatomical descriptions makes this a most skin crawling and delightfully horrific tale.

There’s a fine combination of humor, drama, action, suspense with even a slice of romance. Not every author can sew these genres together so seamlessly. It’s no wonder Freivald’s efforts were awarded first place in the publisher’s annual submission contest. I for-see a bright future for this author among the darkest of shadows.The climax will creeps completely out of nowhere and is clearly worth the price of admission alone.