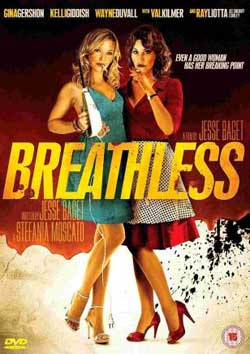 Lorna & her best friend Tiny suspect that Lorna’s ex con husband Dale was responsible for a robbery and demand to know where he’s hidden the $100,000 bounty. Unfortunately for all of them, sheriff Emmitt Cooley has the same notion and he’s waiting just outside of their trailer home for a search warrant to enter the premises and investigate for himself.

“Breathless“? What the hell is this? Did my evil editor finally snap and demand I review Jean Luc Godard’s classic french new wave flick? Although I’m not a fan of it I’m pretty sure it’s not a horror film or anything close to one. But much to my relief it’s nothing close to that, it’s a film reminiscent of “Fargo” & “Raising Arizona” more than anything else and while it’s no classic it certainly didn’t ruin my day after it was over. 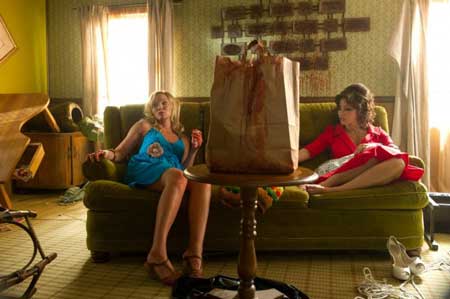 Written (W/Stefania Moscsato) & directed by Jesse Baget, “Breathless” is the story of unhappily married couple Lorna & Dale. Dale (Val Kilmer) is a ex-convict who is trying to make a go of a normal, law abiding life with his wife Lorna (Gina Gershon). The couple live in the middle of a desert somewhere in Texas and it seems like Dale’s attempt at making an honest living (By selling furniture) isn’t panning out as well as he had hoped. Lorna gets wind of a armed robbery that netted the thief $100,000 and just knows that Dale is the culprit so she conks him on the head with a frying pan after grilling him as to where he’s hidden the money which knocks him out cold. She then asks her best friend Tiny (Kelli Giddish) to come over and help beat the truth out of poor Dale.

Unfortunately because of Dale’s history sheriff Cooley (Ray Liotta) stops by to ask him some questions. Lorna won’t let him in of course because she believes that Dale (despite his denial) has indeed committed the crime and wants the money for herself. Knowing that the sheriff cannot enter without a search warrant she simply tells him that Dale has gone out for a walk. Cooley radios for a warrant to be delivered to him as he waits in his squad car just outside of the trailer, where he can watch and see if anyone enters or leaves. Turning a bad situation into a REALLY BAD situation, Lorna accidentally blows Dale’s head off and sprays blood, brains & bits of bone all over the inside of the trailer. Together Lorna & Tiny have to find a way to clean up the mess, dispose of what’s left of Dale’s body & find the hidden money before the search warrant arrives and sheriff Cooley can enter. But did Dale actually commit the crime & who is that private investigator that’s also keeping an eye on that trailer? 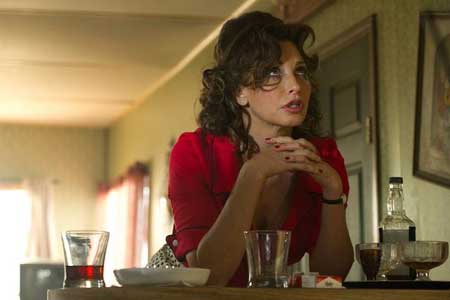 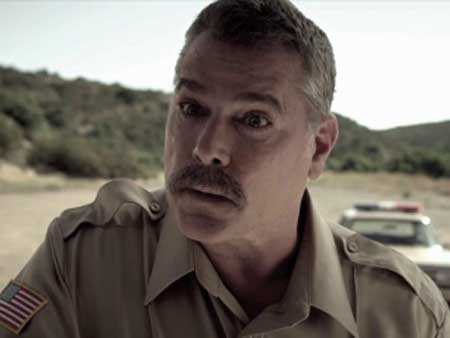 It’s plain to see that this is a very derivative plot and if you’ve ever seen “Raising Arizona”, “Fargo” or “Pulp Fiction” then you’ll immediately get the idea here but does it work? Let’s just start by saying that Baget is no Tarantino or either of the Coen brothers although he obviously worships at their respective thrones. “Breathless” is a black comedy/crime drama pastiche that tries a little too hard to keep it’s audience guessing & on it’s toes. Don’t misunderstand me…Baget could’ve picked far worse films to mimic for sure and he tries to make this film as entertaining as possible but by adding so many layers to his script while keeping the everyone in the trailer he ruins the opportunity to open up possible scenarios that might have enlivened the movie a bit.

He has a pretty good cast to work with though, Gina Gershon is deadpan perfect as Lorna. Her attempt at a Texas drawl is lacking but she is mesmerizing to look at and she makes Lorna somewhat lovable despite her predilection for violence. Val Kilmer’s Dale isn’t much more than a cameo but he’s lots of fun while he’s onscreen, he makes the most out of his sparse screen time. Ray Liotta’s Texas drawl is awful but aside from that he his top notch as well. There’s an anger in his eyes that he can’t subdue and in my opinion that hurts the believability of some of his roles in the past but it works here. The best acting in the film comes from Kelli Giddish as Tiny. When she arrives at the trailer the film just feels brighter despite the setting. She brings a lovable dizziness to the role and she manages to not only keep up with Gershon (Who’s having a field day with Lorna) but eventually she outshines her and the rest of the cast, she really makes the movie entertaining. Wayne Duvall plays P.I. Maurice Doucette as if he’s channeling M. Emmett Walsh’ character in “Blood Simple”. He apes him so perfectly that it felt like more of an impersonation than actual acting. 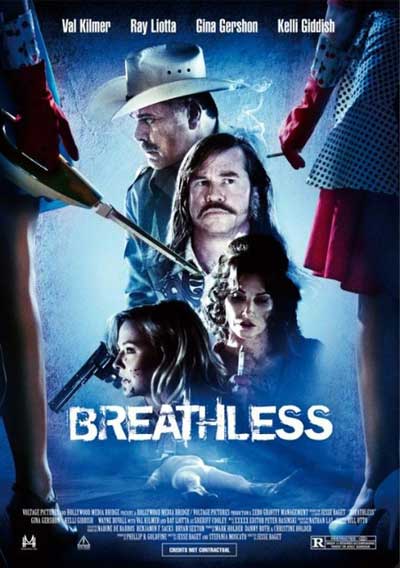 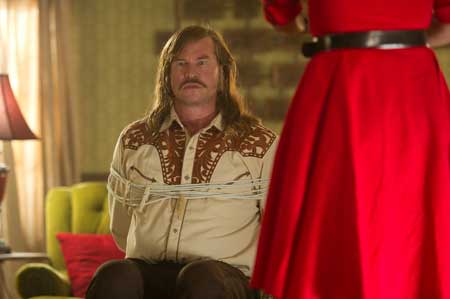 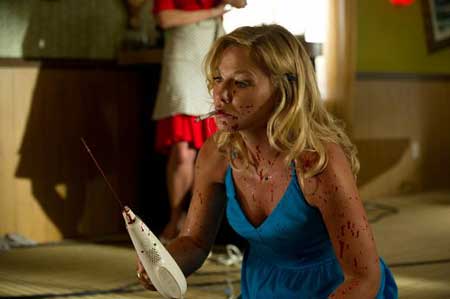 But the script is something of a chore to get through despite the fine acting on display. I understand tossing in a few twists & surprises in a script like this but there is literally a new twist every 10 minutes or so. In fact there are so many twists that eventually they begin to overlap each other and more than a few of them end up either not making sense or being too stupid to believe. The ending of the film raised the biggest “WTF”? from me as it pretty much decides that the first 15 minutes of the film were unnecessary and stupid. Keeping an audience guessing is one thing, confusing them to the point of disbelief is another thing altogether.

But “Breathless” (I don’t understand the title either) isn’t a terrible movie. It’s entertaining and has a fair share of laughs as well as some pretty nice scenes of bloodshed. It’s never going to win an Oscar but it does do what it sets out to do even if it takes a lot of left turns to do it. You can do a whole lot worse than this on a evening when there isn’t anything to watch. It’s a fun little movie that is worth a rental if you see it.