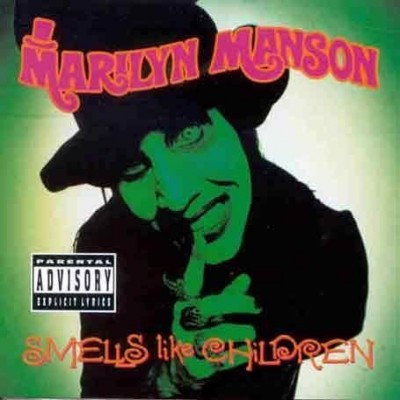 What can you say about this early Marilyn Manson release? It’s quite bizarre and angry. In the style of a mash-up of weird sound FX segments and garbled voce tracks, “Smells Like Children” uses the art of segueing from one piece of garbage gargle into the next with what sounds like a way to experiment with different off-beat ideas and recordings (I’m really tempted at this point to add the obvious “Smells like crap” comment…). Its base seems to be rooted in incorporating shock statements and vulgarities between songs that don’t do much besides making you want to turn you volume down to avoid embarrassment. It was later reported that the release was additionally edited down from its inception which featured recordings too extreme for public release.

This early Marilyn Manson effort is a great introudction to the infancy of the band (not to the level of appeal that later releases would ascend to). The element of industrial beats and mechanical thunder slams are used thru-out, usually over unintelligible singing and hard-to-hear lyrics.

The final act segue “May cause discoloration” contains a 4-minute recoding of a patient’s phone-in with a nurse, while other tracks contain associated cryptic messages that are more like inside jokes to the band than something the listening audience would be privy to.

“Diary of a Dope Fiend”
is another power track that pays a slight homage to the novel “Diary of a Drug Fiend” by cultist Aleister Crowley.

“Dance of The Dope Hats”
provides the release’s most powerful track featuring a nice mix of power chords and industrial romps. (I would later come to admire remixes of this very track)

“White Trash”
is an acoustic track by Tony F. Wiggins, a bus driver for the Danzig / Pantera tour included as an alternate version of the “Cake and Sodomy” track. It was reported to be include due to its white trash sensibility.

The essence of Marilyn Manson is very apparent which is recognized thru the singers altering vocal styles. What makes this release at many times unlistenable is that the production is poor using drum tracks that offer less bass and more noise keeping the listener from ever really getting the intended grooves. Much of “Smells Like Children” jumps between drug use rants, sound experimentations and anti-religous badgering.

The cover art features MM in his most creepy-smiling children-abductor pose burnishing the words “Smells like Children” (which is a line taken from the 1968 musical film Chitty Chitty Bang Bang.

The CD would appear on the scene in 1995 still too early for this inventive band to gain the kind of notoriety they would later achieve on future releases. The musical influence on the production is very evident with Trent Reznor of Nine Inch Nails helming the mix.

“Sweet Dreams (Are Made of This)”
became a hit for the band introducing the world to their wacky and macabre experience thru the introduction of their video by the same name. The track is a remake alteration of the popular song by the Eurythmics. MM is seem in the video with scars and self-abusive markings that had many of us scratching our heads at what abomination came floating to the surface. The CD found itself almost entirely carried by this one track.

Not too short after would begin the era of MM that would be embraced by Goths, metal fans, and those who just thought the band were bizarrely unique. Their music was greatly enhanced by reports of outrageous stage shows, props, on stage violence, and backstage exploits. This angry creation would in fact appeal to many and garner them national attention (primarily the band’s front man).

With few in the way of original new tunes, this release took on covering 3 remakes. The before mentioned Eurythmics track, a cover of Patti Smith’s “Rock N Roll Nigger” and Screamin’ Jay Hawkins’ “I Put a Spell on You” (which would also be included on the movie soundtrack Lost Highway“)

The release features 16 tracks which set an early foundation for more stylized tunes from MM down the road. I quickly grew to be a major fan of the band’s creative efforts…. though I can honestly say that this release wasn’t one of them.