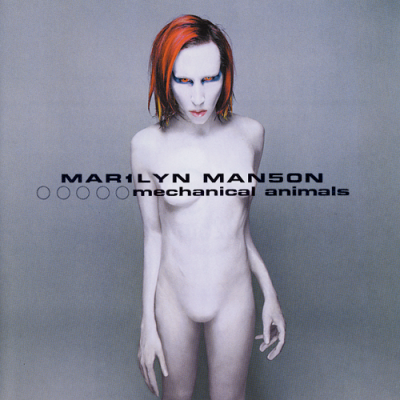 Taking an inspiration road turn, Marilyn Manson arrives with a new conceptual album in the form of “Mechanical Animals“. It’s cover features the lead singer MM showcased in an androgynous genital-less pose. In some respect it reminds me of David Bowie’s “The Man Who Fell to Earth (1976)”, though I believe that conceptually it was the early 70s album “Ziggy Stardust” that inspired this release.

While clearly a tribute to his influences, “Mechanical Animals” still manages to wear its own skin with the industrial overtones and power chord rock mixed with studio savviness. What one will notice right off the bat is leader singer Marilyn Manson’s style of always doubling up his voice 2, 3x or more depending on the dynamics of the song. Absent this round is the gothic sound that previous release seem centered on. With full intention on creating a 70’s glam aura, we actually never really “entirely” to get to the intended place. Rock ballads, rants and moaned sung lyrics emerge in a fuller more-produced fashion than some of his heavier releases.

Lyrically it’s evident that with songs like “The Dope Show” that Mechanical Animals” is tackling a more drug-infused lyrical content.

“Rock is Dead”
stampedes forward with Bowie-esque verses escalating into an angry rant of a deviant pied-piper marching asking by product alone to raise your fists and chant along. As MM pauses…to tell us that “God is in the TV” before pushing forward with his take on fads and suffered genres.

What is probably most noticeable this time around is Marilyn Manson’s need to make every other tune a yearning call sometimes ending on a more spoken note than a punk ramble. Funny voices, dynamic vocal changes presents like a “Sybil caught in Hell” trying to make a plea for freedom. “Post human for example jumps from one vocal tone into the next celebrating its own wickedness. Again God is referred to but in this time he is called a “number”.

In the song “I Don’t Like the Drugs” one of the album’s stand out tracks, MM confesses how the drugs follow him around in a haunting way. The song almost demands an audience chant with its catchy lyrics and pumping drum beat. This round is elevated with the addition of soulful-backed-chorus-singers who all unite with that 1 single repeating message.

“New Model No. 15”
presents another hybrid of techno sounds and Kiss-like power chords again reaching a shouted chorus that almost says in less words, stand up and shout it!

“User Friendly”
pulls no punches with its use of explicit dradled lyrics proclaiming how disposable some of MM’s past love interests have only served a single purpose. This round we get plenty of computer altered voice interludes adding more mechanical to his “animals”. “I’m not in love, but I’m gonna F*ck you” keeps its message pretty clear.

The albums last track “Coma White” draws it’s journey to a close with its hypnotic melodic guitar lines escalating into a triumphant proclamation of drug use and its effect on users. This particular track provides one of the popular video releases featuring his girlfriend at the moment “Rose Mcgowan”.