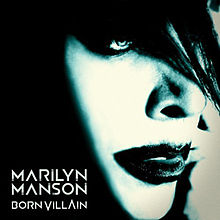 It appears the angry, in your face gothic hard rock master has returned. Yes, none other than our dearly beloved Marilyn Manson. I say that because his last couple of releases were easily forgettable and void of the kind of material that drew me to his music in the first place. The new album is called “Born Villain” and it’s been long overdue.

“Born Villain” takes the odd road with some of the inventive sounds we’ve come to know thru the Manson music. Of course there is the driving industrial-edge keeping it all together that keeps the beat moving. “Born Villain” in that a respect is a tribute to Manson by Manson himself taking us back to some of his earlier sounds.

The release has been described by Manson as “suicide death metal”. Though not being a fan of death metal, I can say that this release delivers a much better sound than the undistinguishable sounds death metal bands tend to throw upon us. So for the sake of keeping the release “out” of that arena….I say let’s not lump it into “that” category.

Can I recommend my favorite tracks yet? Not exactly, as a whole it’s a great overall production. At times “Born Villain” seems to weave in and out of all of their earlier albums. I did hear a bit of the “Type O Negative” influence in there and maybe even a tip of the hat to “Pantera”. While it was clear in the past which tracks we designated “the singles” of the release…I believe this release will serve a different purpose as a more “complete” experience..incorporating many pieces into more cohesive whole.

The first single “No Reflection” is definitely a powerful track for the release but is not isolated as each of the tracks seem to offer a bit of the crunch rock bang that Manson is known for. Probably a little bit held back this release was the over-industrialism direction that “The Golden Age of Grotesque” took. I can’t exactly call that a bad or good thing as I really enjoyed “The Golden Age of Grotesque”, though “Born Villain” clearly has a tip of the hat to a Alice Cooper direction this round and his hard rock roots

You might also notice the inclusion of “You’re so Vain”, the Carly Simon song. Very cool indeed and a great choice for a remake. Manson is course also known for his haunting remake of “Sweet Dreams”.

Each release by the group seems to carry over a little bit of history from band members joining, leaving, returning, and keeping us generally confused. There is a pretty good wikipedia timeline to reference this but in essence we see the return of Twiggy Ramirez this round (and the exit of Tim Skold) Both are great components to some of Manson’s best work, though its nice to see Ramirez back on board like the old days.

“Born Villain” features 15 rock-centered tracks that simply ignite the memory of Marilyn Manson back into the frontline. Good to see you in 2012….we’ve been bored and need our MM fix.