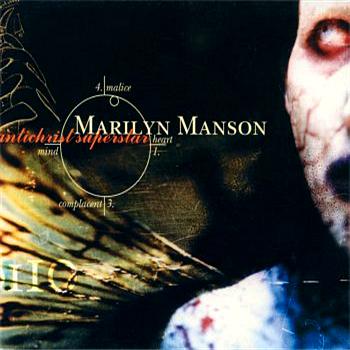 The world was taken by a storm of raw energy and trendy sounds that can only be defined as Marilyn Manson. “AntiChrist Superstar” was more than just a game changer, it was a formal introduction into the man, his music, and his band’s dark aura of energy rock. This record-breaking album was soon playing on the players of every Goth, rock fan and industrial nut across the board proclaiming MM as the anti-hero for a new age. In short, it became cool to be dark and gothic

Though let’s make no mistake here, the song “The Beautiful People” was a raging dark classic the second those ominous drums started pounding. Giving the rock world a few edgy hits and a mix of songs that combined all sort for influences, MM was on his way to superstardom.

AntiChrist Superstar begins with the track “Irresponsible Hate Anthem” which (metaphorically) screams to its listeners “your in for a new treat, now take your glass of hate and eat it”. Though for the record MM tells us that “he wasn’t born with enough middle fingers”…nice eh?

“The Beautiful People” was the second track on the release that would go on to become the leading song that defined what the MM group was. It’s brilliant whispered edgy lyrics was overdubbed with a multi voice approach that while powerful, was also…well, kind of creepy (Creepy though was about to become really hip).

“Tourniquet” another track on the releases was to be one of 2 popular videos for its time that were brilliantly created by visionary Floria Sigismondi. While not receiving the same commercial appeal as “The Beautiful People” it’s video would overpower the play lists making it a hard visual-creation not to turn away from. The video would combine dark imagery with inserts, isolation, a mannequin figure sporting a coat of distressed chipped paint, sped up motion lips, blurring and even MM clipping his fingernails (to feed it to the mannequin….hmm). Other highlights include mouth tubing, a spinning horse and MM being suspended by wires in an aluminum looking space suit made of garbage (now there’s vision)

“Angel With The Scabbed Wings” is a powerful track that ended up being my favorite from this release. It contains much of the power of “The Beautiful People” while cranking thing sup a notch with one angry-ass Manson delivering his lines. Quite an energy filled track that sounds best when turned up to 10.

From here on in, we get a healthy offering of hard rock, industrial noises and the trademark MM overdubbing making the project a rather “complete” experience from front to back.

The final track “Man That You Fear” takes on a more darker depressive tone with its cold to the point lyrics such as “I was born into this, everything turns to sh*t” and “ants are in the sugar”

The theme of the CD was broken up into 3 acts. The first being: Cycle I: The Heirophant, then “Cycle II: Inauguration of the Worm” and “Cycle III: Disintegrator Rising”. Though I don’t think that idea really stuck out in the scheme of things.

Finally we come to the ultimate realization statement in its staticky ending “when all of your wishes are granted, many of your dreams will be destroyed“, that says something about the idea “watch what you wish for”. A nice ending to this dark road

Let’s not forget the great CD design on this one illustrated and presented by one P.R. Brown. The release came at a perfect time when digital, photography and dark artistry was gaining ground as the status quo in CD presentation. This particular release with its very eerie photographic elements and unique design served as a perfect poster boy for what was to come. Soon MM and thousands others would take this imitated but appropriate approach to the art of CD designing.

In summary, it’s a perfect album for its genre. A mainstay for Marilyn Manson and a iconic release that will forever stare us back with MM’s zombie-like cover. Celebrate Evil?? Not quite – but this release sure fit the rebellious teen profile (positioned to even disturb a few adults).