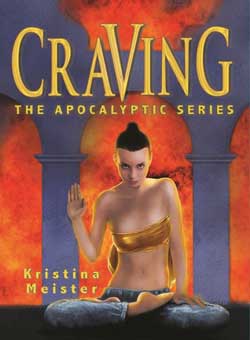 Lily Pierce boards a plane across the country to settle the affairs of her estranged, deceased sister Eva. Strange circumstances begin to unfold while talking with investigating officer Unger. Ever the cynic, Lily soon learns foul play was involved with respect to her sister’s alleged suicide. Moreover the very threads of her sanity are frayed as she realizes Eva’s death did not take place until she was already en route to her residing city. Realizing she has a knack for the clairvoyance, she probes deeper into the unexplained, searching for answers to her sister’s mysterious death.

Craving is defiantly cut from a different cloth and would be difficult to slide neatly into any one given category or genre. Although written in first person persona and contemporary prose, the content isn’t easily digested. There’s a lot of deep thinking on the philosophical end. So if you’re well versed in dharma, Zen or Buddhism this will be right up your alley. Otherwise to the rest of us unenlightened, atheist bumpkins there are tremendous amounts of information to absorb. This isn’t necessarily a bad thing but don’t expect to breeze through Craving in an afternoon or two like your typical Dean Koontz novel.

I particularly like how the author Meister incorporates evil and lust for blood into the equation. As in any circles there are entities that go on their own wayward path. As Lily explores further and further into the bizarre macabre of Eva’s last living days to circumstances that unfold reveals even further evil.

While attempting to decipher her journals she meets Arthur a coffee house and bindery press owner who introduces Lily to a completely new approach to life and thinking. Learning to harness her prophetic visions she discovers Arthur and his friends too have unusual powers that may be a key element into understanding exactly what had happened to Eva.

The characters are well thought out and tangible enough to the average reader. At least there is a fair amount of situation comedy that significantly lightens the tone from all of the deep philosophical ponderings. Jinx a boyhood immortal is introduced who happens to be a mathematician. The tension between the adolescent prodigy and Lily is endearing, captivating and will encourage the reader to press on.

Perhaps most notable is the actual narrative voice in itself. Once again, told from the first person persona from Lily’s point of view, the author illustrates a vivid picture unto her audience that will at numerous times compel you enough to completely forget from what perspective Craving is being told. This gift of enchantment is one even the most seasoned of authors strive for throughout their entire careers and may never entirely fulfill. Kristina Meister executes the narrative tone of Craving so effectively she seems to have achieved just that in one, solitary endeavor.

The imagery is vivid, descriptive and often surreal rendering this an engaging fantasy related tale. Craving may not necessarily be for everyone but a sound recommendation for those interested in expanding their fictional horizons, dabble in some Zen philosophy or perhaps just enjoy some Pink Floyd, incense, medicinals and an interesting read on a Sunday afternoon.