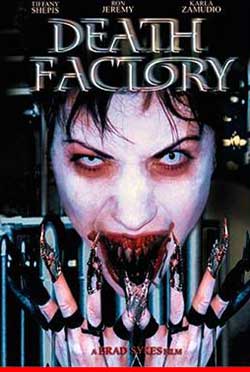 A woman working at a biological research facility becomes ill when she contracts a deadly, new virus. Sometime after, she becomes a half-monster beast and kills her old co-workers. Some time later, a group of teens go into the old research facility to have a party and come face-to-face with creature

The old Dyson building on Duncan Road is an abandoned warehouse that was used to conduct chemical-related biological experimentation. The local kids know it well for thrill-seeking. It’s “the” prime spot for partygoers who want to have some alone time in an abandoned building. The set up is pretty standard for this kind of film. We got a group of 6 who set out to spend the weekend at the Dyson Plant with a few 6-packs and the desire to “get lucky”. 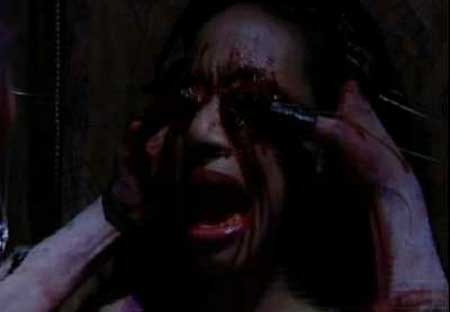 The group consists of Rachel (Lisa Jay), Louisa (Karla Zamudio), Derek (Jeff Ryan), Leticia (Rhoda Jordan), Francis (David Kalamus) and Troy (Jason Flowers). The setting begins with 2 unlucky visitors who are attacked by a ravenous blood sucking evil-eyed savage (yep, all that and more!). We “assume” she is somehow a past experiment gone wrong that has resided in the old local for quite a few years (a leftover throwaway, so to speak).

“Death Factory“, the movie, is a 2002 release, directed by Brad Sykes featuring the vicarious Tiffany Shepis in the role of Alexa. Viewers shouldn’t have too hard of a time pointing her out as she is the one with the makeshift knife-wielding fingertips and the shiny row of metal teeth. It’s also one of Shepis’s earlier appearances. You might even say the film had some influence on the “Wolverine” world of cinema, however I know full well that the comic was in print long before this film came around. Our resident monster in this film sports a nice array of poor man’s costuming complete with trash bag leg warmers and old found parts sticking out of her hands. You might even say she would make a great sister to rocker Blackie Lawless. 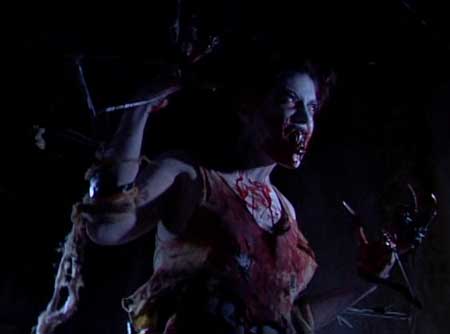 “Death Factory” is a pretty simple film at best. The Director Brad Sykes established a location point and let the chaos ensue as the occupants slowly get killed off one after the other. Killing is usually brutal, bloody, and ends with our resident savage feeding into her victims necks. We are told later that “Alexa” survives by feeding off blood, but as a focal character it’s never really established if she is monster, vampire, zombie, or other. We make the assumption that science had “something” to do with it and leave it at. Actor Ron Jeremy makes a cameo as Glen the vagrant, and for the segment actually works it quite well.

I’d say this in an OK product for a micro budget which fits into the category of better products that earlier Brain Damage Films had released. 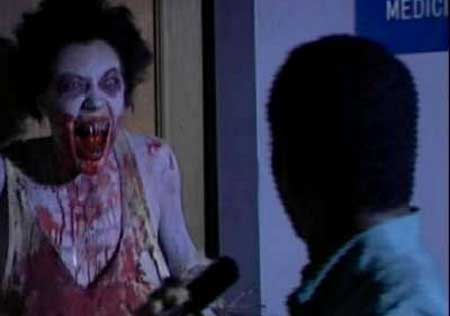 The set used was announced as being an “old building around for ages”, but actually appeared quite new with fresh wood in place. I thought about this visual story hole and thought it might have worked better to announce it as an old building that was renovated and “then” abandoned. But that’s just me.

Looking at some of the castle looking walls I’m assuming the location was the shell of a “Haunt” used during October Halloween season. It’s also worth noting that the film is estimated at a $5,000,000 budget which is just plainly absurd (I’m guessing about $10K at best) 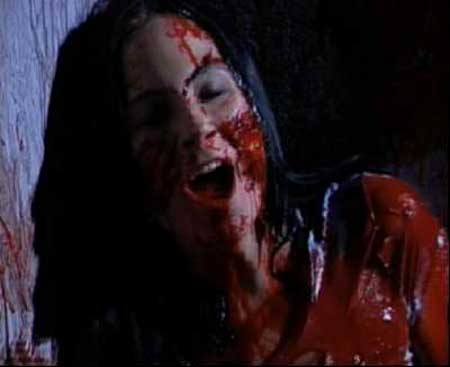 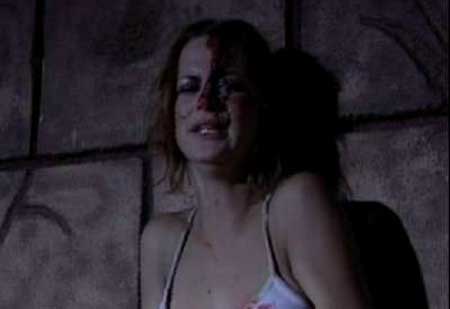 The cast never really ascends to level worth talking about (with some bad acting moments interlaced). Comedic? no, but I did notice that the token black guy was given alot of cliche lines. I wondered if they were intentionally cheesy or just cheesy period. (aka “count me in!…I’ll be right back!…etc) 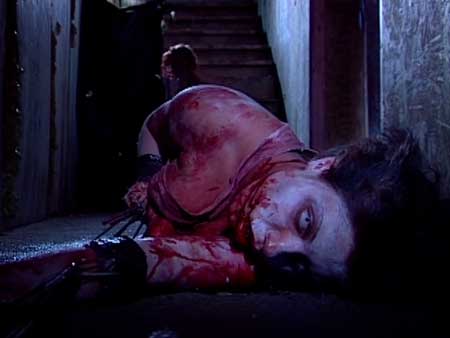 “Death Factory” takes a lead from the Freddy Krueger camp by placing a razor-fingered savage against a team of unknowing victims. The film franchised a sequel (The Death Factory Bloodletting) but probably didn’t need one. In any case, you still have to give props to actress Tiffany Shepis for doing the best she can with a non-speaking role. “Death Factory” is by far….. not great, but still an iconic release for the Brain Damage Films poster wall.