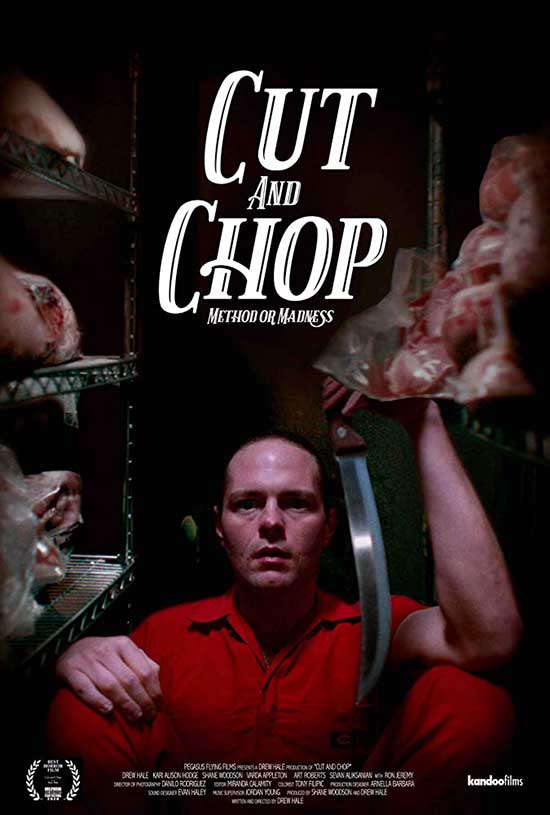 A troubled method actor gets carried away with his work on a role, playing a butcher.

Method acting in cinema has produced some wildly varied results over the decades; for every Brando or De Niro delivering a mesmerising powerhouse of a performance that lights up the screen, there’s a dozen Jared Letos or Shia LaBeoufs stinking up the joint with sordid tales of packages of used condoms sent to co-stars or teeth being pulled out on set. Over recent years it’s probably fair to say that the process has skewed more towards the latter side of things, perhaps becoming associated with the kind of actors who are more skilled in exploiting social media for exposure than the more classical kind. 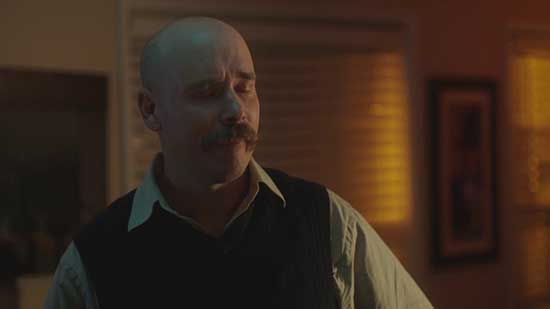 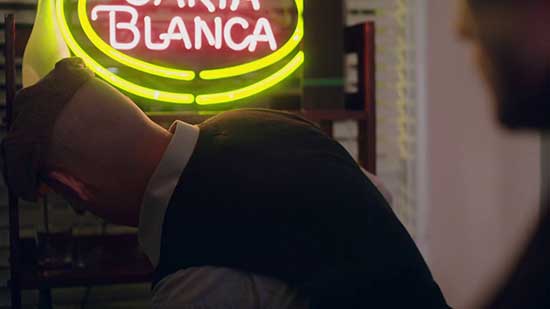 The 2019 movie Cut And Chop centres around Tom; played by Drew Hale (who also writes and directs), Tom is a particularly odd and maladjusted man who finds himself on the cusp of breaking into acting with a role in a low-budget horror film. He’s also a method actor of the most extreme kind – perhaps a little too extreme. We meet Tom and his long-suffering girlfriend Esmerelda (Kari Alison Hodge) in an interesting pre-credits sequence; a sex scene between the pair, intercut with slow motion footage of pigs trotters being sliced up and fish being gutted, becomes increasingly sadistic – up to the point Tom decides to bite a sizeable chunk of flesh out of Esmerelda’s side.

A trip to the grocery store gives us further insight into Tom’s apparently troubled state of mind; he’s incredibly socially awkward, clearly uncomfortable in conversation with strangers and the few people that are close to him. And his interest in the raw meat being handled by the store’s hirsute butcher seems to border on the unhealthy, as does his fetish for knives and habit of carrying holdalls full of raw steaks. A follow up visit to the liquor store (the clerk being played by of all people Ron Jeremy, demonstrating here that his talents lie in – erm, other areas – than conventional acting) sees Tom indulge his other habit of casual thievery too. 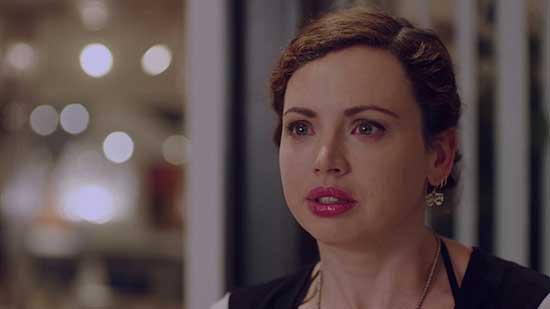 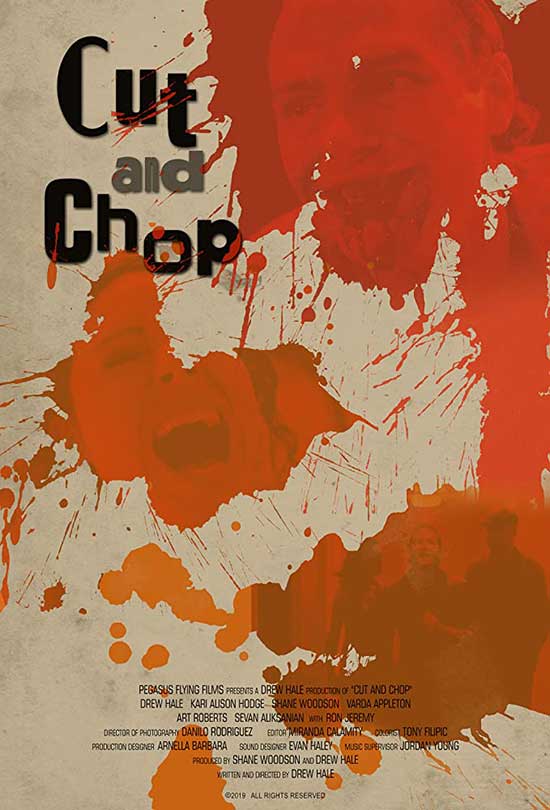 Esmerelda’s friend and co-worker Gladys (Varda Appleton) shares her passion for habitual weed smoking, and they both have a mutual lack of success with boyfriends; Gladys’ partner Burt (Shane Woodson) is a fellow stoner and slightly pretentious would-be screenwriter. A double date between the couples goes about as well as could be expected, as Esmerelda struggles to conceal her discomfort with Tom’s increasingly erratic and weird behaviour in front of her friends. It’s when Tom lands his debut film role in the eponymous horror movie Cut And Chop (very meta) though that things start to spiral rapidly out of control for all four of them – beginning with Esmerelda’s mysterious disappearance.

For at least the first two thirds of its 90 minute run time, Cut and Chop is more of a character study than a horror movie; and rather a good one at that. Drew Hale shows a steady hand in his first directorial role, eschewing tacky horror cliches and employing concise, steady camera work that grounds the locations and the characters in reality – which adds to the effect when events become increasingly unhinged. As well as the aforementioned intro sequence, there are another couple of amazing stand out scenes – a hilarious dream sequence during which Tom gives the movie audition he’d like to perform in reality, and a brilliantly committed scene which sees a gore-spattered Tom, naked except for an apron, butcher an unseen piece of meat with a machete while singing opera at the top of his lungs. As with the rest of the movie, these scenes manage to be both very funny and inherently unsettling at the same time. 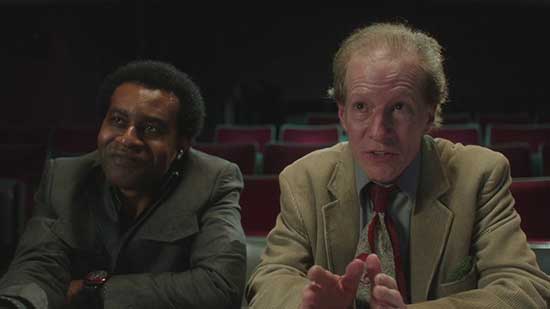 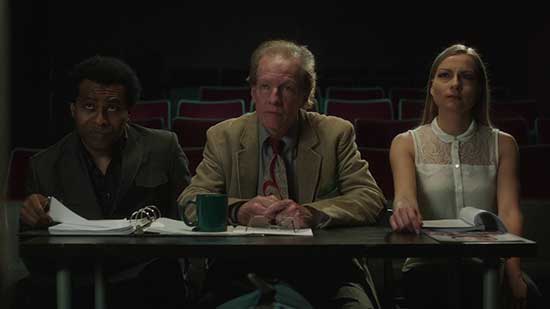 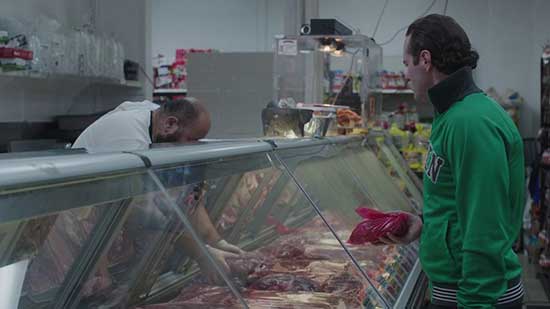 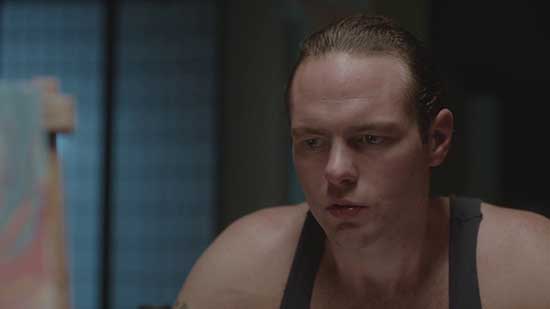 The horror arrives during the final act; while we don’t explicitly the actions that result in Tom having rather more dismembered limbs and torsos in his apartment than is strictly usual, the matter-of-fact manner in which we catch glimpses of the body parts themselves is chilling. And the practical gore effects used in these scenes is top notch stuff.

Hale’s central performance is really rather brilliant; he manages to effortlessly portray Tom as a disaffected oddball, initially struggling with his social awkwardness, but becoming more at ease and animated as he draws confidence from his increasingly deranged actions. The rest of the cast don’t quite reach the same highs, all coming off a little stilted at times. As a whole though, Cut And Chop is a brilliantly low-key little horror that manages to balance the fine line of being both amusing and chilling at the same time; kudos to Hale for this, and let’s hope whatever he follows up with builds on this fine start.