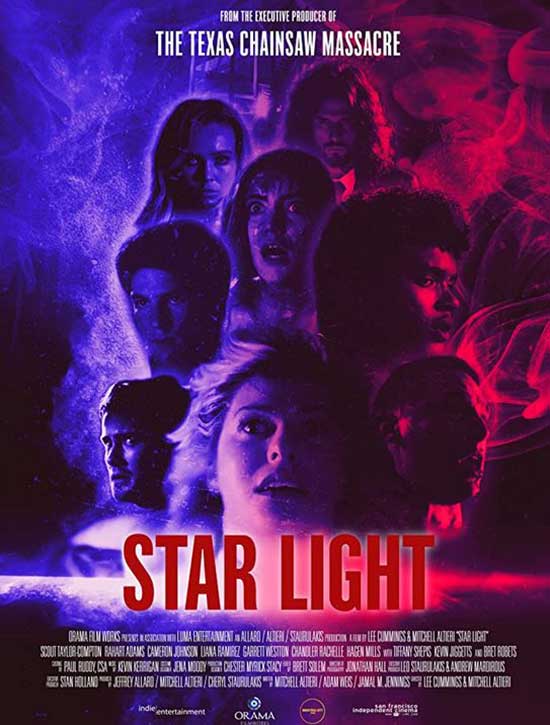 A teen’s life is turned upside down when he helps a world-famous pop star on the run to escape her violent pursuers.

Many of us fantasise about that hot celebrity we’ve always had a crush on, accidentally stumbling into our lives; but if it were to actually happen in reality, would it turn out to be the rip-roaring smut fest of our dreams or something more mundane? Or even dangerous? That’s a conundrum which suburban teenager Dylan will soon discover the answer to in 2020 movie Star Light. Dylan (Cameron Johnson) spends his days between high school, bickering with his single parent mother and her occasional boyfriends, and listening to the music of his pop singer fantasy Bebe A. Love (Scout Taylor-Compton). Dylan is something of a disillusioned and frustrated character, at his young age already fed up with ex-girlfriends, his mom, his fickle friends and small town life in general.

Life changes quickly for Dylan though when, one night after a house party, he meets a strange guy at a gas station. While he’s only interested in playing a video game, a suited, ponytailed stranger takes an odd interest in Dylan, attempting to engage him in an oddball conversation. Things get stranger still outside when, skateboarding home in the streets, he’s knocked flying by another stranger, a young girl this time who appears to have fled a car accident. While she’s out for the count, Dylan is afflicted by that perennial curse of the teen horror movie, a flat cell phone battery; so he manfully picks her up and carries her back to his friends’ house.

Meanwhile the ponytailed dude (Anton, played by Bret Roberts) at the gas station has taken an unhealthy interest in Dylan’s whereabouts, threatening the clerk in a somewhat sub-De Niro manner; are we safe to assume he and the girl are connected somehow….? Back at the house the girl is soon conscious and talking, but is in a state of panic; she’s injured and potentially in trouble with the law – and she bears an uncanny resemblance to Bebe A. Love. The cops are soon on her trail after finding her wrecked car, but run afoul of Anton; it transpires that he is her “handler”, and is on the hunt for her as well. And he happens to have something weird in the trunk of his car that he has one-sided conversations with.

If you’ve seen any movies ever, by this point you’ll be aware that the runaway girl is of course Dylan’s pop star crush in the flesh. Star Light clocks in at just shy of ninety minutes, and by the thirty minute mark it’s clear we’re heading for pretty standard teen horror fare, with a dash of home invasion/siege thriller thrown in. There are some other supernatural elements that aren’t really fully explored – both Anton and Bebe appear to have some kind of psychic/telekinetic powers, and characters become “possessed” of a sort, bleeding from the ears before going on psychotic rampages – but mostly Star Light offers fairly generic and bloodless thrills in time-honoured teen slasher fashion.

But it’s slickly directed by Lee Cummings and Mitchell Altieri, if in a slightly generic fashion. The acting performances range from the mediocre (most of Dylan’s party buddies) to the enjoyably camp and over the top (Roberts as Anton), but the standout is Cameron Johnson. He’s very natural on screen and brings a likeability to Dylan that elevates the whole movie to a point that’s better than the script deserves, and seems a natural fit for the horror genre; it would be good to see him appearing in a higher quality movie than this in the future. And for my money he comfortably outshines experienced horror actor Taylor-Compton, who seems to be phoning it in a little here.

However Star Light is still pretty watchable, with enough plot twists thrown in throughout the short running time to prevent the viewer ever getting bored; it’s a shame the makers didn’t care to go for a higher rating and allow a little more blood and gore, but it’s better than the average teen horror; don’t go in expecting anything too nasty and odds are you’ll have some fun with it.