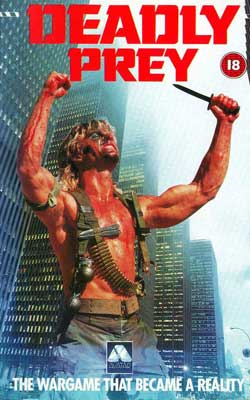 A group of sadistic mercenaries kidnap people off the streets and set them loose on the grounds of their secret camp, so the “students” at the camp can learn how to track down and kill their prey.

Deadly Prey is the epitome of ‘80s action flicks. From the mullets to the techno drum beats to the insane action sequences, Deadly Prey is a little known film from director David Prior that hasn’t aged well since its release. Still, the movie makes good use of its features for humor now; what once was taken seriously in 1987 (the aggressive manshake of teamwork, heroes who only growl) is now easy fodder for jokes and laughter. And Deadly Prey isn’t all bad, even if it is quite goofy; it’s actually got some good fighting scenes. 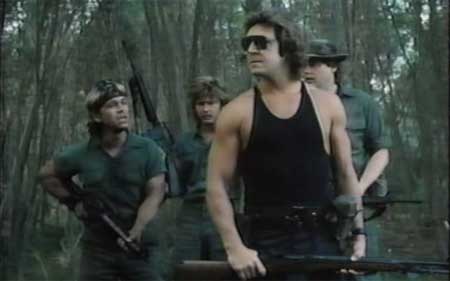 The biggest flaw in Deadly Prey is that it really doesn’t have a plot. There’s a group of mercenaries who steal people off the street, set them on the loose through the jungle, and then kill them; apparently, they’re not exactly army, but they do have a lot of soldiers who join just for the fun of the sport and the money they get paid. The main general is a bad dude named Hogan (which is kind of funny just because it reminds of Hogan’s Heroes) who is drunk on power and loves to laugh with little chuffing noises. Deadly Prey tries to make this group of killer mercs appear more detailed than it really is; there’s a slight government cover-up going on funding the group, but ultimately the mercs’ background isn’t really explained, nor does it matter at all for the plot to continue.

Our “hero”, Danton (Ted Prior), gets drawn into this mess after he’s kidnapped off of the streets in just his boxers – perhaps his attackers were drawn to his glistening muscles and ripped abs, because that’s pretty much the entire scenery in Deadly Prey. Danton wasn’t a good pick, and he’s been studying to be Rambo at home or something, because he escapes and starts ripping through soldiers one by one, studiously setting up camp in the jungle and setting elaborate traps from sticks and leaves. 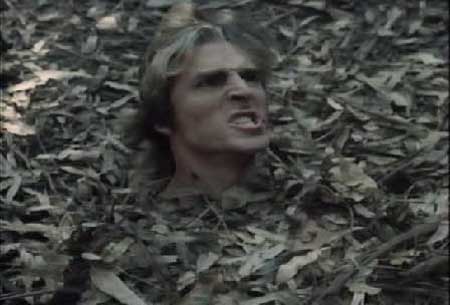 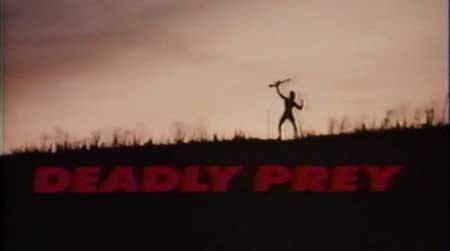 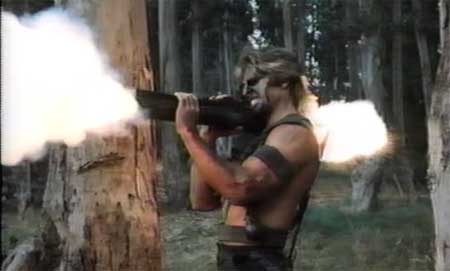 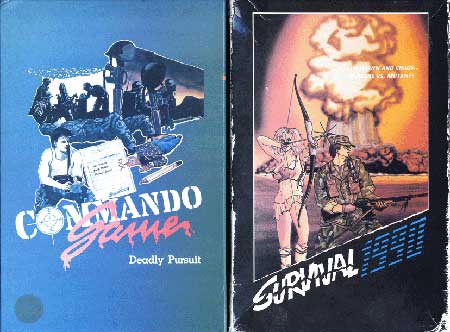 This is where Deadly Prey leaves any of its serious roots behind and trades it for ridiculous action stunts and more than thirty minutes of simple predator-vs.-prey mechanics. For most of the movie, Danton is on the run while no-name soldiers try to pin him down with gunfire. Then, Danton retaliates with some vicious attacks, slitting throats, throwing grenades in people’s pants, or shooting bazooka shells into the masses. He also takes down a helicopter with one grenade launcher shot. If anyone before this point thought Deadly Prey might get suspenseful and serious, there’s no mistaking the film’s aim here. 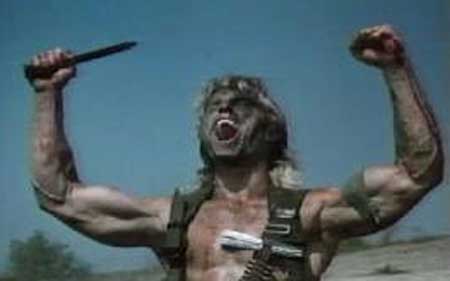 If we’re to look at Deadly Prey in generic terms of good and bad, most would probably come away from the film thinking that it is entirely bad. The scriptwriting is awful, the acting not much better, and there’s a tendency towards shock value that leaves the rest of the plot scrambling to churn out something meaningful and interesting. Detractors would see Deadly Prey as what it is – a confused, jumbled piece of testosterone-fueled cinema without much substance.

But then again, if one isn’t watching just for a movie to move or astound them, Deadly Prey is certainly a fun blast from the past. There are some funny action sequences, the one-liner quips are hilariously delivered, and the self-righteousness of Danton is enough to keep the audience rooting for him, especially once Hogan steals his wife and rapes her in a shocking display of misanthropy. In fact, Deadly Prey is surprisingly unforgiving to all of its characters, allowing most of them – even the good – to die violently in the midst of fighting for what’s right. 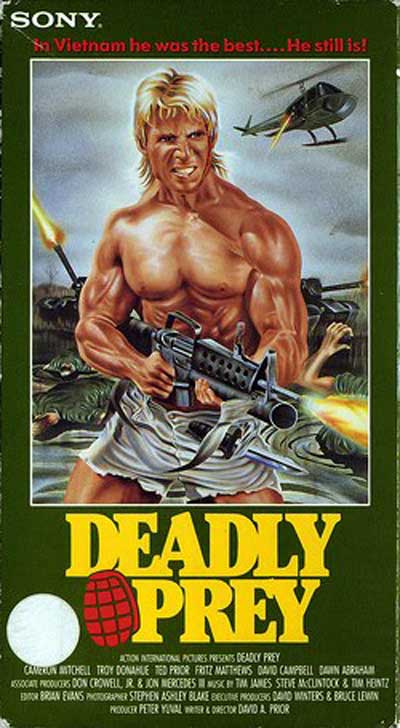 In a way, David Prior does imbue Deadly Prey with a message, even shallowly. Fighting, for good or bad, mostly ends in dead strewn across the battlefield; it might be some of the enemy, but it’s also some of your own men. A film about action taking such a stance, even if it’s accidental, is somewhat moving in its own right.