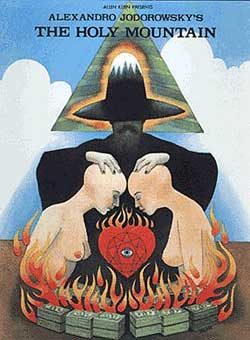 A Christlike figure wanders through bizarre, grotesque scenarios filled with religious and sacrilegious imagery. He meets a mystical guide who introduces him to seven wealthy and powerful individuals, each representing a planet in the solar system. These seven, along with the protagonist, the guide and the guide’s assistant, divest themselves of their worldly goods and form a group of nine who will seek out the Holy Mountain, in order to displace the gods who live there and become immortal.

Holy Crap! that’s what this one should be named. Though it’s definitely not crap (but that’s the expression you’ll find yourself at, after throwing this one in). I’ve not had the privilege of growing into Alejandro Jodorowsky’s work as most who have discovered this fellow. Though I must say that his is some of the most intriguing I’ve come across since first discovering David Lynch.

“The Holy Mountain” or “La Montaña Sagrada” was re-issued per the title “The Sacred Mountain”. This 1973 cult film was directed of course by Alejandro Jodorowsky who also appears in the film as an actor. 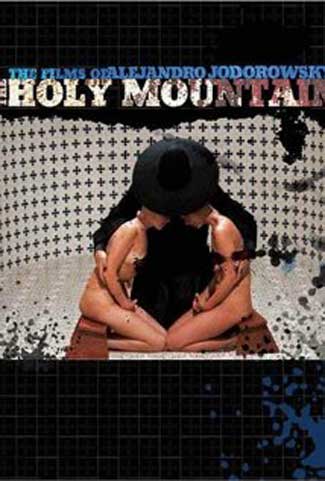 Upon viewing, you are battered and seduced with beautifully and yet disturbing collages of sequences that “seemingly” don’t fit together. While is some case this might be a point of criticism, I couldn’t help but being entirely pulled into the mind of this film makers vision. In fact, the sequences are so bizarre that my first inclination was to run to some old coverage on the film to figure out the metaphors and meanings (to get a bit of clarity). The theme of “Holy Mountain” is one of a spiritual journey. But not your usual path taken. While I feel educated enough to extract much of it, I had to turn to Wikiepdia for some clarification. Here is the excerpt that talks about the inspiration of the film:

The film is based on “The Ascent of Mt. Carmel” by St. John of the Cross and “Mount Analogue: A Novel of Symbolically Authentic Non-Euclidean Adventures in Mountain Climbing” by Rene Daumal, a student of G.I. Gurdjieff. In particular, much of Jodorowsky’s visually psychedelic story follows the metaphysical thrust of “Mount Analogue” such as the climb to the Alchemist, the assembly of individuals with specific skills, the discovery of the mountain that unites Heaven and Earth “that cannot not exist” and symbolic challenges along the mountain ascent. Daumal died before finishing his allegorical novel, and Jodorowsky’s improvised ending provides a clever way of completing the Work (symbolic and otherwise.)

“Holy Mountain” is quite a hill to climb in terms of review. I was lucky that the edition I had contained a subtitled commentary from which I could compare the filmmaker’s comments to the visual fragments that were cascading full force at me. I don’t recommend drug use, but it was clear watching this film that it was intended for the 70’s drug use culture. Originally it was reported that George Harrison was scheduled to play the lead part, but backed out when the director wouldn’t take out the portion showing one’s anus being washed. That gives you an idea of how dedicated to vision Jodorowsky was.

Filmmakers at the time could and had the freedom to occasionally make art thru cinema. There was a culture of midnight movies that appealed to a sector of this audience. It was expected to be seen in a movie theatre not a TV set. Jodorowsky took advantage of this by filling every moment with symbolism. For instance, our Christ-character enters a rainbow room with a single holy man and a camel. A struggle breaks out but the primitive learns that he is not worthy to overcome the much wiser man. The rainbow suggesting growth as the path gets lighter. These are just “some” of the symbolic nature elements within. This intricate collective designed to challenge the thoughts and translation of the viewer. But make no mistake, unlike a Lynch movie where Lynch never reveals his purpose, Jodorowsky did have a purpose and analogy for every piece, prop, and direction within the film.

One thing to keep in mind is that the film is about spirituality. Every scene, and segment has a meaning that weighs on that factor. Even the opening segment featuring 2 girls getting their heads shaved by a incognito holy man contains many scenes signifying the spiritual self, awakening, growth, God’s outward circle of life and so on. This doesn’t end but only begins our tale of a man who is mistaken for a holy man due to his Christ image likeness. During his path he encounters violence, the love for money, war, the casualties of the rich, nazism, and a number of odd segments that suggest other things. A whole sequence using frogs gives us a short historical run down of society. This is supported by symbolism, signs, Aztec writings and a few made up ones by the director.

Jodorowsky tells us that this film represents a former version of himself. A young Jodorowsky that has since passed over time. As one of the 3 major releases Jodorowsky’ was involved with, I will have to place this among the most visually arresting yet philosophically compelling of the bunch. Even when Jodorowsky’ explains each scene you still are left wondering at how it all came together. This film which was supposed to be a mainstay of Mexico ended up being banned due to much of its extremely uncompromising content. The film was deemed exceptionally important to Jodorowsky’ who cited the work as a spiritual pieces designed to change mankind

Getting back to the premise, we open up on a man laying face down (face covered in bugs and laying in his own urine) (this was explained as suggesting “useless thoughts”). This follows as a armless man sets a line in the sand with a donkey’s leg while young children pass by with their “privates” painted green. Our character resembles Christ “so much” that they cover him with lard and plaster using his outstretched pose as a mold for 100’s of life size Christ statues. ….And that’s only getting started!

This man seeks spiritual fulfillment which he finds in a monolithic structure that he hitches a ride to its summit. Upon entering this womb-like orifice he is shown that his excrement can be turned into gold and that there is much more to learn..to experience.

The film was noted as being broken up into structures starting with the “primitive” and heading into the “mystical”. A group of 7 powerful mortals are assembled to participate in the journey of entering the “Holy Mountain” so that they can claim immortality. While this portion is apparent, it gets even weirder with factories and locations that seem to be rooted around planetary influence. Weapons are made, workers carry on with their abstract lives while symbolism is poured into every piece. The film is highly rooted in the Tarot using its base as a foundation for much of its scenery. While in the mountain, they discover that many have abandoned their original motives for ascension. This has left a trail of drugs, fear, and obsession among other things.

The Holy Mountain (1973) is a extremely visual narrative with little in the way of dialog. When characters do speak they don’t move their mouths. From a viewer perspective it contains some of the most visually striking and composed message-related visions you might ever encounter.

It makes you wonder how much was spent on this film so I looked into it. $750,000 for that era was still alot of money invested. It is clear that the money was used for props, set builds, elaborate settings and character acquirement. No name actors were used which kept “that” portion under scale. Even when the scene called for a group of prostitutes, Jodorowsky hired on real street hookers to give the moment authenticity.

“The Holy Mountain” is a true cult film that I’ll admit is over just about every one’s head. I found even with an Alejandro Jodorowsky commentary explaining each scene. it was still too much to absorb in one pass. I’ve been a huge fan of the man’s work and recommend this film as his boldest yet. I believe like in the same sense of a mysterious Beatles album, that The Holy Mountain needs a few viewings to feel more comfortable with its material. At 114 minutes, it’s alot of content to absorb and process. Stating that “The Holy Mountain” is highly original is still an understatement. The film is an entity in itself that may never return even by Jodorowsky’s own hands. Don’t dismiss the film purely as a drug movie in the way you might analyze a film like “Tommy”. Jodorowsky really believed t the time he could change the world with film and thru it invoke this product of spiritual enlightenment. Whether or not the extreme images of this film move you, “The Holy Mountain” is a mountain unto itself.