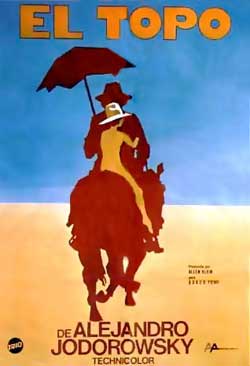 This violent and allegorical Mexican western attracted a cult following in its day. It is the story of El Topo, a gunslinger who sets out for revenge against the outlaws who slew his wife. He ends up getting his revenge and saving the life of a woman who is being terrorized by bandits. She leads El Topo (which means “the Mole” in English) on a search for the region’s top four gunfighters. But before they set off, Topo leaves his young son in a monastery. He and the woman hook up with another female and begin their search. During one battle, El Topo is wounded and the women leave him to die. His comatose body is found by a strange group of cave dwelling people who take him to their subterranean home. He does not wake up for many years. When he does, he is enlisted to help the clan dig an escape tunnel. Later they come to a tiny town where the residents belong to a weird religious cult and El Topo’s son has become a monk. The townsfolk are terrorized by a sadistic sheriff. When the clan members come into the town, the stage is set for a blood-soaked tragedy.

Some cult films exist in a state of complete obscurity so disconnected and ambiguous that viewers realize soon into them to stop asking “why and just enjoy the ride they signed up for. Alejandro Jodorowsky has created such a piece. In viewing, it was plainly obvious that a film like this deserves a mighty spot among art house showings and midnight screenings. If not for a understandable narrative then for pure cinematic experience that delves into arena’s that are both captivating and disturbing. As we quickly find out “El Topo stands for “The Mole” 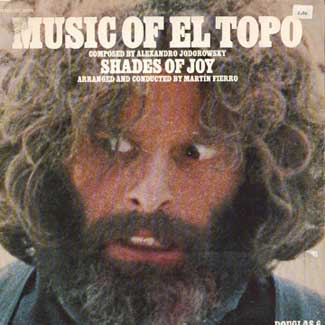 The screen opens up on a vigilante of sorts dressed in black (played by Jodorowsky himself) escorting his naked sun to bury a picture of his mother and a toy in the dessert. This act is suggested as a move into manhood. The son remains naked through the whole film for some odd reason beyond me. They proceed to visit a recently slaughtered village where dead bodies hang about and carcasses litter the streets. El Topo as he is called proceeds to hunt down the perpetrators of this grisly scene to inflict justice upon the wicked. Meanwhile outlaws play about in bizarre acts that range from foot fetishes and shoe target practice to an outlaw who draws a women in the sand and proceeds to make love to it. The bunch are either insane or just dessert drunk with laughter. 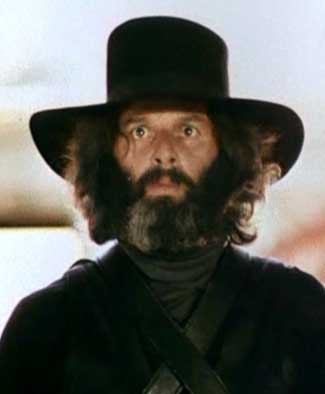 In any case, at this point most viewers would be scratching there heads on what they are viewing. Director Alejandro Jodorowsky also makes sure to confuse viewers by cutting abstractly into scenes that feel like they don’t relate or appear from no where with no lead ins. Whether this is just sloppy filmmaking or abstract genius is up to the viewer to decide. All along the way, the film provides a sense of dark comedy in a format that is rarely seen. The movie itself was longly unavailable till its recent DVD release in 2007. Up till then it remained a late night cult experience for those who could catch screenings. If anything the modern age has done for us, is enable viewers to experience many films such as this in the comfort of there homes. El Topo is part underground, part western, and part Mexican which comes from its location setting filmed in Mexico. 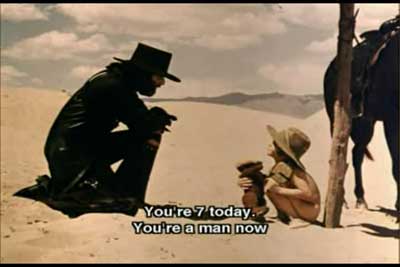 Another thing that stands out is the buildings that appear within the film that strangely feel out of place from the dessert that surrounds it. Adobe and castle-like structures at times appear as huge monoliths. The insides of them presented much larger than what they appear on the outside. 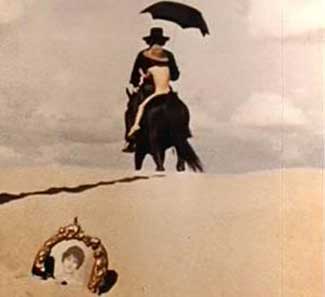 El topo is convinced to go on a journey by his latest acquaintance Mara. The task at hand is to defeat the 4 great gun masters to become the best in the land. His quest takes him on one of the strangest cult journeys on film. He first meets a mentor in the desert who instructs him into the ways of the gun. First the mentor toys with him and then embraces him to inflict his teachings upon him. Each of the 4 masters he approaches proves a sort of life’s lesson as well as the gunfight aspect. On another encounter El topo appears to a nomad who has taken shelter in a yard full of rabbits. After El topo arrives they begin to slowly die off. These and the remaining encounters are what makes this film so oddly appealing. It is also this particular style of dream-esque story telling that really stapled Jodorowsky to an underground following.

The film actually has 2 acts which tell different stories. The second act while still off kilter is more easily grasped with a story that’s easier to follow. The emphasis seems to be driven on rebirth. 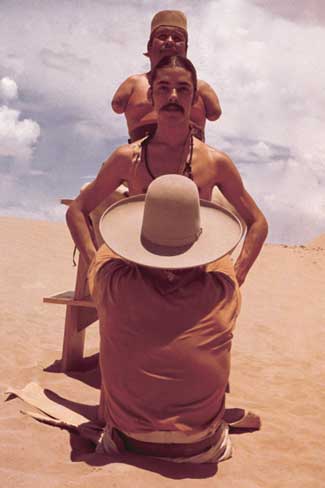 Catacombs full of incestual inhabitants trapped in the well of a cave are the focal element in this segment. El Topo is found kept as a god, even at his own denial in hope that he will be the one to save them from their isolation.

Shaved and ready, he climbs out of the cave to descend upon the local village. The village is found to be corrupt, delusional and shady while they enslave and kill off those who resist way of life. El Topo also comes across a religious cult who plays Russian roulette in the name of god while beneath a brothel is kept to satisfy the local men.

The film winds into more mayhem and strangeness which remarkably leaves images in your mind long after the viewing cycle. Cinematically brilliant and haunting in a psychological sense is the best way to describe the experience. 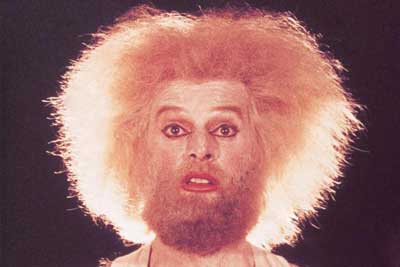 From Wikipedia:
Noteworthy figures said to be fans of the film include directors David Lynch and Samuel Fuller, actors Peter Fonda and Dennis Hopper, and performers Bob Dylan, Marilyn Manson, and Peter Gabriel.[citation needed] It has been claimed[citation needed] that this movie was the beginning of Gabriel’s inspiration for the classic Genesis concept album, The Lamb Lies Down on Broadway. John Barham recreated the score for release on Apple Records at the request of John Lennon.[citation needed] Goichi Suda cited El Topo as a key inspiration for his game No More Heroes. Similarities include having a woman asking the protagonist to defeat the gunmasters/assassins in order to be the best, and the protagonist completing several odd jobs for money.

Since at least the early 1990s, Jodorowsky has been attempting to make a sequel to El Topo. In 1996, a teaser poster was released[3], but apparently, no shooting was actually done. The original working title, The Sons Of El Topo (Los hijos del Topo), was changed (sometime between 1996 and 2002) to Abelcaín, due to disputes over ownership with Allen Klein. 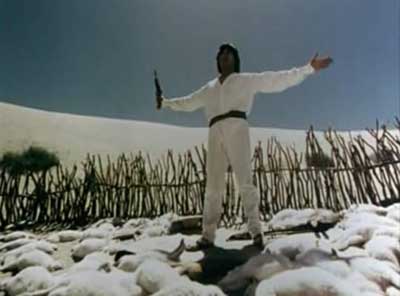