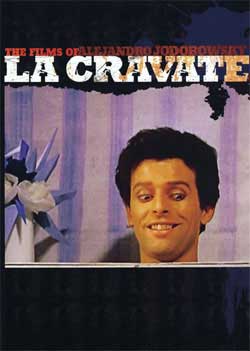 La Cravate is a Technicolor tale of a man whose sadistic girlfriend urges him to visit the head shop to shop for a new head. Miming his way through rows of living human heads, and trying several on with the help of a shop manager skilled in stitching skin, this Frankensteinian story establishes Jodorowsky’s affinity for pitting effusive love against cruelty for maximum tension between involved characters.

La Crate while probably not on the radar of most cult film lists still represents the early work of visionary Alejandro Jodorowsky. The short film which last for 20 minutes is presented without dialog exchange relying simply on cheery backing music and sound Fx. The premise of the short involves a Persian local shop where one can shop for a new head.

On elevated shelves sits various decapitated living heads that can be selected, purchased and applied to the recipient. The shop owner simply sits them down while she unscrews their current head to be exchanged for a new model. When a local walks in, he is intent on changing his head for a model to impress a lady down the street.. Though each time he arrives, she rejects his choice and sends him back for a replacement. This odd comedy manages to incorporate a bit of the absurd and the surreal on a light level. In fact much like you might compare to an episode of “I Love Lucy”.

As the man returns time and time again for a new choice, the shop owner becomes infatuated with his original head and takes it home as a companion. The man eventually ends up with a stern head that he witnessed being removed when he first arrived. Though he still yeans for his original head back. When he discovers that it’s missing he becomes depressed leading him in search of his former head. Citizens pass by without his head in sight. It’s only when he pays a home visit to the shop owner that he discovers all along the destiny waiting for him.

The piece is silly, plays out like theatre but has a central message at its core. Viewers should not expect the later more realized film style that director Alejandro Jodorowsky has made a name for himself with. This piece feels more experimental, safe and charming. Jodorowsky
later works begin to take a different direction with a more surreal darker tone that becomes a staple for several of his future works. The film was a mime adaptation based on a Thomas Mann story.

Trivia found includes the following:
This film was based on one of the twenty-five tales in the vetAla paJcaviMzati (transliterated Sanskrit – translates as “Vetala Twenty-Five”), by way of Thomas Mann’s Die vertauschten Köpfe (a.k.a. The Transposed Heads).

Released as ‘La Cravate’ with ‘The Films of Alejandro Jodorowsky’ box-set from Anchor Bay in 2007. Digitally remastered to HD from a print found in a German attic in 2006.

This film was thought to be lost for almost 50 years until a print was discovered in an attic in Germany.