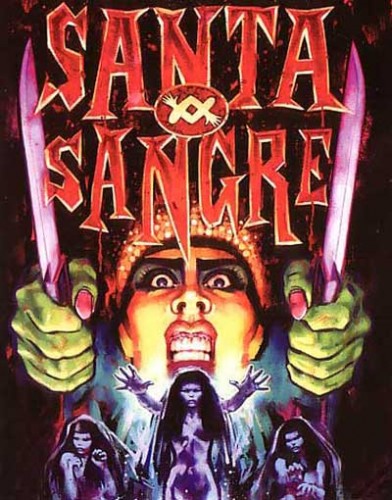 A young man is confined in a mental hospital. Through a flashback we see that he was traumatized as a child, when he and his family were circus performers: he saw his father cut off the arms of his mother, a religious fanatic and leader of the heretical church of Santa Sangre (“Holy Blood”), and then commit suicide. Back in the present, he escapes and rejoins his surviving and armless mother. Against his will, he “becomes her arms” and the two undertake a grisly campaign of murder and revenge.

Director Alejandro Jodorowsky provided us with a small selection of notable but bizarrely constructed films from his hay day of filmmaking. One such film from this collection was the surreal Mexican Italian film titled Santa Sangre. Alejandro Jodorowsky takes an approach that skips throughout timelines and combines them all into a single vision. A circus family comes to town. Fenix (Axel Jodorowsky) has been a part of the circus life from inception. His mother is a performer and his father is the ringleader. The circus also has its share of occupants who provide color to the team which include a midget friend and a seductive tattooed lady. Fenix, a child magician for the team becomes friends with the daughter of the tattooed lady whom he instantly forms a bond thats last far well into the future. 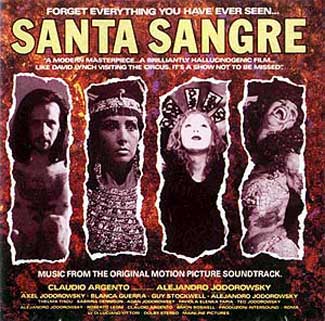 The film begins strangely with Fenix almost in a Christ like pose perched atop of a provided tree in a mental asylum. His silence and reclusiveness is revealed thru the flashbacks of his life. One of which eventually leads to a flashback of the murder of his father and the dismembering of his mothers arms. But getting ahead, these instances are pulled in thru a set up of visually captivating lead ins that revisit an instance when his mother had erected a local building into a sanctuary called “Santa Sangre” that pays tribute to a local tale of a girl who was raped in the street and removed of her arms in the process.

The victim is honored now as a patron saint with a structure that houses a blood pool meant to cleanse one of their sins. In another instance, Fenix recalls a circus elephant that dies and is pushed over a cliff in a final farewell. The carcass that provides sustenance to the villagers is them pulled apart for food by a mass of onlookers. These visions of Fenix’s life combine with the tragic circumstances of his parents. 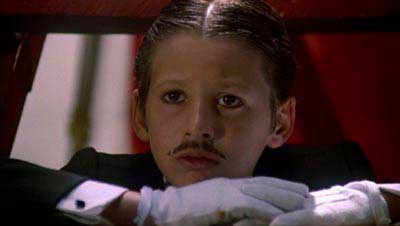 Sante Sangre might confuse its genre a bit, but its nature is based in a surrealist horror film filled with plenty of culture and character building. Concha played by actress (Blanca Guerra), is the overbearing mother who murders her husband in an act of rage when he is unfaithful to her only to be dismembered in the process in her husbands last breath. It is her influence that comes later when she is in need of Fenix to provide arms for her limbless body which is promoted thru a local vaudeville performance. Fenix can’t seem to escape the circus of his life whether its literal or the unmentionables who litter the street with filth, sex and drug use. The events sound odd in summary but actually flow quite nicely in there narration. 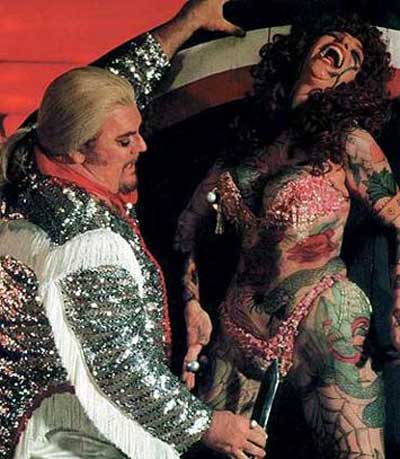 Fenix eventually finds his soul mate, the deaf and mute performer Alma (Sabrina Dennison ) who he took to as a child. Fenix, an older-now disturbed individual seems to also operate on his mothers wishes which include a paranormal hold she has over him to murder any woman who tries to take him away form her. They (the victims) are ceremoniously buried in the backyard and painted with white paint as a act of closure. 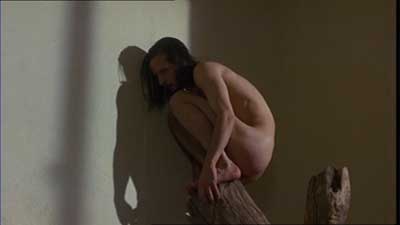 Alma re-enters Fenix’s life now later as an adult who finds him thru a local promotional billboard featuring Fenix’s act. The movie has a few surprises that bring the whole tale full circle with a lush richness that is presented in it’s own way.

The film is unique in vision and storytelling that further showcases director Jodorowskys compelling way to mix dark content with a wave of ones life story told thru the eyes of a somewhat altered universe. The film in addition to many of Jodorowsky’s other works has been hailed as a cult film that received a solid amount of critical acclaim. It was noted as one of the 500 greatest films of all time. And rightly so! 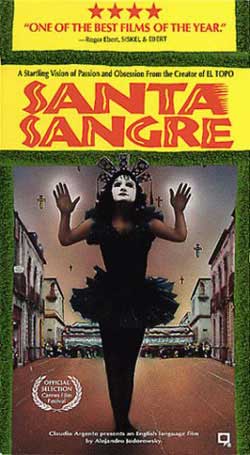 IMDB lists the following facts on the production:
As a tribute to Mexican horror films, Santa Sangre (1989) includes a scene with masked wrestlers and a “superwoman” named La Santa.

The project was launched when Alejandro Jodorowsky was commissioned to write and direct a film based on real-life Mexican criminal named Gregorio Cárdenas.

In summary Santa Sangre provides a fulfilling movie experience that should be viewed with a new set of eyes focused on a surrealist director’s view and a complex script. Alejandro Jodorowsky’s other works are also of similar interest that have set his particular brand of filmmaking in the arenas of notable achievements. 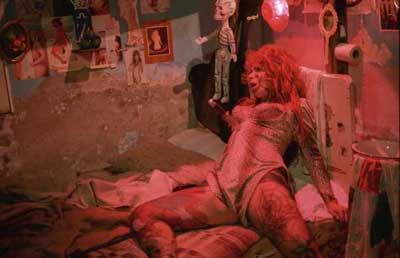