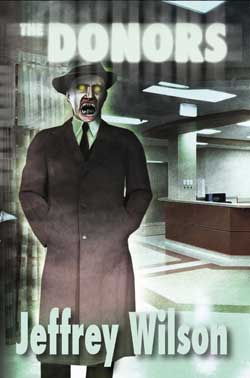 Every now and again the literary world presents a gift unto horror fans that is the pinnacle of restoring all that is delightfully macabre in the realm of terror. Undoubtedly Jeffrey Wilson is one such gift. Breaking away from the monotony and refusing to gravitate to saturated markets the masses salivate over, Wilson is an innovator and a force to be reckoned with.

I’ve had the fortunate opportunity of reading and reviewing another of this author’s novels under the same publishing house. His previous endeavor was titled The Traiteur’s Ring. Each effort was nothing shy of hypnotic, imaginative and compelling. Wilson truly has a talent for painting a very clear picture. Don’t be surprised if one day you find a motion picture based upon any assortment of this talented writer’s tales. As an aspiring author myself, I always struggled with the gauge in which to measure effective story telling. To me, what I look for in a story is something descriptive yet elusive enough to entice one’s own personal interpretation. It’s about beckoning the reader to open their minds and imaginations while at the same time being very, very cautious not to beat them over the head with it. In essence I think an effective story is one that is comparable to playing a movie within your mind. You cast all of the characters based upon familiarity, character traits, etc, setting is either crystal clear or slightly ambiguous and rising tension is developed as the story progresses. If a writer can achieve this unto their audience, then it’s damned effective. Jeffrey Wilson achieves this in The Donors with ease.

When a child named Nathan is traumatically burned by his mother’s abusive boy friend Steve the truly unusual begins to transpire at the local emergency room. While mother Sherry is filled with remorse and consumed with guilt, Steve is questioned by the police and disappears with an ominous pairing in trench coats and fedora’s.

Dr. Jason Gelman takes a special interest in the boy’s recovery. He sees much of the youth’s spirit in himself. Ghosts of memories taunt his psyche as he’s reminded of his own dysfunctional past and abusive environment. His only welcome distraction is one of the floor’s nurses, Jenny that gets his pulse racing and head swooning each time they meet eye contact.

Meanwhile Steve awakens incapacitated and is interrogated time and again if he is sorry for what he has done to the boy, Nathan. In typical macho bravado, he refuses to demonstrate and remorse. The unearthly surgeons anticipate this reaction and slowly begin to dissect the evil intent from his anatomy.

Some enchanting tension begins to develop between Jenny and Jason as we learn she too shares an unrequited passion for the good doctor. The two finally court their mutual attraction and begin a relationship. It doesn’t take long to realize that each Jenny, Jason and Nathan are connected somehow, psychic or otherwise in dream like episodes involving the lizard like surgeons as they begin to harvest organs from one victimizer turned the victim after another.

Easily another one of Wilson’s admirable nuances is to create believable characters with insecurities, every day flaws we can easily relate to. The character of Jenny, Jason or Nathan, even Sherry for that matter could just as easily be our coworker, neighbor, best buddy or perhaps we identify fallacies as readily as one of our own. We want them to overcome their adversities, to ultimately achieve as we do in our own every day conflict.

Another rare example of innovative story telling is Wilson’s use of catering to each of the reader’s senses. It’s an obvious task to want to show the reader visually what is unfolding before them, perhaps some writers may even hint upon sounds, noises or even the particular mood or feel to an environment. Rarely does a writer embrace each of the five senses for the simple reason it is far from easy to achieve. The issue of taste and smell are not as readily accessible into each story as the aforementioned senses. The use of smell, so ominous and vile it can only be described as a ‘sh*t’ or ‘fart’ smell whenever the antagonists are approaching opens up a much more broadened horizon in feeling the story. The closer we are to the plot, the more accessible it is and chances are the more memorable the sequences as well.

I envision a very promising future for Jeffrey Wilson and eagerly anticipate his next endeavor.