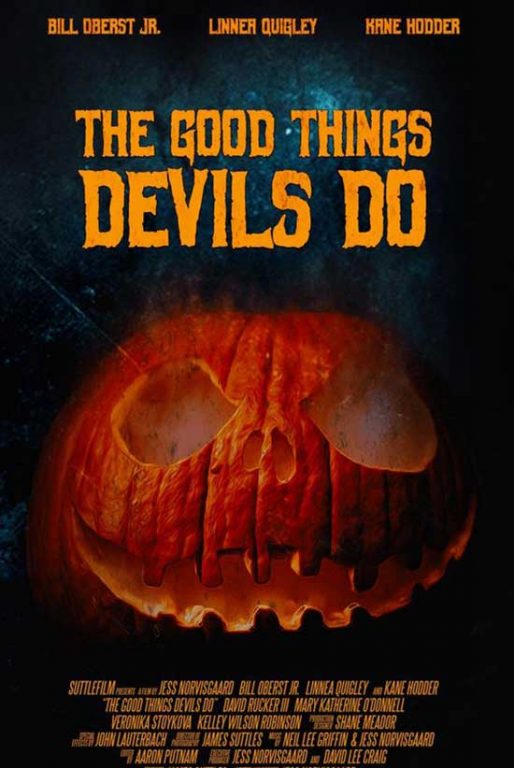 “Richard, a small-time gangster is retiring. Before he can, he must take one last job: to steal money from a rival gangster’s house. Miles apart, Melvin is a reluctant family man who has dreams of becoming a famous curator for his Museum of the Macabre. His newest acquisition? The remains of the notorious Masquerade, a vampire born from the embers of hell, slain centuries ago. On Halloween Night, their paths will collide and they’ll be forced to work together to fight centuries-old evil with everything on the line.”

We meet Melvin (David Rucker III) and the neighborhood kids want to know if he will do a show for Halloween. Caroline (Kelley Wilson Robinson) is giving the neighbors trouble. Melvin tells the kids about a curse. Melvin is wearing a Halloween sweater vest. We meet Richard played by the one and only Bill Oberst Jr. Richard is going to do one last job before retiring. Percy will be helping Richard. Kane Hodder is playing Percy. Richard has a daughter too and she is following in her father’s criminal mastermind footsteps.

Finn (Ian Patrick Mendes) is going to call Percy. Percy is up to a whole lot of no good. (Oh, Kane Hodder.) Percy will be working with Richard and Mouse (Mary Katherine O’Donnell). Mouse is Richard’s daughter. It’s Halloween and what tricks will Richard be up to. The line Louise (Linnea Quigley) says after decorating her home for Halloween is EPIC! When you watch the movie, you will know why. Melvin has a museum of macabre if you will.

Caroline (Kelley Wilson Robinson) is helping Melvin set up. (I think that what she’s doing.) This movie reminds you of Creepshow in a way. Linnea (The Return of The Living Dead, Graduation Day, Night of the Demons) is a legend. She does a great job playing Louise, a housewife that is trying so hard and yet Melvin is being rude and belittling to her. They are a strange modern family with an American Gothic flair.

Well, KANE has a mask on now, you KNOW it’s about to get bad. Mouse and Richard drop him off. Louise is in the basement with some type of creepy demon behind her… (DÉJÀ VU!) All off this madness is going on and people are outside trick or treating. The demon creature bit Louise. Richard, Percy, and Mouse are on the way to do the last job. Melvin thinks it’s a vampire, he tells Caroline to “get the medical kit.” Shouldn’t he call someone? Ghostbusters maybe? It could be a vampire, it looked like a demon.

Richard, Percy, and Mouse get into Melvin’s house. Richard and Percy are fighting. Caroline is hiding. Melvin is trying to save Louise. The demon/vampire lady gets Percy and he is not happy about it. (Evil Dead, anyone!) The creepy demon/vampire lady has powers. Melvin’s fight or flight is starting to kick in. Richard wants to bail but Mouse wants the money. So, Richard duct taped a meat clever and a knife to Mouse’s hands. This movie gets wild.

Blood, gore, Halloween, legendary horror actors. A twist that you don’t expect. Caroline is trying to take care of her mother. This is a sad moment in the movie. Melvin and Richard are trying to figure out what to do, how to fix these. The good and evil battle continues. Louise is dying or turning into a creature and Melvin is dancing. There are some good creepy moments in this movie. There is a lot happening. Richard is suffering, Melvin is suffering. Things get weird.

Melvin tells Richard it was a vampire he ordered. (I didn’t know you could do that now?) Jess Norvisgaard did a good job creating something different. It brought a few horror legends together. It can be a fun movie to add to the list of movies to watch on or around Halloween. It could be a cautionary tale if you will. People often take so much for granted. Bill Oberst Jr. and David Rucker III do a good job together. Watch the movie to find out what happens.

Make sure to check out, The Good Things Devils Do.