Book Review: The Pyramids and the Pentagon – Author Nick Redfern 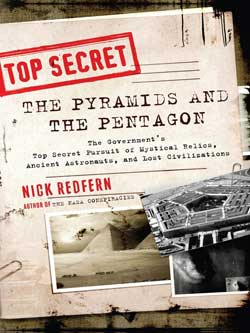 The Pyramids and the Pentagon: The Government’s Top Secret Pursuit of Mystical Relics, Ancient Astronauts, and Lost Civilizations

As authors take on new directions and research into “specific” conspiracy theory events, a greater level of scrutiny, fact finding, and investigation is occuring in  literature. Nick Redfern is one such author who digs even further into specific events and cover ups with his book “The Pyramids and the Pentagon“. While it may seem like another conspiracy book, it actually is a deeper connection to a few specific events.

The CIA is a group that was assigned many years ago to protect the fringe information that was rolling in from the public. The reasons however were very unclear and suspicious. Our book begins on just this note with reports of the famed “Dead Sea Scrolls” being one such item that has received this cloak and dagger treatment. Connections are made with UFO’s and past events, that as they put it could “shatter integral aspects of religion and history”. This simple statement seems to lay the foundation for many such events. So what does the “powers that be” fear that would indicate extraterrestrial involvement over heaven and hell beliefs?

Another mystery that has been revived, also points to this same concern……..the famed The Noah’s Ark. Why are the photos and evidence received from the side of Mt. Ararat SO protected. Why did the nazis take such great interest..and now our own CIA? This and much more arrives within these pages. Yet within it all are “those” common reports of agency threats and hush-hush agendas. Maybe the future of our own revelations will come in the form of these books acting as confidential releases. A slow grind into the deeper understanding about past, present and future.

Another angle is discussed, one that was take from the context of past idealists. It sort of goes like this: ADAM as we know thru the Bible was in actuality a race of men planted upon the world when the Earth was taken over by Ice and polar shifts. The aliens were thought to have seeded our world with the humans to evolve under observation. Women deemed EVE were said to be added later. And well, you get the point! Now “there” is a story worthy of Hollywood! What is if “wasn’t” fiction?

The book moves pretty quickly (but thoroughly) from chapter to chapter detailing more controversial issues that seem to connect in the end. We spend some time examining the Pyramids (moving those damn heavy rocks into place) and the realization that perhaps the construction was based upon some form of levitation. Sound levitation at that. We examine historical points that suggest cover-ups like the crop circles, signs left behind and the hush-hush of reported involved figures over the years. We again point to a potential of being visited long ago by higher technology that aided the Mayans and Egyptians in ways we can ‘t comprehend today. Then of course there is the idea that much of this “has” been known but is hidden and protected in the interest of “not disturbing our way of life. What about the “Pentagon”? Is there an actual Raiders of the Lost Ark” room hiding much that we’ll never know?

Nick Redfern doesn’t’ allude to just one complete instance, but instead presents the evidence, the documentation and a potential for 3 proposed reasons. Reasons are best left to the book for clarification, however it does try and make the connections between our past involvement, the CIA, the realization of alien life, and the advanced technology at the disposal of our past.

I end my read with the simple idea….what if we woke up tomorrow and realized that religion was only an idea to give us hope and keep us from prying. What if our existence is much more complex and we are kept at bay in the interest if control and peace? What if it were to all come tumbling down into a grand resolve? Spend some quality time with the findings of author Nick Redfern, you won’t be disappointed!

Book Review: The Pyramids and the Pentagon – Author Nick Redfern

Tags Nick Redfern The Pyramids and the Pentagon 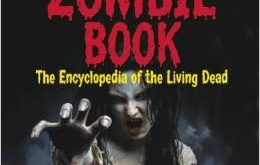 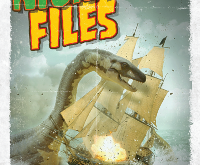 Nick Redfern Is Back With A New Book – Monster Files