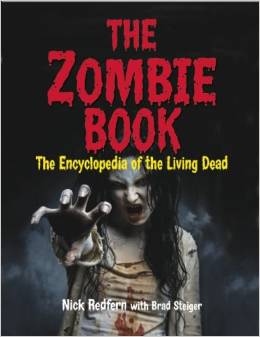 Hopefully by now you have yourself a fine collection of “Visible Ink” reference books on hand. If not, it’s probably a good time to start collecting as this publishing company has produced some of the best reference books out there. It was no surprise to me that a volume dedicated to Zombies has emerged. After all it is a hot topic and seems to be “staying” a hot topic thanx to the media attention it has received over the last few years. Maybe your still in the dark about a few undead subjects or maybe you want to “game-up” your zombie conversations. Perhaps you are one just of those types who just need to know everything there is about your genre or favorite horror subject. Then picking up “The Zombie Book: Encyclopedia of the Living Dead” would be a wise choice.

For review purposes, I can tell you that the publishing industry itself has been churning out these zombie genre books pretty regularly and pretty thoroughly. What you’ll find though is that they tend to focus on one aspect more than the others. For instance maybe your zombie collections are focused on “zombie movies” or about “how to kill zombies”. Maybe it’s just “zombie makeup” that you are more curious about. There have even been quite a few releases of “end of the world tactics” in dealing with zombies whether comedy rooted or not. “The Zombie book” takes the middle ground by providing a compendium of sorts set up in encyclopedia style that taps into alot in smaller bits.

For purists this means that you’re going to get the overview of important points while skipping more abstract (less mainstream) products like “Night of the Comet”, “Dead Alive” and “[REC]”. In fact, Rob Zombie himself seemed to be absent from this release. I attribute this mostly to Visible Press books fitting within a relative page count. To cover “everything” that ever was in the zombie-genre, you’d probably need a book 3x as big thus making it 3x as heavy and less attractive to carry around.

So with that said, “The Zombie Book” is appropriately chock full of relative zombie items. It’s not just all films and/or legends but more an overview of items and subjects that fall under higher interest items in the zombie genre. Maybe you have a curiosity of Mary Shelly’s creations (or Mary herself), Chinese Zombies or how Adolf Hitler fits into the picture. Maybe your a “28 Days Later” fan or simply more interested in the associations made between real and fictional zombies.

From Zombie strippers (another hot item), to what is a “Draugur” to something about “Gargoyles in Texas”. More selective but also more specific to a wider span of relative subjects. I tend to categorize the book as a collection of facts and fiction that “comprise” the zombie genre. While the fiction elements are obvious, subjects about NASA, “Majestic 12″ and Rabies” are real content you can grab onto that have also been responsible for some of the zombie lore.

Spanish flue, “World War Z” or that old favorite “the Omega Man”….yep, you betcha.. there is plenty here to absorb. Another important point here is that its authored by 2 great writers and frequenting experts on bizarre subject matter….Nick Redfern and Brad Steiger!. That makes it worth the price of admission alone, let alone a great read.

The book does contain pictures in black and white to add some flair to some of the chapters. Each subject within is kept minimally sufficient in explaining what level of importance it has to the genre itself. I could go on to list the hundred or so zombie items this book contains, but for good measure I’d rather leave ya with, “this is a great zombie reference book presented by 2 amazing authors.

You can find this and other fine reads over at the Visible Ink hub located here.