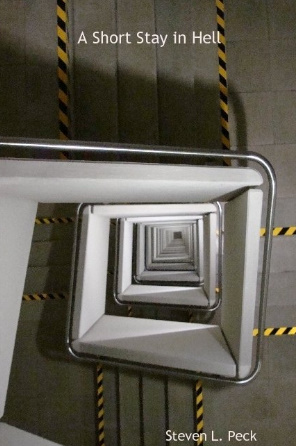 “Where do all the things you believed go, when all the supporting structure is found to be a myth?  How do you know how or on what to take a moral stand, how d you behave when it turns out there are no cosmic rules, no categorical imperatives?

Creating a viable, entertaining narrative that exists solely to expound on some philosophical idea or ideal is a tricky business. Especially if you are trying to entertain people in the process. Honestly, as interesting as they are, I know of no one who enjoyed reading Nausea or The Stranger. Not entirely surprisingly, Steven Peck’s A Short Stay in Hell, which bears its existential flag quite boldly, doesn’t stray much from that formula.

Soren Johansson has always been a faithful Mormon, taught that he would be reunited with loved ones in heaven upon his death. You can imagine his surprise when he finds himself instead in hell. Specifically, a Zoroastrian hell based on Borges’ “Library of Babel”. His eternity is spent wandering the stacks, trying to find the one book that details his life among all of the books that have ever been written or could possibly ever be written.

As philosophical exposition, ASSiH, presents an interesting question to ponder: What are we, what is our existence, when all touchstones of motivation are stripped away? Soren is place in a situation where death is not an option and the basic necessities of (after?)life are met. The guiding hands of both religion and law are stripped away. Even interpersonal relationships fall apart under the weight of so much time. All that is left is a nebulous, seemingly impossible goal that itself carries no guarantee of salvation. Of course, the answer is exactly what you’d expect from a treatise on existentialism, but it is still an interesting question.

As a story, divorced from its didactic intent, I didn’t find it particularly satisfying. It read smoothly and there were some quite harrowing moments (I’m thinking of the Direites with their roving rape/torture/murder gangs) but it was very clear that the narrative was intended solely as a tool of the message. Because of this, nothing about the situation or the reactions to it felt organic. Everything from the type of hell down to actions of a large portion of the characters all felt designed and convenient to the intended point. Also, super exposition man and woman tend to rear their ugly head quite often, stopping the story dead in its tracks to explain the implications of the hell as it stands. And, again, it ends exactly like you would expect a treatise on existentialism to end.

Finally, and this is just me picking at nits here, I’d just for once like to see someone focus on the uplifting side of existentialism. Everyone seems to focus on the “there’s no prescribed purpose to anything and nothing has any inherent value so nothing matters” line of thinking. It would be nice to see someone run with the understanding that the lack of inherent value means that you get to decide what has value and what purpose to live your life towards. Even Hitler got that, and he is pretty well universally acknowledged as a bastard butt.

Really, if you want a good tale or a way to entertain yourself for a bit of time, you won’t like this book. For those into the philosophy end, it raises some interesting questions but then brings them to the same conclusions many have come to in the past. However, many of the people I recall from my first couple years of college would have been quoting this for months. Take that for what you will.

it probably doesn’t matter whether or not you buy it here.