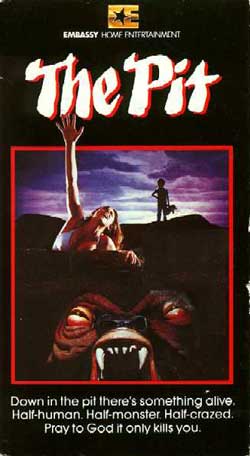 A solitary and strange boy wreaks revenge on the people who harasses him when he makes a disturbing discovery in the depth of a forest.

In the interest of full disclosure I own this movie. I bought it as part of a double pack, drive-in double feature that Anchor Bay was offering a few years back (it was coupled with Hellgate). Straight up, this is one very strange, very weird, very mixed-up movie. This Canadian film came out in 1981 and stars a twelve year old boy who, well, let’s just say is a little strange. Actually, he’s pretty much a perv. 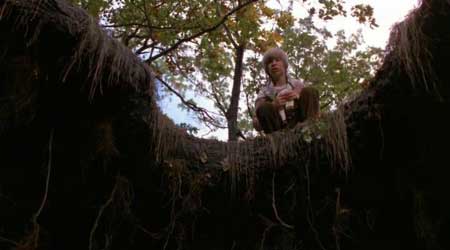 But not entirely his fault. His mother, as she puts it to the new babysitter, is a bit too motherly. But there are darker secrets going on. While not gone into in any real detail the assumption is that the relationship is borderline incestuous. At the very least he has been molested and it has left Jamie, our hero, more than a little messed up.

He doesn’t have any friends. He tries to ask a big kid at school if he can be a member of their club and he gets punched in the nose. The girl across the street tells him, “why don’t you go back where you came from funny person.” 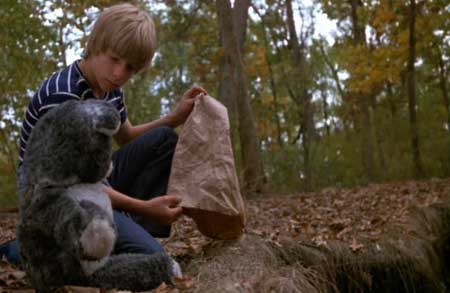 His only friend is a large teddy bear that he keeps in his bedroom. One that talks to him. And you know what, he’s not the friendliest bear around. In fact, he pretty much encourages Jamie as he loves to spy on women. Mostly naked women.

Jaime gets in trouble for bringing an art photography book into school, one that contains lots of naked women. He wants to see the librarian naked. And he definitely wants to see his hot new babysitter, Sandy, naked (played by the very pretty Jeannie Elias who would go on to do tons of voiceovers for cartoons and video games). 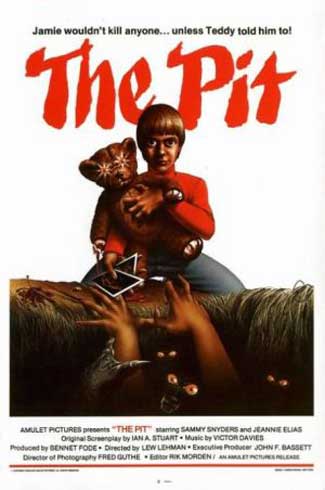 And he makes no bones about it. He tells Sandy he’s in love with her. And he tells her one more thing. A secret that only he knows about. You see, there is this large pit in the woods that contains troll like creatures called troglodytes. And man are they hungry.

At first Jamie tends to them as best he can, feeding them candy bars and then some meat from the butcher shop. But there comes a time when some good old fashioned human flesh is needed. And Jaime knows some naughty people that would make the perfect dish. 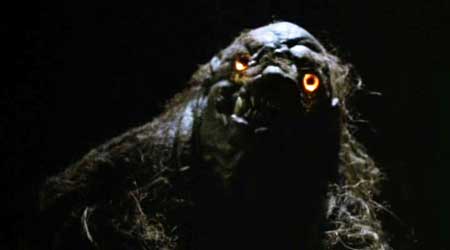 As mentioned above, The Pit is one of the strangest horror movies you’ll ever see. The first forty-five minutes is spent establishing Jamie and his relationships, or lack thereof. It is almost too long and some will be tempted to throw the remote at the television. This is supposed to be a horror movie for crying out loud. But not to worry. The last half stays on a pretty good clip as one by one numerous people meet their fate at the bottom of the pit.

The acting is standard for this type of fare. Sammy Snyders as Jamie pretty much dominates the whole movie. Jeannie Elias as Sandy the babysitter shares almost as much screen time and it is their interactions that really drive the movie. 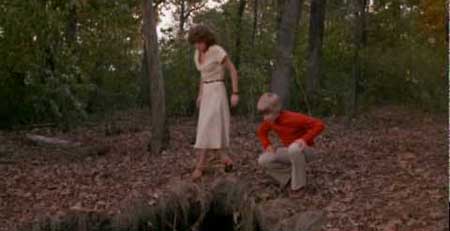 As for the special effects? Nothing much to write home about. The troglodytes are actually pretty creepy though you don’t see them too clearly. Mostly their eyes and teeth. When these creatures do get down and dirty it is mostly off screen but there is a decent amount of blood.

There is even some black humor in the movie which is a nice, albeit weird touch. Lew Lehman does a good job directing although, as mentioned above, the pace and overall weirdness of the first forty-five minutes will be a turn-off for most viewers. I will say the end is pretty cool if you make it that far. 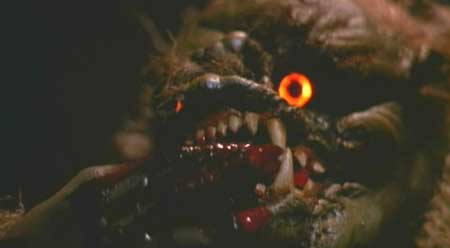 Overall, I would recommend seeing this if you are a fan of eighties horror. Rest assured you’ll probably only want to see it once. Okay, maybe twice or more. Part of its charm is that there was nothing quite like this when it came out. Actually, I don’t think there’s ever been anything quite like it. And for a horror movie, there’s something to be said about that.