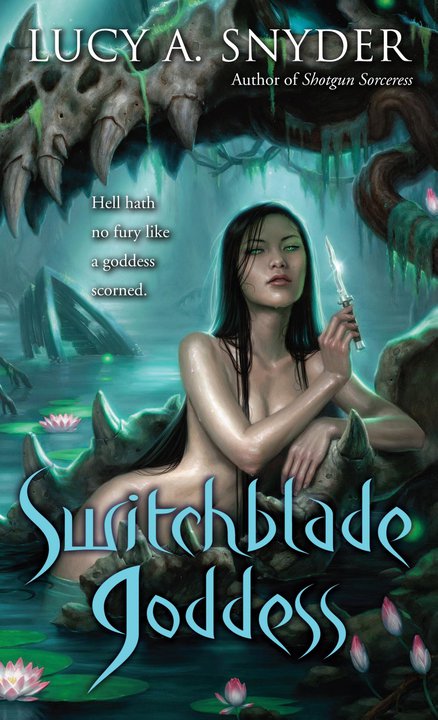 “Once you been noticed by the gods- and believe me, Jessie, you’ve been noticed all right- you have to choose your alliances carefully. There are wars going on right now with stakes and consequences you can’t even imagine. Every human is born to die, but people are good at making new people; humanity will continue no matter how many souls I take. So my murdering of another little town isn’t what you should be afraid of.”

***Warning, as this book is the third part of a series, there will, by necessity, be spoilers regarding the previous books (Spellbent and Shotgun Sorceress). I highly suggest reading those first but you give up the right to complain once you have finished reading this sentence.***

If you’ve read the previous books, you know that Jessie Shimmer is a fairly badass pile of magical pow-pow with a magical replacement eye and a fiery arm of plasmic kaboom. After rescuing her lover from one hell, she was transported to another: a town overrun by a mean-spirited goddess of destruction (Miko) and surrounded by a locked magical barrier. After rallying the remaining population of the town, battling the requisite horde of zombies and her own demonic Goad, she managed to beat Miko into a corner (if you didn’t read the previous books, you know it now). However, Miko is no less powerful and much more vicious when cornered, appears to have captured Cooper again and Pal, Jessie’s ever trusty giant spider-monster familiar, is sick and fading fast. Someone’s got some dragon skin boots to wedge in a rectum or two.

The main thing that has stuck out to me with this series is how much Lucy Snyder is willing to do to her heroine: the girl has lost an arm and an eye, been removed from any form of traditional support, turned into a fugitive from the Virtus Regnum, been loaded up with every disease known to man and has seen her lover turned into a sex slave by a seemingly indestructible goddess, not to mention the numerous bruises, nicks and scrapes she suffers along the way. Not only does this showcase how little Snyder cares for the idea of an untouchably sexy and adorable heroine (so overused in the Urban Fantasy/Romance genre), but it also allows Jessie to be presented as someone who does not stop, no matter what she has to endure. She doesn’t bitch (too much), she doesn’t whine and she doesn’t wait around for the world to make everything better for her. She gathers up her sh*t and gets to work. It’s hard and it’s ugly and she isn’t always completely successful, but she doesn’t ever stop. Fuck Yeah!

Similarly, this specific book helps to flesh out Miko into something more than a one dimensional, evil goddess out to suck up souls like candy while destroying our poor pretty’s love and life. As we learn more about Miko, from Jessie’s point of view, trapped in Miko’s own personal hell, a clear picture of how she got to be where she is develops. Sure, I still didn’t like her, but I could understand her more and that makes the simplicity of hate a bit more difficult. I always appreciate that.

On the downside, the narrative seems a bit unfocused. Perhaps a larger picture is still being established, but I usually expect to know the main focus and conflict of a series by this point and I’m not seeing it. Instead, I’m getting a bunch of very interesting events that do not seem to be clearly pointing anywhere in particular. The characters are developed well and the sense of mischievous wit is kept up enough to maintain interest, but I am concerned that it won’t last if I don’t have a clear focus to grasp onto.

If you want a simple, easy going tale of magic and lust, this just isn’t the series for you. However, if you like it a bit rough and heady then you’ll find a good way to spend a few nights.