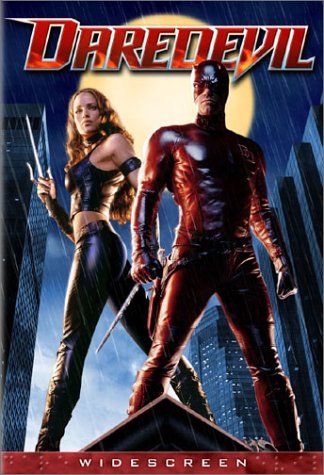 “In the roughest part of New York City called Hell’s Kitchen, there lives a boy named Matt Murdock and his father, who is a boxer. One day, Matt ran into a industrial accident and became blind after his eyes were exposed to a toxic chemical, but it also gave him other supernatural senses. Then, his father was killed by a mysterious figure. Matt, who is now a lawyer by day, is also Daredevil who hunts criminals by night. He then meets and falls in love with Elektra Natchios, a daughter of a wealthy tycoon. But what Matt does not know is that a wealthy executive going by the name Kingpin has hired another super-enhanced human named Bullseye, who always hits his target, to eliminate Daredevil and Elektra. Now, the two must stop Bullseye and the Kingpin.” (courtesy IMDB)

The posters ask, “Who Is The Man Without Fear?” Hmm, good question. One of Marvel Comics’ classic characters, created in the sixties by Stan Lee – who cameos as the catalyst for the hero’s life-changing accident – Daredevil (2003) has never really enjoyed the high profile of stablemates such as Spider-Man or Wolverine, instead securing cult status and critical praise for its dark noir-like story-lines. This anonymity was supposed to have changed with Mark Steven Johnson‘s movie, which is closely follows the now-classic stories by Frank Miller. In this particular scenario, Matt Murdock aka Daredevil (Ben Affleck) targets the crime empire of the bemuscled Kingpin (Michael Clarke Duncan) and his bodyguard Bullseye (Colin Farrell), while becoming romantically involved in a volatile affair with Elektra Natchios (Jennifer Garner), a ninja with one hundred percent beauty but, sadly, zero marbles. 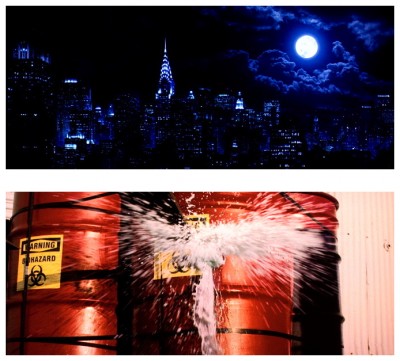 Johnson’s script streamlines Miller’s story while retaining its inherent darkness, violence and tragedy-tinged love story. Spider-Man this ain’t. In fact, it’s so dark, Johnson had to fight American censors for a PG-13 certificate, and was forced to make cuts that he certainly wasn’t happy about. Ironically, a cameo from author Miller in which he’s killed with a pen to the forehead was a major sticking point, but the censors objected mainly to a showdown between Elektra and Bullseye. Violence against women is a strict no-no. The plot construction is almost Tarantino-like, opening with a wounded Daredevil on a church roof leaning against a cross, before flashing back to his childhood origins. This is a superhero who makes mistakes, gets his arse kicked and does the wrong thing. 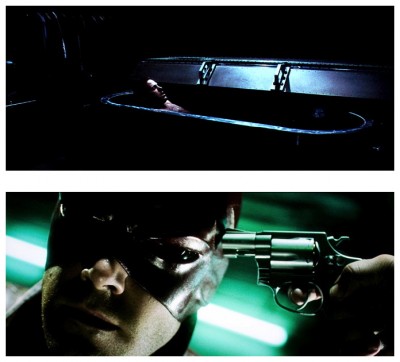 Not that superhero conventions are ignored completely. After all, what self-respecting crime-fighter doesn’t wear a figure-hugging outfit? Bullseye’s and Elektra’s costumes bear almost no relation to their comic-book counterparts, but Daredevil’s movie outfit falls somewhere between Spider-Man (2002) faithful and X-Men (2000) reinvention. If the finished get-up is a sado-masochistic fan’s wet dream, it is all too typical in a movie that features a scene in which Elektra and Daredevil caress each other’s scars (Daredevil may be blind, but he’s also an old perv) and the climactic fight between Daredevil and Bullseye takes place on a giant two-hundred-foot tall organ – pipe organ, that is. Daredevil lives near the New York neighbourhood of Chelsea, which is rather famous for men walking around in tight leather suits so, in that respect, he fits right in.

Like X-Men and Spider-Man, Daredevil took its sweet time in coming to the big screen, primarily due to Marvel’s legal wrangles during the nineties. With those troubles now over, the company is compulsively cranking out movie versions of its biggest titles. A Daredevil film seemed inevitable, yet both Disney and Sony said ‘no’ before Twentieth Century Fox snapped it up, now firmly in the superhero business with X-Men and Fantastic Four (2005). Through all this, Johnson had been attached as both writer and director, despite a track record that could hardly be considered ‘hardcore hero action’ with Grumpy Old Men (1993), Big Bully (1996), Simon Birch (1998) and Jack Frost (1998).

Once at Twentieth Century Fox, Johnson suspected that after turning in his script, his directing deal would be torn up faster than the Hulk’s trousers. To head the executives off at the pass, he spent US$7,000 on storyboarding his screenplay so, by the time he handed his script in, he had a virtual graphic novel of the entire film. Finally they declared that Johnson himself knew the project better than anybody and besides, he was cheap. So Daredevil was green-lighted, albeit with a relatively modest budget. After all, in comparison with Spider-Man, the mainstream audiences were virtually blind to Daredevil’s existence, so Johnson wanted an actor that the audience could recognise and trust. The other superhero movies of the era didn’t really need this. For instance, Hulk (2003) may have starred Eric Bana, but people went to see it for the Hulk, not for Bana, but Daredevil was going to need a little more help. 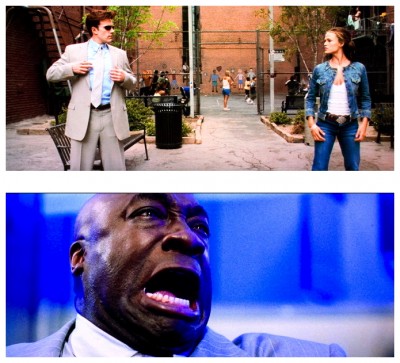 Initially Affleck was only available for the smaller role of Bullseye, so Johnson approached actors like Matt Damon, Guy Pearce, Vin Diesel and Edward Norton. But, at the last minute, a schedule change freed up Affleck for what he described at the time as his dream role. The rest of the cast quickly followed: Colin Farrell as a bald goateed Bullseye complete with a target-shaped scar on his forehead; Alias star Jennifer Garner as Elektra who would eventually get her own movie deal; and the biggest break with original comic-book lore, the role of the heavyset and decidedly caucasian Kingpin went to the heavyset and decidedly African-American Michael Clarke Duncan.

Special mention should also be made of Jon Favreau as Daredevil’s legal partner Franklin Nelson. Favreau has since become a real driving force in Hollywood, directing Zathura (2005) and creating a television series called Dinner For Five. In 2006 Favreau was signed to direct the long-awaited Iron Man (2008) and Iron Man 2 (2010) as well as appearing as Tony Stark’s loyal friend and chauffeur Happy Hogan. The films were huge critical and commercial successes, solidifying Favreau’s reputation as a director. In Daredevil, Favreau has a running gag concerning ‘giant alligators in the sewers’ which, in the original script, was written as ‘giant turtles in the sewers’ but was changed at the last minute. That’s right, many fans forget that the Teenage Mutant Ninja Turtles were originally conceived by Kevin Eastman and Peter Laird as a parody spin-off from Daredevil, as the radioactive ooze that affects Matt Murdock is the very same substance that is washed down the drain to create the crime-fighting turtles and their super-intelligent rat sensei. 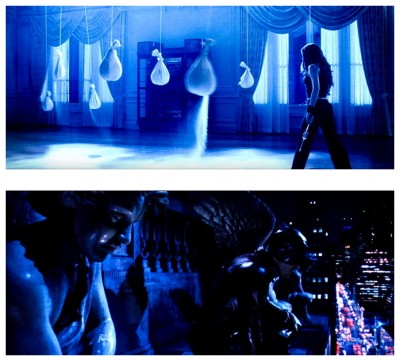 Any hopes that Daredevil had of creeping in under the box-office radar were obliterated less than a year before when Spider-Man posted a record-breaking US$114 million opening weekend. Twentieth Century Fox, sensing another hundred-million-dollar grossing blockbuster, were quick to lavish extra care and attention on Daredevil. Additional shooting was arranged on location in New York, while the number of special effects shots rose from about a hundred to five hundred. The visual effects budget on Spider-Man was approximately US$40 million, while Daredevil’s effects budget was a mere US$10 million, although the bulk of that money was spent on CGI daredevils and his radar-sense, the CGI evocation of how the hero ‘sees’ the world in cascading sound-waves. 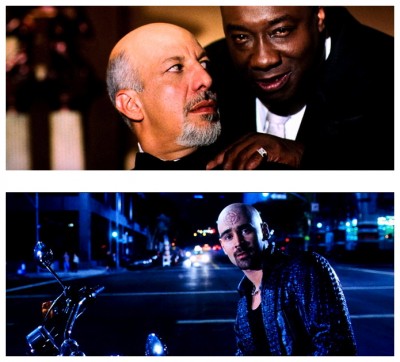 Authenticity is the key to Johnson’s Daredevil, focusing on the character’s blindness. If Affleck thought he could get away with simply waggling a white walking stick, he was sorely mistaken and, to compound matters, the mask plus contact lenses offered very poor visibility. This caused havoc and pain for the actor during rehearsals, making his martial arts wire-work extremely difficult indeed. Despite this, Affleck was signed to return in a sequel that was given the go-ahead even before Daredevil opened. Johnson even had a couple of scripts ready: Born Again would have pit Daredevil against the Kingpin again, and Guardian Devil was a quasi-religious tale written by cult filmmaker Kevin Smith (who has a cameo in Daredevil as a laboratory assistant named Kirby). Unfortunately, due to Daredevil’s relatively poor opening weekend at the box-office, any plans for a sequel were quickly dumped.

That being said, there was a spin-off of sorts. Jennifer Garner reprised her role in Elektra (2005) and Affleck even filmed a cameo appearance at Garner’s request. Affleck stated he would return in the role only if Fox promised to tell the darker stories. In 2006 however, Affleck stated that he would never reprise the role. Although he received considerable praise for his performance as Daredevil, Affleck was awarded a Razzie that year for his portrayals in Paycheck (2003) and Gigli (2003), both of which were far worse than Daredevil. Elektra ranked fifth in its opening weekend, taking only US$13 million, and domestically the total gross was US$25 million, at the time the lowest for a movie featuring a Marvel Comics character since Howard The Duck (1986). With that rather embarrassing fact in mind, I’ll respectfully ask you to join me next week when I have the opportunity to give you another swift kick in the old brain-box with another fright-filled fear-fest from the far side of…Horror News! Toodles! 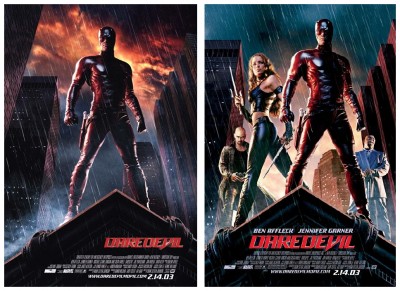 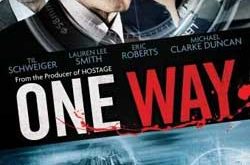