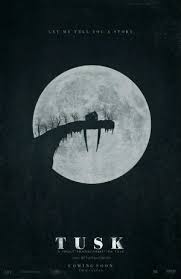 When podcaster Wallace Bryton goes missing in the backwoods of Manitoba while interviewing a mysterious seafarer named Howard Howe, his best friend Teddy and girlfriend Allison team with an oddball ex-cop to look for him.

As I was watching Kevin Smith’s latest film, Tusk, I began to wonder who came onto the Hollywood scene first: Smith or Quentin Tarantino? I had this thought because a lot of the dialog here is Tarantino-esque in its rapid fire delivery and its oddball qualities (Turns out that Tarantino was on the scene first). That’s not to say that I found any of Smith’s dialog familiar, Tusk is far too bizarre a film to be called anything but “Unique”. But does that make it worth watching?

Justin Long plays podcaster Wallace Bryton, who along with his partner, Teddy Craft (Haley Joel Osment), host the very popular “Not See Party” podcast. Wallace has made plans to travel to Canada to interview someone whose claim to fame is a video of him accidentally slicing off his leg. Upon arriving, Wallace discovers that his subject has committed suicide, leaving him without an interview subject. But Wallace happens upon an ad (In a restroom), from someone that promises to tell grand stories in exchange for some work around the house. Once Wallace arrives, he finds a lonely, wheelchair bound man named Howard Howe (Michael Parks) who promptly plies Wallace with some hot tea and some amazing stories of his encounter with Ernest Hemingway during world war 2. But (As is the case in movies like this one), the tea is spiked with a knockout drug, and Howard has a despicably horrendous plan in store for poor Wallace.

It turns out that Howard wants to turn Wallace into a walrus.

That’s what I said, you’re not reading it incorrectly. For reasons too odd to get into here, Howard wants to turn Wallace into a walrus, not a figurative walrus – a literal one. And Howard wastes no time in amputating one of Wallace’s legs off in preparation for the full transformation from human to walrus. Wallace manages to call his girlfriend, Ally (Genesis Rodriguez) & Teddy, asking for help but they have no idea exactly where in Manitoba he is. So when they fly to Canada to look for him without success, they run into Guy Lapointe (Johnny Depp), a quirky detective who’s spent the last ten years hunting a serial killer who chops his victims legs off. Together the three of them, try to find any hint of a trail that might lead them to wherever Wallace is.

That’s about it, Smith’s script makes no real demands of its audience. What it does demand from whomever is watching it is a keen ear, as the script is extremely dialog heavy with lots of lines that sound like they were excised from a Tarantino script. But Smith is no copycat, if you’ve seen Clerks (1994) or Dogma (1999) then you know he has a way with his dialog that’s extremely similar to Tarantino’s. The big problem here is that there isn’t a whole lot of characterization here in Tusk to help augment its decidedly wacky central premise. The film isn’t particularly scary – it’s just bizarre, so a bit of character development would’ve helped move the narrative along and get the audience more involved in what’s going on.

Long’s character is written as sort of a semi-asshole and he does an admirable job in pushing that across but he’s also portraying the person we’re supposed to be feeling sorry for, there’s an odd dichotomy there that just doesn’t completely gel, but Long does manage to imbue his character with enough pathos to make an audience pity his situation. Both Rodriguez & Osment (Where the heck has he been?), give bland but acceptable performances and Depp apparently decided that channeling his inner Clouseau and slightly crossing his eyes would make Guy an interesting character (it doesn’t). Tusk belongs to Michael Parks, plain & simple. He fairly drools over Long when they initially meet and his deft delivery of Smith’s dialog give Howe a lot of interesting layers of complexity. The reasoning behind doing what he’s attempting to do is just plain silly, but he so fully inhabits the character that turning someone into a walrus sounds almost plausible.

The walrus makeup (Designed by Robert Kurtzman) is bizarre enough to be effective, with some flourishes that are reminiscent of Frankenstein’s monster, but it’s still kind of silly looking. Tusk reminded me of a few films, particularly Ssssss (1973) and I’m supposing that the makeup design is some sort of homage to films like this one. It also has echoes of The Fly (1986) with an ending that’s vaguely reminiscent of The Fly 2 (1989), but it has none of the emotional content of the former and it’s far sillier than the latter. Hell, Ssssss is all about a man turning another man into a snake and that had more emotional content than Tusk does. 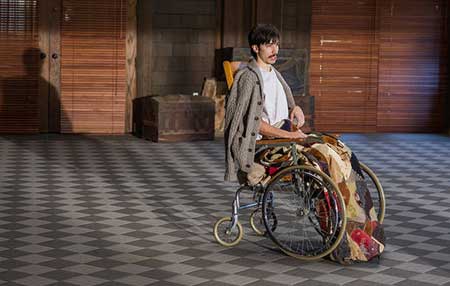 Despite being one of the most bizarre & pointless films of the year, I liked Tusk – but keep in mind, I really like bizarre, pointless movies. What’s interesting to me might not necessarily be interesting for you, so I’m recommending it with some reservations. I’m not exactly sure what it was that Smith had in mind when he decided to make this film although it’s based on an idea he came up with while recording his popular podcast. He’s since gone on the record saying that he’s at the point in his life where he just “Didn’t give a f*ck anymore” & that’s all well & good Kevin, more power to you. But you have a job in which you’re asking people to give a f*ck about what you do and making oddball movies like Tusk might not be the direction you wanna take if you’re asking people to pay money to see them.