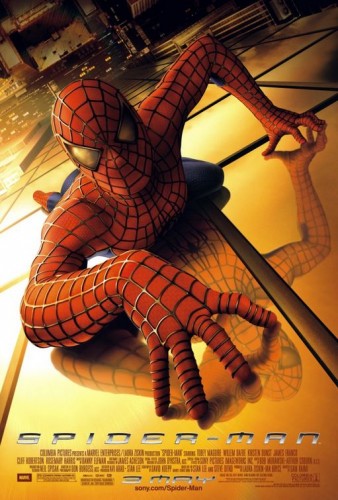 “Based on Marvel Comics’ superhero character, this is a story of Peter Parker who is a nerdy high-schooler. He was orphaned as a child, bullied by jocks, and can’t confess his crush for his stunning neighbourhood girl Mary Jane Watson. To say his life is ‘miserable’ is an understatement. But one day while on an excursion to a laboratory a runaway radioactive spider bites him, and his life changes in a way no one could have imagined. Peter acquires a muscle-bound physique, clear vision, ability to cling to surfaces and crawl over walls, shooting webs from his wrist – but the fun isn’t going to last. An eccentric millionaire Norman Osborn administers a performance enhancing drug on himself and his maniacal alter ego Green Goblin emerges. Now Peter Parker has to become Spider-Man and take Green Goblin to the task – or else Goblin will kill him. They come face to face and the war begins in which only one of them will survive at the end.” (courtesy IMDB)

When Amazing Fantasy #15 hit the newstands in August 1962, it bore a cover price of only twelve cents. By the turn of the century, The Overstreet Comic Book Price Guide conservatively valued a mint-condition copy of the issue at around a quarter of a million American dollars. In August 2011, an anonymous comic collector paid US$1.1 million for a near-mint copy of Amazing Fantasy #15. What distinguishes the slim volume – written by Stan Lee, drawn by Steve Ditko with cover art by Jack Kirby – was a cover story introducing timid Peter Parker as a masked avenger who, bitten by a radioactive spider, used his suddenly acquired arachnid traits to fight crime as Spider-Man. Parker’s spidery characteristics – his now familiar spider-sense, his superhuman strength and his ability to crawl up walls – were initially a hard sell for the then-young Stan Lee. Marvel Comics publisher Martin Goodman feared younger readers would be nonplussed by the laconic hero clad in red and blue and repulsed by his spider origins, and assigned the character to the last issue of what at the time was one of Marvel’s less successful publications. After unexpected acclaim, Amazing Fantasy mutated into The Amazing Spider-Man and rose to become one of the most enduring titles in the Marvel pantheon.

Dozens of like-minded crime-fighters have since crossed paths with Spider-Man – including the Fantastic Four, Submariner, Daredevil, Thor, Hulk, Captain America, even Howard The Duck. All were cast in the Marvel mold as the mortal offspring of technology-gone-wild, in contrast to their more god-like DC Comics cousins like Superman, Wonder Woman, Green Lantern and Batman. Spider-Man’s foes included characters similarly transformed by atomic-age mutation, such as Electro, Lizard, Rhino, Scorpion, Sandman and Venom. After more than three thousand comic book adventures, the web-slinger has prevailed and more recent publications, such as Ultimate Spider-Man – sleeker and more toned but still sporting red and blue – was made available online. Myriad merchandising spinoffs, animated television series and, more recently, a large-format digitally animated 3-D theme park ride at Universal Studios have also fueled Spider-Man’s popularity. A live-action motion picture seemed inevitable, yet a CBS television series starring Nicholas Hammond with brave but obviously limited physical effects and zero super-villains – released theatrically outside the USA in 1978 – disappointed fans. 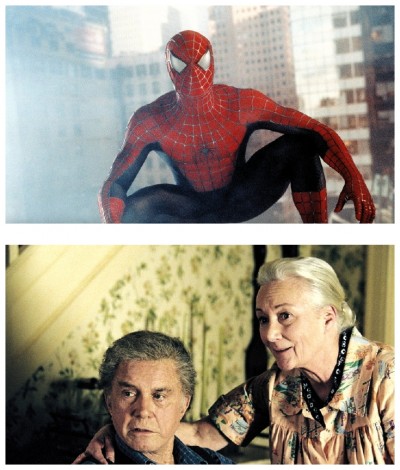 Cannon Films mounted the first attempt at a full-fledged Spider-Man feature in 1985 from a treatment by Leslie Stevens (creator of The Outer Limits television anthology) and a screenplay by Ted Newsom and John Brancato. As the screenplay evolved, production designer Mentor Huebner produced storyboards and large-format charcoal renderings of Spider-Man in action. Canadian visual effects supervisor Robert Ryan consulted with stop-motion animator Steven Archer (Ray Harryhausen‘s assistant) to determine the feasibility of animating Spider-Man nemesis Doctor Octopus, the radioactive spider, and long-shots of Spider-Man swinging through the streets of New York.

When Cannon co-founders Menachem Golem and Yoram Globus dissolved their partnership in 1989, Golem continued to pursue development himself, then sold the rights to Carolco Pictures in 1991. Carolco brought with it the attentions of director James Cameron, whose involvement piqued the interest of the comic book community, particularly after his detailed treatment appeared online in 1996, imbuing the wall-crawler with genetically mutated wrist spinnerets and pitting him against three of his comic book adversaries, Electro, Sandman and Doctor Octopus. When complex litigation over the ownership of rights stalled progress., Cameron eventually withdrew from the project and, in 1999, Columbia Pictures brought in screenwriter David Koepp and, nine months later, director Sam Raimi emerged as the winning candidate to direct, with John Dykstra supervising special effects and digital production based at Sony Pictures Imageworks in Culver City. 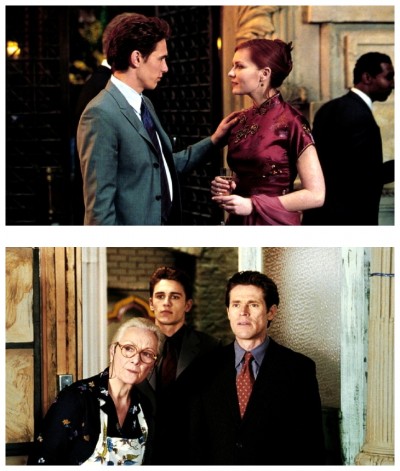 To discuss the possibilities for Spider-Man’s screen ingredients, Dykstra first met Raimi in Georgia, where the director was shooting The Gift (2000). By this time the screenplay was still a work-in-progress, so they were in a preconceptualisation stage, trying to figure out the physical components of the character that were necessary to tell the story. They also addressed narrative issues that had become complicated by the character’s rich history. One of the problems was that the script contained a surfeit of villains, and had to eliminate certain characters in order to clarify the story. Ultimately, the plot ejected Doctor Octopus and the other villains in favour of a single adversary, the Green Goblin – the alter-ego of embittered chemical engineer Norman Osborn – who first appeared in The Amazing Spider-Man #14 in 1964.

In Spider-Man (2002), Peter Parker (Tobey Maguire) is a dorky but sweet-natured teenager living in a modest house in Queens with his Uncle Ben (Cliff Robertson) and Aunt May (Rosemary Harris). Parker pines in vain for the girl next door – the blazingly red-headed Mary Jane Watson (Kirsten Dunst) but she’s already hooked up with his best friend – the dull but spectacularly wealthy Harry Osborn (James Franco). On a school science trip, Parker is bitten by a genetically modified spider and, after a nauseous night, Parker wakes to find he’s acquired some serious spider qualities: Agility; strength; the ability to shoot sticky web goop from his wrists; and fingers sticky enough to scale walls. Meanwhile, under pressure from financiers to perfect his ongoing genetic experiments, Harry’s father – millionaire scientist Norman Osborn (Willem Dafoe) – has unwittingly transformed himself into the Green Goblin, a power-crazed lunatic clad in a shiny metallic suit, his face hidden behind a gargoyle mask frozen in a permanent cackle.

Finally freed from many years of development hell and with an almost continually revolving door of directors attached, Stan Lee’s classic comic hero comes vividly to life via the filmmaker who – let’s face it – was always born to make the definitive Spider-Man movie. After spending much of the previous decade re-inventing himself with character-driven dramas like A Simple Plan (1998), For Love Of The Game (1999) and The Gift, Sam Raimi’s newfound maturity was discarded – or at least temporarily interrupted. Spider-Man is a triumphant return to the full-tilt boogie visual style and cartoonish mayhem that made his Darkman (1990) and The Evil Dead (1981) films such a blast. Armed with a sh*tload of money and a breezy script that deftly swings between unbridled reverence and a jokey tongue-in-cheek knowingness, Raimi’s lovingly crafted film is, for the most part, simply exhilarating and spectacular. Faithful enough to thrill the most unwashed comic fan and brimming with enough humour and wild set-pieces of vintage Raimi, his disenchanted disciples gleefully returned to their bookmarked fansites with a newly restored zeal. 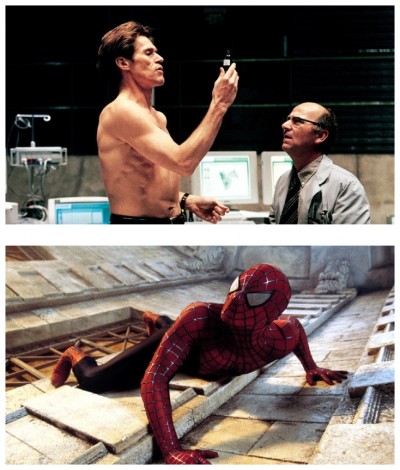 But lumping all the kudos onto Raimi is to overlook the substantial accomplishment of screenwriter David Koepp. As the franchise-killing Joel Schumacher films Batman Forever (1995) and Batman And Robin (1997) proved, there’s a lot to be said for ‘keeping it real’ even if your main character is a guy bouncing around in tights and, unlike Bryan Singer‘s characteristically cold treatment of the first X-Men (2000) movie, Koepp’s take on Spider-Man wisely contains enough heart and soul to satisfy mainstream audiences – you know, those folks who couldn’t give a rat’s arse about a guy in a funny suit. There’s no shortage of Raimi’s visual va-voom, you can almost hear the director cackling louder than Dafoe’s Green Goblin when he orchestrates the mammoth set-pieces that are liberally scattered throughout the film: The Goblin’s explosive interruption on a Macy’s Day parade in Times Square – inspired by the balloon parade in Tim Burton’s Batman (1989) – or the vertigo-inducing sequence atop a Manhattan bridge as Spider-Man attempts to save his beloved M.J. and a cable-car full of children – are ingeniously and energetically realised, even if they don’t always convince. Some of the CGI looks almost as animated as the old Ralph Bakshi cartoons, the theme song of which can be heard over the closing credits, but the doomed romance at the film’s centre always convinces.

With his soulful eyes, Tobey Maguire makes a peerlessly perfect Peter Parker, Dunst is suitably adorable as M.J. with all that red hair. The yearning in their scenes makes their ‘almost romance’ surprisingly affecting. The supporting actors have too, for the most part, been cast with a similar care. Cliff Robertson and Rosemary Harris are pitch-perfect as Uncle Ben and Aunt May and, under his spiky wig, J.K. Simmons effortlessly embodies grouchy tight-arse Daily Bugle editor J. Jonah Jameson. Raimi fans also relished seeing the director’s long-time colleague Bruce Campbell and brother Ted Raimi‘s hilarious (but way too brief) cameo appearances. Only Dafoe’s Norman/Goblin proves to be a little predictable – whilst Dafoe seems to be undoubtably having fun as the film’s major villain, he’s played psychos too many times to really bring anything new to the table. It’s a serviceable performance but hindered by his rigid Goblin mask which hides most of his creepy features. The dramatic limitations of the mask become painfully obvious when the Goblin and Spider-Man exchange some dialogue on a rooftop scene, but Raimi wisely ensures it doesn’t happen again for the finale.

Fans won’t think twice about purchasing the multi-disc DVD sets – let’s face it, they’d probably buy the old Nicholas Hammond movies too if they were available – but it’s nice to report that unlike most blockbusters, Spider-Man is an incredibly satisfying film, even for those who don’t fall into the teenage demographic, and a film that blithely achieves everything it’s set out to achieve, often spectacularly. It’s with this thought in mind I’ll ask you to please join me next week when I have the opportunity to present you with more unthinkable realities and unbelievable factoids of the darkest days of cinema, exposing the most daring shriek-and-shudder shock sensations ever to be found in the steaming cesspit known as…Horror News! Toodles! 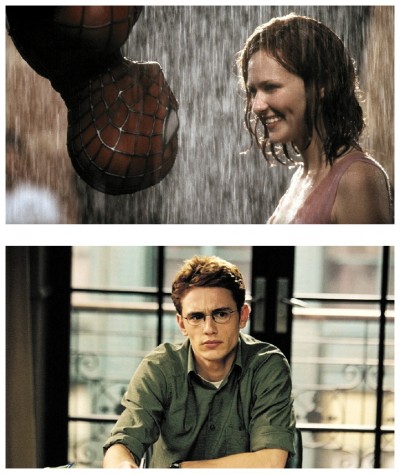