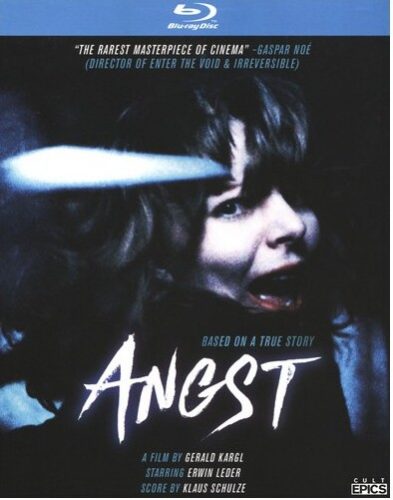 A newly paroled murderer finds it impossible to resist the urges to kill that he has repressed for ten years and sets out to wreak as much havoc as possible before being recaptured and sentenced to life in prison.

Tuesday, January 15, 1980 was a fun day for me.  I was in the fifth grade, had off from school thanks to Martin Luther King, Jr., and had just obtained The Black Hole Storybook from my grandmother who purchased it for me from my favorite bookstore in hardcover for all of $5.00, thrilled to have something related to this film that I adored, complete with color photos.  I had no idea at the time, but on that same day half a world away in Austria, a sick, twisted and deplorable psychopath by the name of Werner Kniesek had been let out of prison on a three-day furlough to search for employment.  This maneuver would pave the way for Kniesek to give in to his urges of wanting to kill by breaking into the home of a woman, her daughter and her wheelchair-bound son the following day, and spend the next six hours torturing and murdering them all in gruesome fashion.  It is this horrific event that is depicted in Gerald Kargl’s 1983 film Angst, which is one of the most expertly made yet highly upsetting pieces of cinema I have ever viewed, the (mercifully) only feature film directed by Mr. Kargl.

Angst, is extremely effective in depicting The Psychopath (brilliantly played by Erwin Leder) on his first time out with a gun, ringing the bell of a random home and, without reason, murdering the elderly woman who answers the door, her husband falling by her side in shock (the camera is attached to The Psychopath’s body to enhance the sense of unease and make the audience play into his distorted mind).  Captured and jailed for ten years, he is set free following the end of his sentence, but the problem lies with him and his inability to control himself.  Why does no one do anything about this?  Where is Dexter when you really need him? 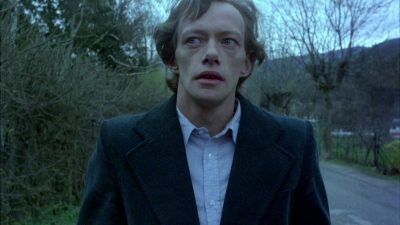 Blowing off his freedom, he immediately sets out to find a female victim to hurt (when he was thirteen, he was seduced into sadomasochistic games by a woman in her forties; unfortunately, he was too young to separate fantasy from reality and can now only reach orgasm through increasingly bizarre and violent acts).  An attempt to seduce two young and attractive female diner patrons stops before it can get started, and a taxi ride with a female driver ends abruptly before he can muster the guts to harm her.  Stressed, he breaks into a house and finds a man in a wheelchair who can only recite the word “Pappa”.  When the mother and her daughter return home, all hell breaks loose in real time as The Psychopath tortures and eventually murders the house dwellers.  He takes their dog and feeds him well, but is eventually captured. 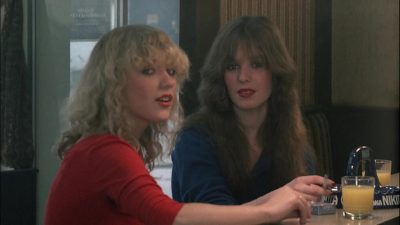 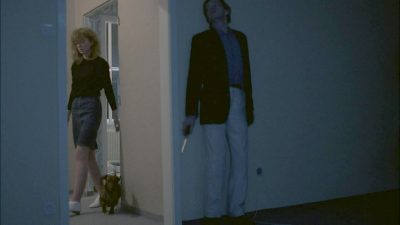 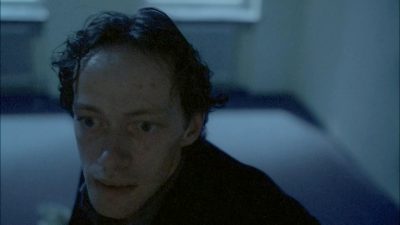 The most distressing parts of this film are, of course, the murders, carried out before the eyes of the family Dachshund who attempts to stop The Psychopath but ends up hiding under a blanket in one of the film’s most heartbreaking moments.  Actor Erwin Leder throws himself into the role with such gusto and commitment it is almost unbearable to watch as he strangles the mother, drowns the paraplegic, and stabs the tied-up daughter to death, all for his own perverse reasons. 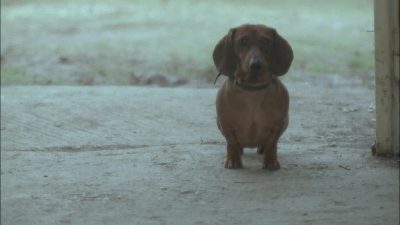 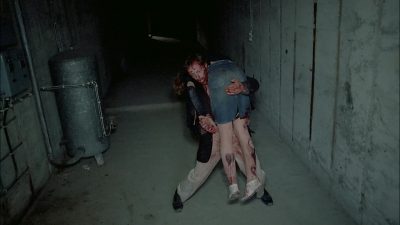 We hear his thoughts through a perpetual voiceover that reveals why he is the way he is.  We want to reach into the screen and scream at him to stop, though he is powerless to do so.  Do we hate him?  Do we feel sorry for him?  In reality, Kniesek is still alive and in prison.  Why?  Why didn’t someone just kill him, this person who is so dangerous as to be unfit to walk among the rest of us?

As far as the film goes, I don’t recall ever hearing about it in the days of VHS rentals.  The closest I ever came to seeing anything this disturbing was the well-known Henry: Portrait of a Serial Killer (1986) on video in 1992.  Henry was a composite of real-like serial killers, and even 2008’s The Strangers was based upon the brutal and grisly Keddie Murders which took place on April 11, 1981, a case which, 35 years later, has gone completely cold.

Angst had a tough time getting theatrical exhibition 33 years ago.  Now, with the Internet and real images of people dying almost daily, the film has had a much easier time of being distributed as the public is probably almost numb to such imagery (sad to say).

The Blu-ray of the film contains the following extras:

Is the film a masterpiece?  Perhaps.  It is a powerful work, with cinematography by Polish animator Zbig Rybczynski, and elegiac music by early Tangerine Dream member Klaus Schultze.  However, it is not the sort of film that I would want to watch again…