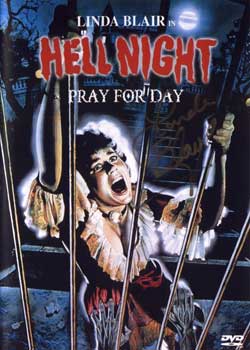 Four college pledges are forced to spend the night in a deserted old mansion where they get killed off one by one by the monstrous surviving members of a family massacre years earlier for trespassing on their living grounds.

I hate Linda Blair. There! I said it and I mean it too. Why do I hate Ms. Blair at all you ask? I certainly don’t know her so it doesn’t have anything to do with her personality, I’m sure she’s a sweetheart. She certainly looks like a nice lady with her big rosy cheeks & her dazzling smile. Plus, she’s a big animal lover (Horses especially). The Black Saint is a big animal lover as well despite my allergies to most of them. So what’s with all of the hate? Well, let’s take a trip in my “WABAC” machine (Borrowed from Sherman & Mr. Peabody), all the way back to the year 1973 shall we? A nice year for movies for sure but I remember that year for one thing & one thing only…”The Exorcist”. 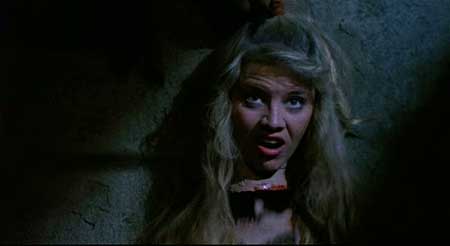 Long story short, I saw “The Exorcist” in 73′ and was summarily traumatized for the rest of my life. To this day I still get nightmares two or three times a year over that movie. I have NEVER seen it again since that fateful afternoon, that afternoon when my dad actually made me sit in my seat to watch the horror unfolding in front of me. He wouldn’t even let me cover my eyes to shield my psyche from all of the head spinning, foul mouthed nightmares taking place on the big screen. To this day I can’t fathom why people were actually laughing at some of it, it certainly wasn’t funny to my eyes. Mind you, this is not to criticize the film, it’s a brilliantly effective work of cinematic art. Quite literally the scariest movie ever made in my opinion. And who was the star of this film? Linda “I’m ruining The Black Saint’s life forever” Blair. 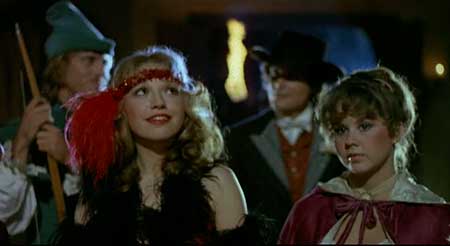 Yeah, yeah….it’s not her fault, she was just acting. Fuck that noise! I’m scared of her, plain & simple. So whenever I see her in any movie, any movie at all, I get nervous. Luckily for me, “Hell Night” is nothing at all like “The Exorcist”. It’s more of a typical 80’s slasher type of film, albeit one that is slightly better than the usual fare. 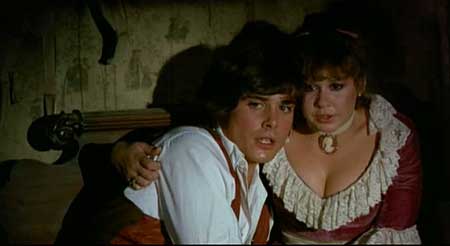 The plot is pretty standard. Four college students (2 male, 2 female) are pledging to a fraternity/sorority & part of their hazing requires them to spend the night at the dilapidated and abandoned Garth Manor. It was here that 12 years ago, old man Garth went mad & brutally slaughtered his entire family in cold blood before killing himself. His children were all born deformed and apparently it was just too much for him to take but there were always rumors that one of the children survived the massacre & is still living within the ruins of Garth Manor. And he reportedly doesn’t like company…not at all. Making matters a bit worse, there are some members of the fraternity already in the mansion who are setting up some gags to scare the pledges out of their minds and give themselves a big laugh at the same time.

Blair plays Marti Gaines, the “Nice” girl who always frowns on shenanigans like this. Of course, she’s also the heroine of the piece & although I hate the woman, she’s not the worst actress in the world. She actually deserves a bit better than this script offers her but as far as slasher film scripts go, this one is still satisfactory. Alongside her we also get Vincent Van Patten (Seth), Peter Barton (Jeff) & the ever so luscious Suki Goodman (Denise) as well as a slew of other actors who are a lot older than the ages they’re playing here. You might remember Barton from “Friday The 13th: The Final Chapter” & Van Patten’s biggest claim to fame was his career as a tennis pro during the 80’s. Otherwise all involved were relegated to guest starring roles on TV throughout the 80’s & 90″s. 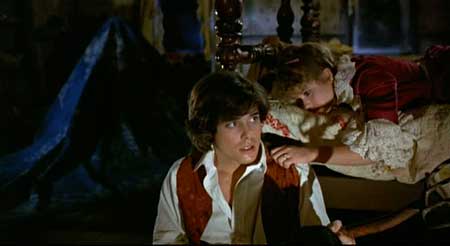 All of the actors perform a bit better than expected and the film never really drags. The set up is fairly standard but effectively creepy nonetheless. The kills are relatively blood free despite what you might have heard but the sound mix makes them feel really nasty and sometimes that’s far more powerful than actually seeing the kills take place. The mansion is also extremely grubby looking & it makes for a powerful setting in which the hi-jinks take place. Everything in the film looks really great, it’s readily apparent that there was some thought put into the set design which is a nice change of pace for a film like this. You’ll feel the cobwebs brush against your skin as the kids enter the mansion. The colors are a bit garish but that’s hardly a deal breaker.

Of course, there is a surviving Garth child in the mansion and he slowly begins knocking off the characters one by one but I found myself a bit confused as to whether there was one or two Garth kids running around until the end of the movie. Sometimes it seems like there are two of them killing everyone since he seems to be in two places at one time. But then again, the killer is always faster than the victim in slasher films no matter how fast they run so I write that off. There is one great scene in which Marti & Jeff are talking in a bedroom as a carpet slowly begins to rise behind them that is terrifically scream worthy although I couldn’t figure out why they didn’t notice it sooner. Another nod to a standard trope of slasher films I suppose, victims NEVER notice the killer until it’s too late, even when they’re right in front of them. 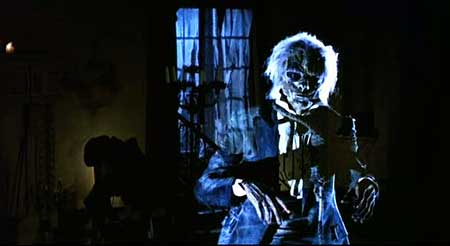 Director Tom DeSimone honed his craft during the 70’s as a director/star(Lancer Brooks) of gay p*rn films. He also directed some WIP films (“Prison Girls” & the awesome “Reform School Girls”), Exploitation films (“Angel III: The Final Chapter”) & a slew of TV work. He has a steady hand here and manages to keep the overacting to a minimum & the suspense to a maximum. “Hell Night” manages to rustle up some decent scares despite the familiarity of the script. It’s not the best of the slasher flicks of the 80’s but believe me it’s hardly the worst. It rates a solid three out of five shrouds from me which is saying something since I am so averse to watching Ms. Blair in any film.

After all, she practically ruined my life…..