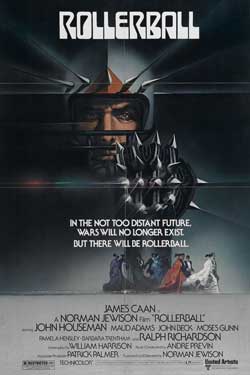 The year is 2018. There is no crime and there are no more wars. Corporations are now the leaders of the world, as well as the controllers of the people. A violent futuristic game known as Rollerball is now the recreational sport of the world, with teams representing various areas competing for the title of champion. The defending championship team, the Houston team led by the determined ten-year veteran Johnathan E., are looking to repeat as champions. However, Bartholomew, the sinister corporate head, wants Johnathan to retire, even though he is the most respected athlete of his time. Johnathan’s rebellious quest will not come out with complications, both for him and his teammates, after he decides to continue playing despite Bartholomew’s threats

From the opener sounds of the tune to Bach’s – Toccata and Fugue in D Minor we are taken into a world of things to come.

One of the great classics from the 1970’s Rollerball of 1975 stands as James Caan’s shining achievement as a versatile actor. Directed by Norman Jewison, and written by William Harrison “Rollerball” is unique in that it’s a science fiction film with horror tonality that is more applicable that the usual science fiction genre creations.

In fact, even the fact that I’m reviewing this now in 2009…. some of it’s predictions have surfaced in remarkable ways. While not a space film, it is presented as a glimpse of things to come. It glorifies violence being sensationalized on TV and media. the film also probably served as an influence on the film Logan’s Run which would debut a year later. Like Logan’s Run, the focus surrounds a coliseum type pit setting where viewers can come to witness the events unfold…..a spectator sport. “Roller Ball” also mirrors a previous film which ran in 1972 called “Kansas City Bombers” starring the then popular Raquel Welch. In many ways it bears similarities as far as the sport is concerned but has its own flavor using its science fiction elements. 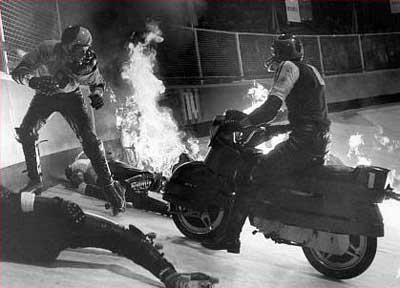 A ball is fired into the ring. The 2 teams skate around and ride on motorcycles with the goal of capturing the ball, and placing it into the basket. They win by accumulating goal points. Meanwhile the emphasis is placed on violence in the ring to provide a visual highlight to viewers. Punch, kick, slam, knock, hit, trip …anything to disable their opponents with sometimes fatal consequences. As the popularity of the game increases so does the attraction to its violent presentation. The game evolves on the basis of future competitions which feature teams competing without rules, penalties or regulations. 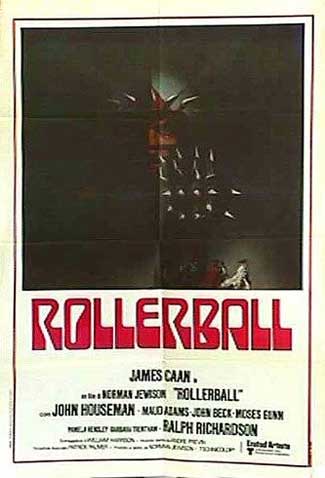 In short, it quickly turns into a blood bath. One man stands above the rest. Jonathan E, is a superstar in the field of Rollerball. His stardom threatens the wall of suppression the corporations have fought hard to build and therefore he is asked to retire. Not taking this lightly he rebels against the system while at the same time uncovering its mask of suppression against man and it dominance over freedom. Moon Pie is Jonathan’s protege who is quickly ascending up the ranks as a next in line superstar. It is a different time where control is king even to the point of assigning relationships. Jonathan E’s suspicion prompts him to ask the questions no one else is. 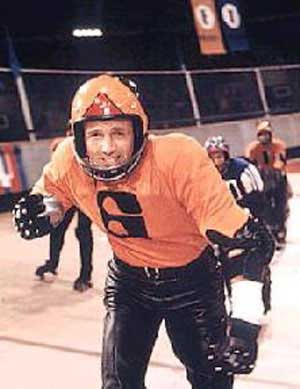 If I were to sum up the filmin one word it would be “supression”. You’ll also notice that the film was set into a future 2018 date. The premise lays an environemt in which there is no crime, poverty or wars to deal with.. The world has changed due to the “corporate wars” which won out and in return for control of everything. It is not entirely suggested as Big Brother but it does control the basic elements of life…..food, water and shelter. Books are also edited and disposed of leaving the teachings to assigned professionals rather than individual freedom of choice. The corporation that drives the Rollerball game is called “Energy”. They are fueled by corporate decision makings. 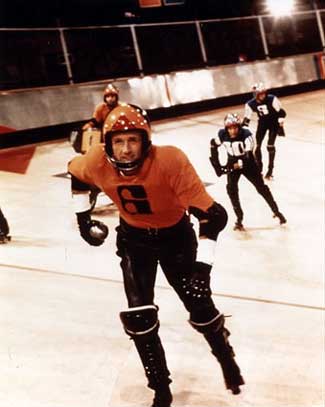 In one display a woman fires a bazooka like gun at full grown trees for amusement. A mark of symbolism that signifies that years of growth can be destroyed in seconds. Houses are equipped with glorious comforts, riches and modern conveniences. In fact the “then” illusion of large TV’s on walls has become a present day reality strangely enough. The film is a classic portraying of a man who chose not to accept the current status quo. We’ve seen this film relationship in other films such as “Braveheart”, “300” and “Gladiator”. In a most memorable scene Caan realizes that his friend Moonpie has been violated by the opponents unfairly and to fatal consequences. The quiet moment and reaction is priceless as we begin to feel the tables turn. In other scenes, POV is brilliantly used to show the emotional state of the characters though their own eyes. 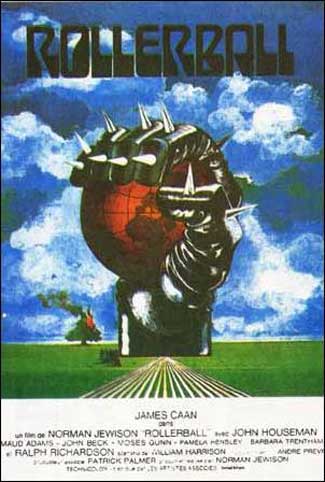 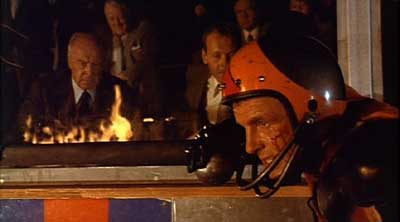 RollerBall evolves into horror as the rules of the game are changed with the price of lives and chaos coming to the forefront to simply entertain viewers and ratings. The film “Running Man” also used this approach as a focal point. RollerBall connects in away that you feel the loss as players are slaughtered for gain and stands today still as a remarkable piece of cinema. The remake by the same name in 2002 stands as a box office failure for its loose story, lack of connection and poor storytelling that places it among one the worst adaptations ever made. Stick with the original.