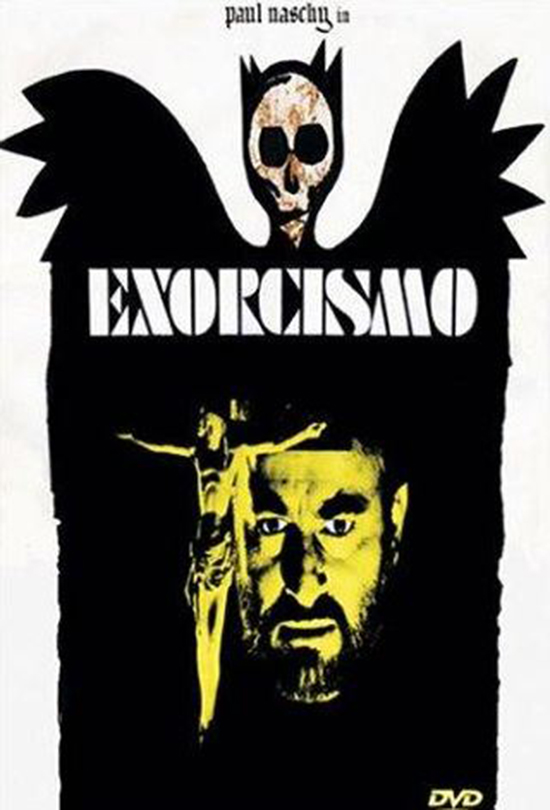 After a near fatal car accident a young woman exhibits signs of demonic possession. Her terrified mother calls in an exorcist in hopes of saving her daughter’s life and her soul.

Let me admit right up front that I’m a huge fan of filmmaker Jacinto Molina, better known by his screen name— Paul Naschy. For those unfamiliar with Naschy, he was a popular Spanish actor, writer and director from the 1960s-1980s who fell in love with the classic Universal horror films. In his biography, he recalled that one of his fondest childhood memories was seeing Frankenstein Meets the Wolfman (1943), an experience that completely changed his life.

But I’ve always suspected that another, distinctly European pop culture item also influenced his work— the burgeoning Italian Fumetti comic books of the mid-1960s. Somehow these gruesome, sexy, adults-only horror comics slipped past Spain’s eagle-eyed censors and into Naschy’s eager hands. Every Fumetti title was packed with vampires, zombies and flesh-eating ghouls in hot pursuit of voluptuous naked women. Seeing them must have been an epiphany for Naschy, who incorporated these taboo elements into all his films. That’s my theory anyway. 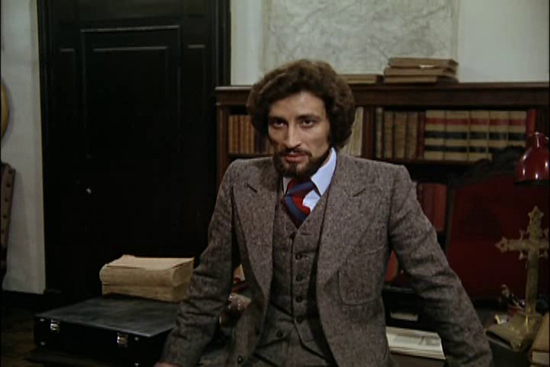 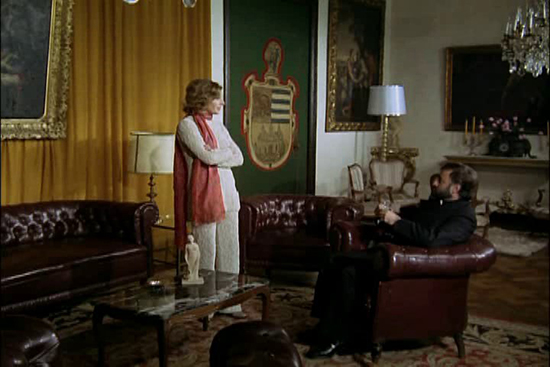 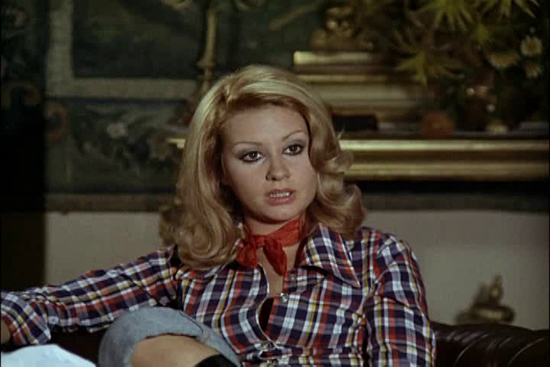 Naschy cleverly combined the classic monsters of the Universal era with the gruesome sexuality of the Fumetti comics. Starting with 1968s Le Marca Del Hombre Lobo (Mark of the Werewolf aka Frankenstein’s Bloody Terror) he created dozens of deliriously trashy, but very atmospheric horror films. Over the next fifteen years he played a werewolf (his signature character), the mummy, Dracula, Frankenstein, the Hunchback, and even Mr. Hyde.

His films may have been jammed with gratuitous gore and nudity, but what really made them standout was Naschy’s obsessive love and devotion to the gothic horror genre. Despite having miniscule budgets, he offered audiences a timeless world of fog-shrouded castles and moldering crypts. Amazingly, he accomplished all this outré stuff during Spain’s puritanical and restrictive Franco Regime— I’m referring to General Francisco Franco, the notorious Fascist, not Jess Franco, the notorious filmmaker. Naschy had an amazing run, starring, writing and sometimes directing over fifty films but by the early 1990s his feverish pace was stalled by an oversaturated market and changing economics- but it sure was a wild ride! 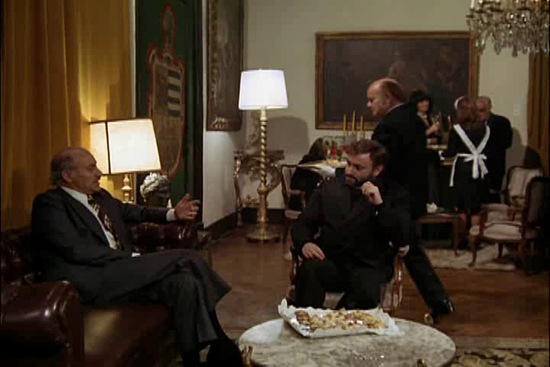 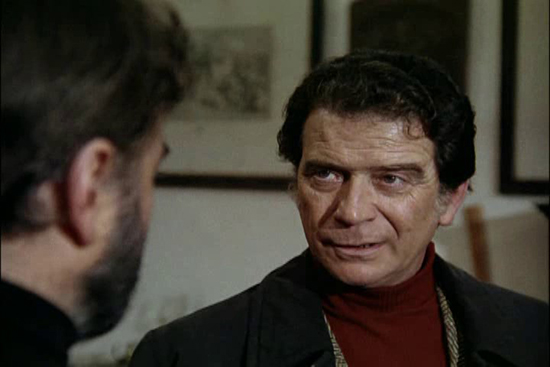 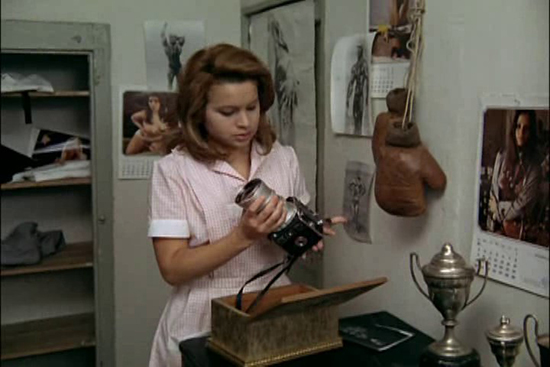 During his busiest period Naschy wrote and starred in 1974s EXORCISMO, an unrepentant Spanish knockoff of The Exorcist. Sadly, it isn’t one of his career highlights, but even a mediocre Naschy film has glorious moments.

The film starts off smartly with a satanic ritual conducted on a moonlit beach. Attending this seaside black mass is Leila (Mercedes Molina) who mistakes the occult ceremony for just another hippie love fest. She has a car accident while driving home from the ceremony and barely survives. Medically, she makes a full recovery— at least until she starts going full-on Linda Blair complete with vomiting and blasphemy.

Her concerned mother (Maria Perschy) calls in Father Dunning (Paul Naschy) a priest with a strong background in exorcism. Father Dunning discovers that it isn’t a demon possessing the young girl, but rather the ghost of her dead father. This subtle departure from The Exorcist formula adds a whole creepy incest vibe that’s especially disturbing when the possessed girl gets into a bit of self-love. Adding to the weirdness is a wave of murders where the victim’s heads are twisted 180 degrees. Surprisingly Father Dunning becomes the police department’s primary suspect. 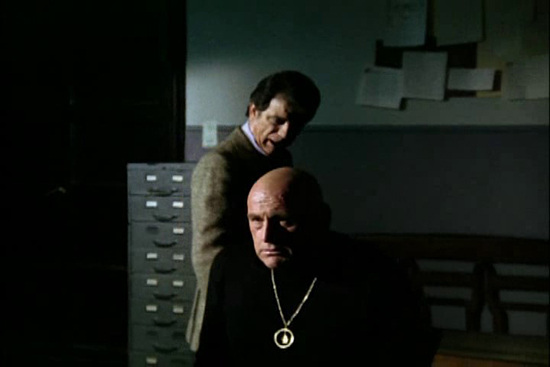 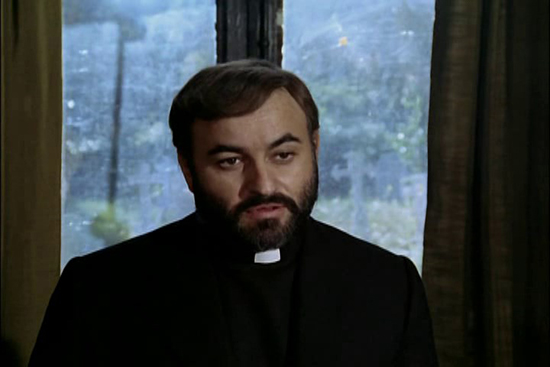 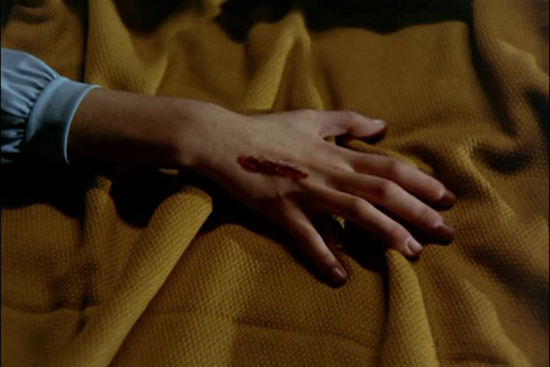 I just shuffled and compressed events from the beginning and last third of Exorcismo because the middle of the film is a dramatic ghost town. Naschy’s script has no real second act, so after a strong start the movie spins its wheels for a good forty-five minutes until its Exorcist influenced finale. Naschy was never a brilliant screenwriter, but he was usually savvy enough to dole out helpings of scares, gore and flesh every few minutes. This time he forgot his own recipe.

Speaking of forgetting the recipe, Exorcismo’s contemporary urban setting is both a major departure and problem. Naschy generally set his films in the distant past, or in remote modern locales where time has stood still. I swear, if you watch all twelve of his modern-day werewolf films you’ll never see a character that owns a functioning telephone. These backwoods settings allowed him to utilize real castles, ancient monasteries and crumbling catacombs to tremendous effect.

That’s why his modern-day gothics like Werewolf Vs. The Vampire Woman and Horror Rises From the Tomb look visually splendid on limited budgets. In contrast, Exorcismo’s contemporary mansions and offices just look mundane, despite solid camerawork by Spanish ace Francisco Sanchez (Curse of the Devil 1973, Night of the Seagulls 1975). Naschy and Sanchez’s earlier collaboration Vengeance of the Zombies (1973) fell into the same visual trap on an even lower budget.

The other problem is Juan Bosch’s uninspired direction. Bosch was a hardworking Spanish director with over thirty films to his credit, but his direction always fell into the “workman like” category. He seems like a guy who always finished his films on schedule and never made a fuss, so producers liked him. In Exorcismo he does a nice job on the Black Mass scenes, but shows little interest in spicing up the rest of the film. 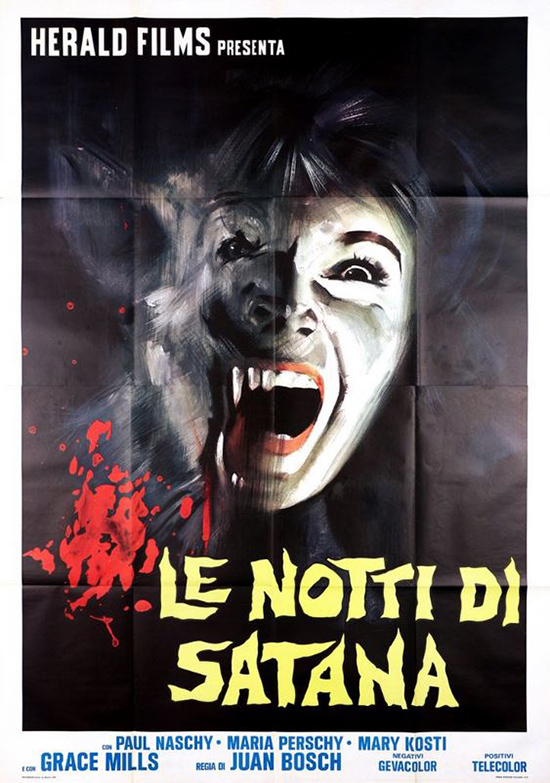 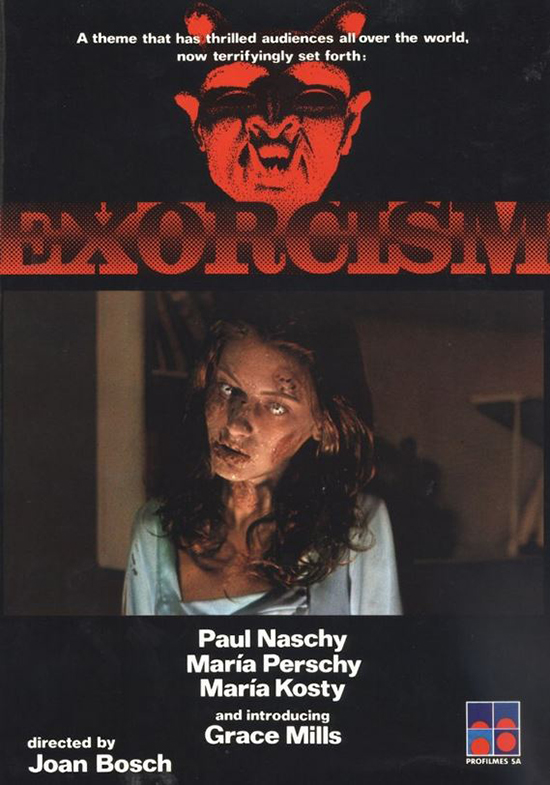 But these are all just bumps in the road leading to the fun climax that’s worth the wait. I give Exorcismo high marks for having the most disturbing demonic possession makeup outside the actual Exorcist. It’s really disgusting… I loved it.

Naschy gives a bravo performance and looks great as the dedicated warrior priest. Not too many guys that can pull off a beard and fedora combination, but Naschy rocks it.

Mercedes Molina (no relation to Naschy aka Molina) is outstanding as the possessed Leila. She was a gorgeous actress who really dove into the role with both feet. Her possessed makeup was supposedly very grueling and included a pair of oversized contact lenses that look disturbing and painful onscreen. Sadly, she only made one more film after Exorcismo before vanishing from the screen. Kudos should also go to Ms. Molina’s stuntwoman who performs a stair-fall gag while wrestling with Naschy that hurts to watch.

Overall Exorcismo has severe pacing problems that require a lot of patience before you reach its standout moments. Do I recommend it? I think Exorcismo is worth seeing, but I suggest exploring some of Naschy great films first and working your way down. Start with Dracula’s Great Love, Horror Rises From the Tomb, Frankenstein’s Bloody Terror or Werewolf Vs. the Vampire Woman and if these gems trip your trigger, you can move on to his lesser, but still very entertaining works. 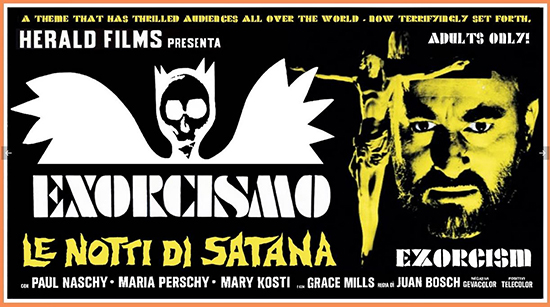 Despite its flaws Exorcismo was hugely popular in Naschy’s native Spain, becoming second highest grossing film of his career. It earned five times more than the Spanish cult classic The Living Dead At the Manchester Morgue, which was also released in 1975.

Exorcismo isn’t easy to find in any decent form, but fortunately I’d picked up the now out of print Eclipse release. That release had an excellent transfer and even offered a double bill with another wonderfully wacked out Spanish film- 1974s Night of the Sorcerers. It’s worth scouting the bins and resellers to find it.

Sadly, Paul Naschy passed away in 2009. He was a truly unique filmmaker whose vision and passion for the genre will be missed. I don’t know where he’s buried, but I hope there’s always fog swirling around his grave and that the shadow of a nearby castle falls across his headstone in the moonlight.