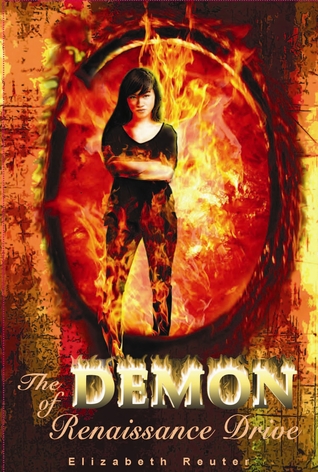 Annabelle a succubus nestled comfortably in the confines of eternal damnation is bored and restless. Her primary role is to deliver a multitude of incubus unto the Lord of Darkness. Gestation ordinarily lasts twenty four hours. Feeling a constant void she longs to experience the emotions of a mortal and devises a plan to stow away on a voyage to earth through a possible porthole.

Often witty, whimsical and borderline satirical Reuter’s casual depiction of the damned is highly entertaining. Conspicuous by his absence is one Lucifer as Annabelle bargains with King Belial to vie for a chance to journey to earth.

I especially enjoy the powers illustrated by the demoness with the ability to teleport and morph into the exact image before any heterosexual male to the minute detail of their lustful desires. Should a man long for a buxomy, tall, voluptuous red head this is exactly how she would appear.

At the last moment for embarking upon her mortal odyssey she lures a tortured soul she nick names Harry along for the ride. In clear violation of hellfire and brimstone’s ethics and morals (which is humorous in its own right) she defies the law of the land.

Entering human civilization turns out to be more than what Annabelle had bargained for. Sure enough she’s in ecstatic bliss initially, truly riveted to the mundane synchronicities we ordinarily loathe as a society such as paying rent, making a meager living via vocational disposition, etc. Annabelle embraces the change of pace with great passion and enthusiasm. Her companion Harry on the other hand clearly is traumatized. His skittish, timid behaviour drastically interferes with his coping skills as he’s often incapacitated out of sheer terror.

Adapting a certain humanistic affection for Harry, it virtually breaks Annabelle’s heart for her to witness him reduced to a blubbering, invalid mess. After considerable deliberation she initiates her first serious moral decision and vows to get Harry professional help.

Reuter’s tactic of appealing to the blue collar, everyday worker prevails in subtext form as financial restraints place fewer options on Annabelle to get quality assistance. In true hellacious form she breaks into Dr. Jimmy Hamid, psychiatrist’s home and threatens to kill the therapist unless he treats her companion. In touching if not comical illustration of added stipulation, she offers to pay the good doctor whatever she can offer.

Valuing his life, Jimmy takes the case on with few other alternatives. After extensive therapy, a hypnosis session is utilized one day. Dr. Hamid unveils the truth behind Harry’s damnation. He was a white supremist fixated on hate crimes against the African Americans in particular. As the good doctor and patient grapple with moralistic remorse, Annabelle learns her earthly guise has been blown. Hell hasn’t been the same since her departure. Our protagonists race against time and the very essence of evil towards a final apocalyptic showdown you won’t believe.

Elizabeth Reuter has a firm grasp on the complex concept of eternal damnation and conveys it effectively through commercial fiction in a light hearted and even at times endearing fashion.

Annabelle’s passion for wanting to explore human emotion is touching, catering to our empathetic side.

Some minor grievances or personal pet peeves with Demon on Renaissance Drive is the relationship between Dr. Hamid and his parents. Their interaction is highly irritating and irrational. Upon peeling back the psychological layers a resounding consensus can be achieved that this type of interaction is more common than expected. The scenario sets up some well-timed comedic relief once again. Imagine an esteemed psychiatrist getting lectured and nagged about eating his vegetables! Classic.

Reuter may be best advised to proceed with caution when mentioning Harry or formerly the mortal Steve. The switching reference can cause confusion to the reader as the subconsciously try to decipher who Steve is again and how he relates to the story. At times it may interfere with an otherwise gloriously flowing story.

Over all an effective romantic/comedic/horror tale, there is a little something for everyone here. The genre eclipses one another with ease;. a sound recommendation for those with a taste for the lighter side of hell.