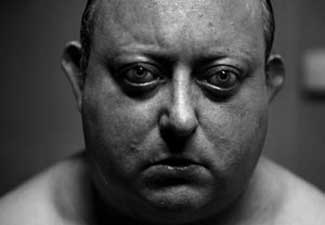 For the very few of you who haven’t seen “The Human Centipede 2 (Full Sequence) let me remind you of what you are missing: You’re missing a BRILLIANT sequel to 2010’s “The Human Centipede (First Sequence)! A sequel that pulled the rug right out from everyone who saw it. A film that took the expectations of what a typical sequel might be & turned them on their ear. A wholly unexpected masterwork from Dutch filmmaker Tom Six that not only delivered the goods but introduced to us the incredibly disturbing character Martin Lomax. A mentally disturbed individual living a hellish existence in a small flat with his mother (Who hates him intensely). But Martin has a dream…and as brilliantly essayed by Laurence R. Harvey, Martin Lomax is on a mission to make his dream come to fruition. Mr. Harvey was generous enough to spend a bit of time with me to discuss his career & his star making turn in the role of Mr. Lomax.

HN: Let’s start out with a bit of background shall we? How long have you been acting?

LH: I started out doing performance art at college which was quite a while ago. I’ve been performing for about 25 years but I only started doing TV work since 1994. I’ve done a lot of theater & U.K. Television work also but this was my first feature film.

HN: Which answers my next question actually! How did you find out about the role of Martin Lomax? Were you contacted by the producers? Was there an open casting call?

LH: My agent got me the audition through Spotlight which is the actors directory in the U.K.

HN: OK, so once you got the role & you sat down with the script for the first time, what did you think of it?

LH: Originally there was no script! There was a bit of a description of the character to lead into the casting. During casting, Tom just went through the whole film scene by scene verbally. Often taking digressions to describe what kind of feelings he wanted during certain scenes. It was like we were making “Thundercrack” or something! 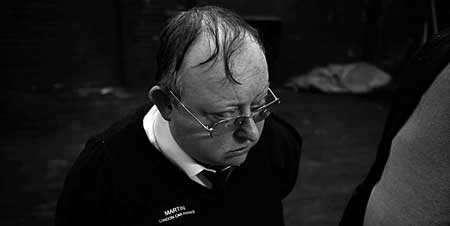 HN: Had you seen “The Human Centipede (First Sequence) before you got the part?

LH: It hadn’t opened yet. It was still a small film doing the festival circuit when I got cast in the sequel actually. We had a screening the morning of the casting. I literally saw the film & went into casting 30 minutes afterwards! (Laughing)

HN: Wow…talk about a baptism by fire! What were your impressions of the first film?

LH: Well I liked the way it mixed references from high brow films & low brow schlocky films as well. All of the Fellini references & such…mixing all of that with all of the traditional horror tropes: The house in the woods, the broken down car…I was intrigued by that. I was also intrigued by the fact that a lot of people weren’t sure if they were watching a good film or a bad film and then all of a sudden it’s too late because the film has caught them off balance & worked it’s magic on them as it were! I thought Dieter(Laser) was amazing also! I thought afterwards that I had some big shoes to fill… 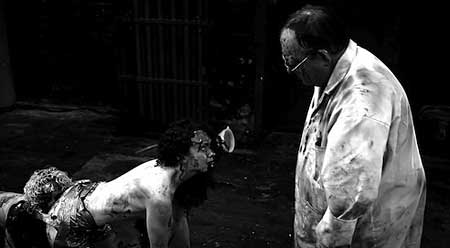 HN: I agree with your assessment of Dieter’s performance. I thought it was one of the best performances of the year. In any film. It’s my opinion that the first film works a lot better as a pitch black comedy than as a out and out horror film whereas your film works more as a hardcore, balls to the wall horror film. I thought the central conceit, the “Metanarrative” if you will, behind it was brilliant. You play a fan of the first film, such a fan that he wants to recreate the whole idea of creating a “Human Centipede” in the real world. And on a MUCH bigger scale! Any thoughts on my assessment?

LH: I kinda know what you mean. I think all of Tom’s films kind of come from black comedy. He has this boyish enthusiasm & his approach to horror films are something akin to a sick joke. I think our film is a black comedy & the first film plays around more with the absurdities & the tropes of a horror film. The second film is kind of playing as a “Quasi-Realist” film that takes the grotesqueness up to the absurd level. It’s kind of an absurd satire, a broad comedy in a sense. That would be my take on it, it’s a “Gross Out” satire. 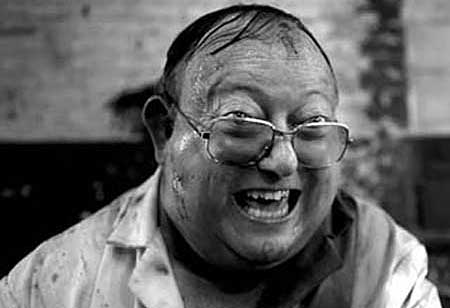 HN: That’s fair. How did you feel about all of the required nudity in the film? Did you have any problem with that?

LH: Ummmm….NO(Laughing)! I think if I had known how much I’d be on screen I might have worked out a bit more beforehand though! I knew what I was getting myself into anyway but I was wearing underwear for most of the film.

HN: So you didn’t have a problem with the blood or the violence either right?

LH: No, I like gory films so that was fine with me.

HN: I have another theory to ask about regarding Martin. He doesn’t speak at all during the film. He utters some gutteral grunts & screams quite a bit.

LH: He doesn’t speak on camera…

HN: Exactly! But there are constant references being made to what Martin has said to others during the film. In your mind did you think Martin couldn’t actually speak & everyone around him was saying what he thought they might say in his imagination or could he actually speak?

LH: I think he can & chooses not to because he doesn’t want to draw attention to himself & he sees the people he’s captured as actual segments of a centipede, not as people. He just wants to get down to work & realize this sculpture from his imagination & make it real. You wouldn’t talk to them either. That’s the way I approached it. It also helps that the victims don’t seem to get an actual handle on Martin, so he seems more threatening if he doesn’t reply to them. So there is a certain denial of communication coming from him. In the first film the head of the centipede only spoke Japanese so he couldn’t communicate with the doctor & the other two segments, who spoke English, couldn’t because of the way they were all connected. So there was a bit of non communication in the first one & I think Martin kind of carries that through in the second one. 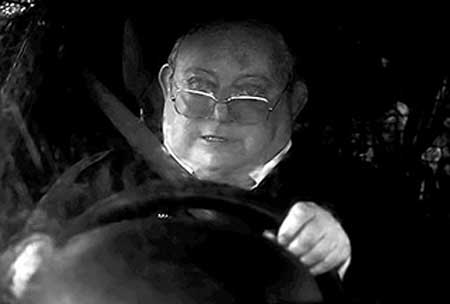 HN: Most of the later scenes in the film that take place in the area that Martin has rented to build his sculpture are really cringe inducing. Especially when Martin begins to put his pieces together. At one point he’s giddy with excitement over what he’s about to attempt. Were these scenes in the script or did they evolve as filming continued?

LH: I discussed Martin’s character a lot with Tom before shooting commenced. Initially Tom wanted Martin to be portrayed as the typical “Mentally Challenged” character you would find in a horror film whereas I kind of wanted to shy away from the mentally challenged background for him. The way he responds to things is more of a example of his background & how he’s been treated by others. That affects his social & educational development which is very limiting rather than anything else. The lack of social development also hinders his rationale. He can’t empathize with anyone else very well. In a sense he’s all by himself.

HN: There’s a great deal of pathos going on with Martin as well. There is a bruising scene where Martin’s mother sneaks into his room at night while he’s supposedly sleeping & begins to stab at him with a long knife as he’s asleep. All of a sudden the lights come up & she realizes she was stabbing a pillow as Martin was standing behind her in the dark, watching what was happening. He doesn’t respond…he just slowly walks past her & gets into bed, slowly closing his eyes as if he’s expecting her to make another attempt on his life. ACCEPTING the fact that she might try again, yet he’s at peace with it. It’s a really sad scene actually & my heart went out to Martin as he lay down seemingly expecting to be murdered…

LH: The filming of that scene went really well actually. I think that sort of thing happens quite a lot to Martin, hence he was used to it. His non reaction was just a sign that he was accustomed to his mother causing such trouble for him & was a bit bored by it all. The audience is shocked by it because it’s the first time they’ve seen it. But Martin is used to it all by now.

HN: The idea of Martin being an object of sexual desire for his therapist was also pretty depressing to me. He had no one to turn to in the film at all.

LH: Well, Martin was abused by his father as a child. And his father has passed away. My take on it was that Martin was looking for a father figure throughout the film. And since the only father he’s known abused him it seems only natural that he would gravitate to his therapist who wants to rape him or to Dr. Heiter from the first film, which Martin watches religiously throughout the film.

HN: Throughout the film I expected it to end as a complete tragedy with martin dying a heinous death. At the end he does get his comeuppance in a most uncomfortable looking manner yet we find him back at work as if nothing has happened to him at all afterwards. Was this a flashback of sorts?

LH: It’s an ambiguous ending, which I quite like actually. Some people think he got away with it & the child you hear crying at the end is Martin’s “Inner Child” crying to be let out, some feel it’s all been a dream of sorts. Some think that the child crying at the end was the child born earlier from the pregnant woman who escaped Martin & that his whole scheme was going to be unraveled. So you can take your choice from those endings or even come up with one of your own. I quite like that it doesn’t quite give you the pat “Evil has been conquered” type of ending myself. Especially since Martin isn’t truly evil. Delusional & lonely yes, evil?….no.

HN: Has there been talk of a third entry in the series?

LH: I haven’t actually seen Tom in a while. We’ve been out & about promoting the film. I did get an email saying that there was a third one in the works though. It will have a very “American” feel to it from what I’ve been led to believe so far.

“The Human Centipede 2 (Full Sequence)” will be available on DVD/Blu-Ray on Tuesday, February 14th