13. Dr. Giggles (Dr. Giggles, 1992)
When the kids of the neighborhood sing: “This town has a doctor and his name is Rendell / Stay away from his house cause he’s the doctor from Hell / He killed all his patients, every last one, / And cut out their hearts…purely for fun. / So if you’re from Moorehigh and you get sick / Fall on your knees and pray you die quick,” you know your town doctor doesn’t take the Hippocratic oath too seriously. Such is the case with Dr. Giggles, real name Evan Rendell, Jr., so named because of his maniacal laugh. This doctor earns his spot because he spent his youth helping his father remove his patients’ hearts in an attempt to revive the deceased Mrs. Rendell. And then, after escaping from the local mental institution, continued the family practice. A horrific doctor to say the least. 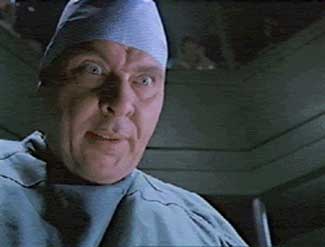 12. Dr. Jack Griffin (The Invisible Man, 1933)
A mysterious guy, with a bandaged face and sunglasses, takes a room at an inn in Sussex. He never leaves and demands that the staff leave him completely alone. This man surely has a dark secret, one that is slowly revealed to his suspicious landlady and the villagers: he is an invisible man. How did he manage that? Well, he discovered the secret of invisibility while conducting experiments with a strange new drug called monocane. The drug has rendered him invisible to the human eye, but it has also driven him insane. Such is the cost for the advancement of science. 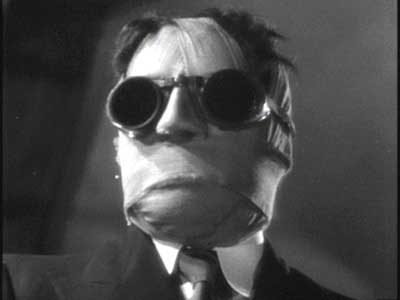 11. Herbert West (Re-Animator, 1985)
Not technically a doctor, but he can make people come back from the dead, a feat that would make any M.D. jealous. I hate this movie, but the medical achievements in this film are noteworthy. And disgusting. But it’s based on a Lovecraft story, so I guess it’s OK. However, I’ll ask: isn’t this, in essence, another zombie movie? People die and come back from the dead, nearly mindless and destructive, right? Yep, they do, which is… a zombie movie! Just on a smaller scale. 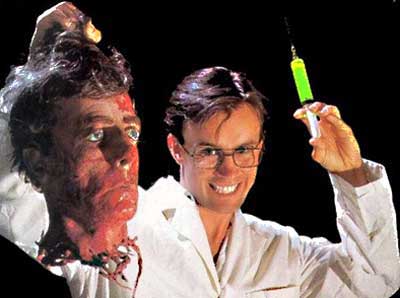 10. Dr. Hannibal Lecter (The Silence of the Lambs, 1991)
Not all doctors are of the medical or science kind; some are scholars. For example, here, fresh from the Baltimore State Mental Hospital, is Hannibal Lecter, PhD., narcissist, cannibal, and, you have to admit, genius. Edward Norton claimed he was insane in Red Dragon, but you have to admit that it takes some massive skills to perform a craniotomy, a la Hannibal. Really, dear ole’ Hannibal is just too smart for his own good; or, I should say, too smart for our good. For instance, when asked to give Police the name of a suspect, he gives them an acronym for the chemical make-up of fool’s gold. He’s a sociopath to the core, something you never want your doctor to be. Thank God he doesn’t actually (mal)practice medicine anymore. Unless, of course, you’re in Jamaica, or Argentina. 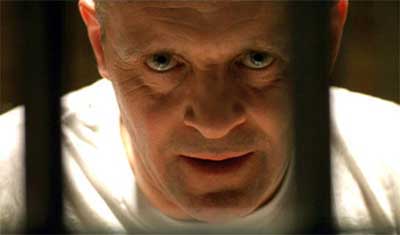 9. Dr. Anton Phibes (The Abominable Dr. Phibes, 1971)
Another non-M.D., Anton has a double-doctorate in Music and Theology. His list of accomplishments: After being disfigured in a car crash, he uses his skills to create a life-like mask to conceal his injuries and a system that allows him to speak through a hose connecting his windpipe to a gramophone. Then he uses the ten plagues of Egypt to systematically kill seven doctors and a nurse. Then he drains himself of blood and replaces it with embalming fluid. In case you missed it: he did it himself. Abominable, indeed. 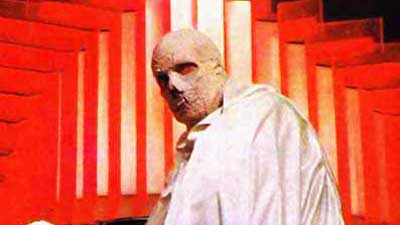 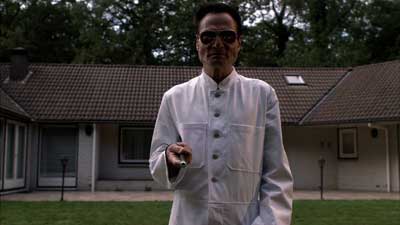 7. Dr. Henry Jekyll (Dr. Jekyll and Mr. Hyde, various)
Chemistry is dangerous. We all know it. Mix the wrong chemicals together and it can explode in your face, or turn weird colors, or turn you into a monster. Well, maybe not a monster, just an extension of yourself. An evil extension. Dr. Henry Jekyll’s potion is a medical miracle, although it caused him nothing but pain and suffering and, in the end, he needed it to remain himself. The good and evil in every man is a theme with a long history in horror, and it was never better exemplified than in Dr. Jekyll and Mr. Hyde. 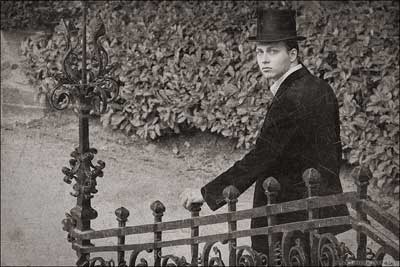 6. Dr. Seth Brundle (The Fly, 1986)
Of course I’m talking about David Cronenberg’s The Fly, because the 1958 version was not a masterpiece. Another non-M.D., this scientist (played by Jeff Goldblum in one of his greatest performances) creates machines that allow instant teleportation of an object from one pod to another. There’s one catch: although the telepods can transport inanimate objects perfectly, they don’t work on living things (think about the baboon that gets reintegrated inside-out). But then Brundel fixes the machine and, drunk, attempts to teleport himself. It works, but a fly sneaks into the machine with him and his DNA begins to merge with that of the fly. As with all Cronenberg films, the brilliance of this movie is that it comments on the failing medical profession and the lack of trust we now have for doctors—malpractice suits are more numerous than ever. 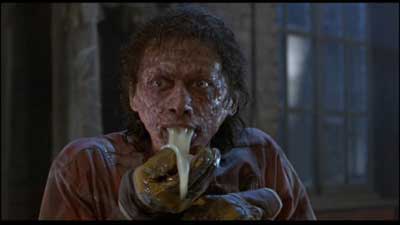 5. Dr. Caligari (The Cabinet of Dr. Caligari, 1920 and 2005)
It’s a tried and true horror plotline: deranged doctor uses a poor patient, in this case somnambulist Cesare, to murder local citizens. Oh, wait—it’s tried and true because this is the first horror movie! A German Expressionist film that was remade by reintegrating the actors onto the original backgrounds, The Cabinet of Dr. Caligari and the titular doctor earn their spot on this list because they started it all. 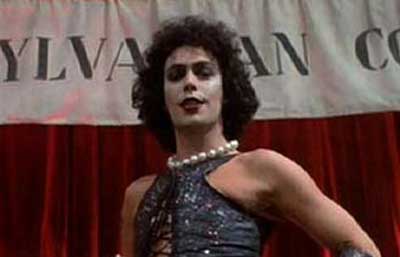 3. Dr. Loomis (Halloween, first appearance 1978)
The modern-day Van Helsing (see below), Dr. Loomis served as the face of sanity against The Shape in John Carpenter’s original Halloween. And, through the rest of the series, including a revived portrayal by Malcolm McDowell, he’s been the red to Michael Myers’ blood for 10 films. In the Rob Zombie remakes he’s a rock star-turned-author-child psychologist. But it’s Malcolm (Awesome) McDowell, so who cares? 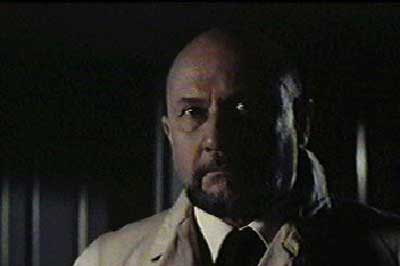 2. Dr. Abraham Van Helsing (Dracula, first appearance 1931)
The most accomplished of all horror movies doctors, Abraham boasts a long name: Dr. Abraham Van Helsing, M.D., PhD., D.Litt, etc. Like Dr. Loomis is the arch nemesis of Michael Meyers, Van Helsing battles Count Dracula. It takes every bit of knowledge to defeat (or, at least, thwart), the immortal Prince of Darkness. That is some serious expertise, and one high mission. 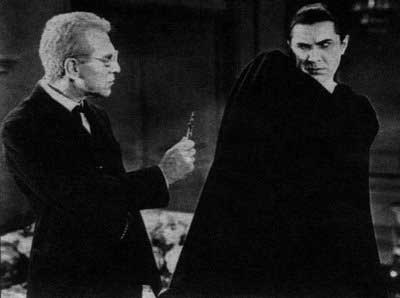 1. Dr. Frankenstein (Frankenstein, first appearance 1931)
In the book his first name is Victor, but in the movies Colin Clive plays young Henry Frankenstein, a man whose all-consuming desire is to create human life through electricity. It works, so much so that now he “know[s] what it’s like to be God.” Heavy stuff, indeed: no wonder it goes to his head. Of course, he immediately regrets what he’s done once he sees the violent tendencies of his newborn (even though in the novel and Bride of Frankenstein the Creature learns to talk like a regular person) and knows it must be destroyed. Part of being smart is knowing when to say when, and even though the good Doctor meant well, like some miracles of science, he took it too far. His achievements, however, are legendary. 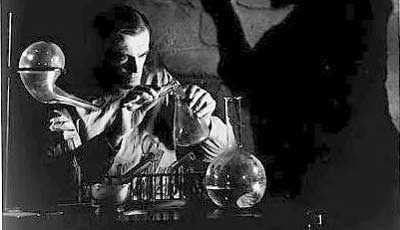 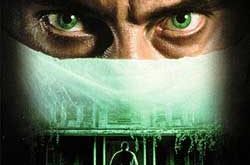