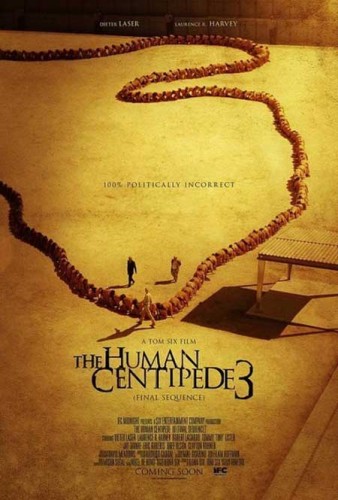 At a heatsoaked Texas prison, warden Bill Boss and his accountant Dwight Butler are in a predicament. Rising costs and uncontrollable violence has the governor breathing down their necks for immediate improvement. Boss tries castration as a way of taming the inmates, but his first subject proves this method to be ineffective. Butler presses upon him a much more unorthodox idea: stitching five hundred prisoners together, ass to mouth, to form a human prison centipede.

Introducing us to our first demented visionary, Dr. Heiter (Dieter Laser), The Human Centipede (First Sequence) (2009) started the ball rolling. After all the hype it came across fairly tame, but set the stage for the concept to be taken much further. The Human Centipede 2 (Full Sequence) (2011) started off with the creepy Martin (Lawrence R. Harvey) watching the first film, before embarking on his own plan to reenact and expand the hideous titular experiment. This self-referential touch brought an intriguing “meta” element to a film that wallowed in filth and revolted even much of its target audience – despite its striking visual style and strengths as a pitch-black comedy. 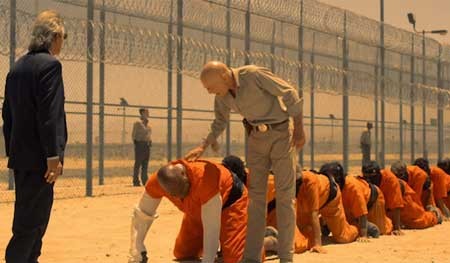 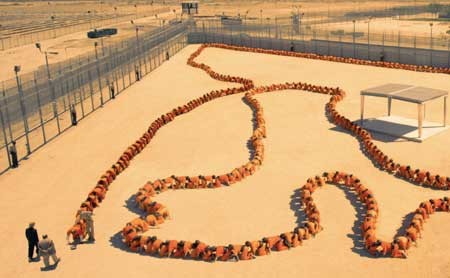 After a lengthy wait and an overwhelming mass of global disapproval, Dutch writer/director Tom Six has finally delivered his third and final sequence. Promising his fans that this film would make the second look like a Disney movie – itself cut or banned the world over – he built up expectations to a level he couldn’t possibly meet. And now that it’s time to collect, the verdict is in. To paraphrase one of his own characters: he talks so much shit, his ass must get jealous.

Final Sequence kicks off with the standard warning about sex and violence, then starts much like the previous film, with characters watching the end of Full Sequence. This intertextual slant takes on much bigger proportions when we realize that the two main characters are played by the villains from the first two installments in the series. This sets the stage for a lot of in-jokes and cheeky humor, with these actors holding up DVD copies of the films and talking about how bad they are; even Roger Ebert’s high-profile condemnation of the first film is later quoted – by one of its actors. 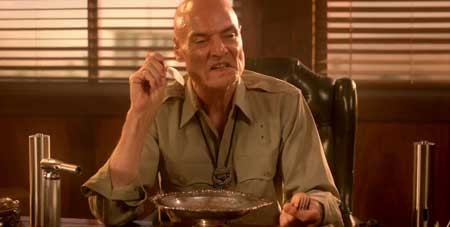 Then Dieter Laser opens his mouth and the film begins its rapid descent. The major excess of the film this time is his truly wretched performance. Both the German-born Laser and British-born Harvey sport ridiculous Texas accents, and all signs point toward the fact that the film is unashamedly over-the-top, but its aim is off – it goes so far over the top that at times it ends up closer to rock bottom. Laser’s endless shouting and bafflingly drawn-out delivery of almost every line goes from quirky to grating to excruciating within minutes.

As The Human Centipede 3 is by far the most openly comedic of the trilogy, one of the ways in which Six tries to offend this time around is with warden Boss’ constant barrages of extremely off-color racial, sexual and religious slurs – everyone gets it in this film: men, women, African Americans, Mexicans, Indians, Jews, Muslims, Christians, Nazis, Texans and Crohn’s sufferers. The director appears halfway through, as himself, and is clearly at ease poking as much fun at his own movies as anything else. Where the first film offered the much-debated claim of 100% medical accuracy, the tagline this time (“100% politically incorrect”) emphasises the humor and satire.

The gore is kept to a relative minimum, however, which is another aspect that will divide fans. A graphic castration and some up-close-and-personal shots of the surgical procedure (lacking from the earlier films) raise the bar high – but the second film wins out in this department. The third film also has an appealing look (color this time), and is obviously a bigger production, which might induce you to take your guard down before being confronted with the film’s most outrageous moments; cinema’s first instance of kidney rape recalls Udo Kier’s immortal line in Flesh for Frankenstein (1973) about f*cking life in the gall bladder. 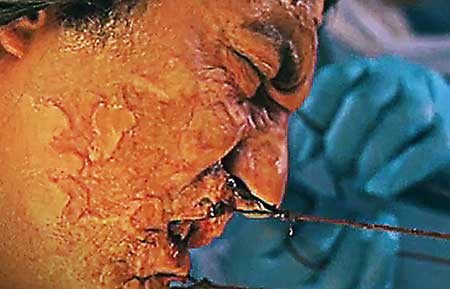 An interesting cast was assembled for Final Sequence including, in addition to the two leads, Eric Roberts and ex-P*rn star Bree Olson (who also appeared in a cute Human Centipede 3 short parody). And, to be fair, there are a lot of darkly funny moments and surprises peppered among the broad silliness and obnoxious tone that dominates. The warden’s belief that his gargantuan human centipede is a viable model of racial and religious integration, and the focus on the economic advantages of turning hundreds of incarcerated men into one long digestive tract – not to mention the jokey tone from beginning to end – make it hard to be offended. Of course, plenty of viewers will be.

The Human Centipede 3 is not without educational value, either. Apparently, great strength can be derived from chewing dried clitorises, although consumption of human excreta offers little nutritional value. As the director himself says during the movie, “Oh, man, this is so wrong.” If he nudged any harder, you’d fall out of your seat. 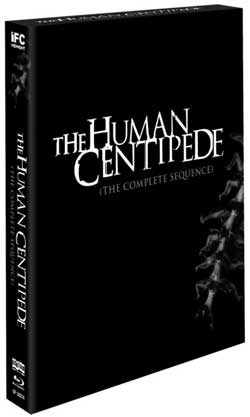