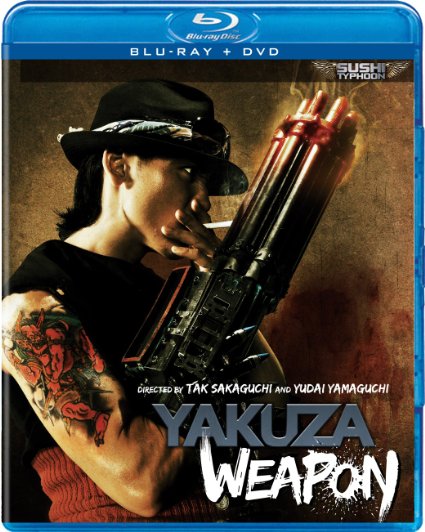 The Team that brought you VERSUS have returned with another hard-edged battle royale featuring tough gangsters, deadly women and cybemetic implants!!

“Typhoon Sushi” has got a new action packed blood soaked adventure for ya. This little gun-toting ditty packs in plenty of head blasting machine-gun fun. Right in line with the slew of release they have churned out over the last year arrives “Yakuza Weapon“.

Right away we encounter Shozo Iwaki (Tak Sakaguchi), who is in mid process of carrying out his mercenary style kills to a beat that defies odds. Dodging bullets, riding on the waves of explosions, Shozo is no normal individual. As he believes, it’s will power that gets him from one mess to the next. Shozo has been away from home for over 4 years now. He gets wind of his former gang master and father Kenzo (Akaji Maro) who heads the Yakuza organization. As Shozo has been away, a few things have changed in his absence. Namely the rise of Kurawaki (Shingo Tsurumi) who has assassinated Kenzo and is planning on taking over the entire operation by merging the East and the West under one rule….his. 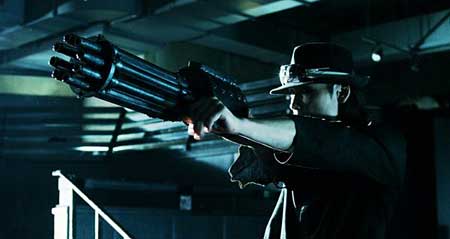 Shozo returns with a vengeance and purpose wrangling up the remaining bits of the Iwaki Family. His determination leads him to Kurawaki who has erected a high rise building protected by warrior guards on every level. Though the much more clever Shozo brings the building crashing down to him with one blow. This clever play brings the war that much close resulting in a fight to the death that leaves Shozo crippled without a right arm and left leg. 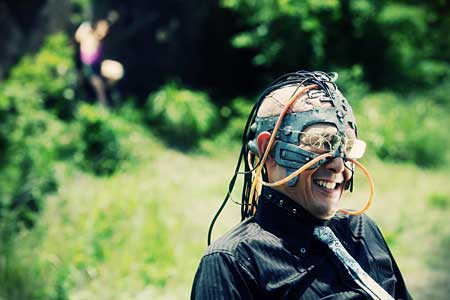 The ordeal is quickly remedied by a government agency who wishes to create a living weapon out of Shozo with the strength and money of Japan supporting him. Shozo now rebuilt with bionic parts awakens to his missing limbs replaced by a high power machine gun and knee rocket launcher. This new inclusion of weaponry is at first a bit painful but embraced by Shozu who realizes that he is a better version of his former self. Shingo Tsurumi as Kurawaki proves also fun to watch as he himself is rebuilt out of spare parts. His sleazy demeanor and villain stance makes for a nice antagonist to Shuzo’s character. Fans of this style will love the naked machine gun chick who fires rockets straight from her crotch to accompany her mouth mounted machine gun. 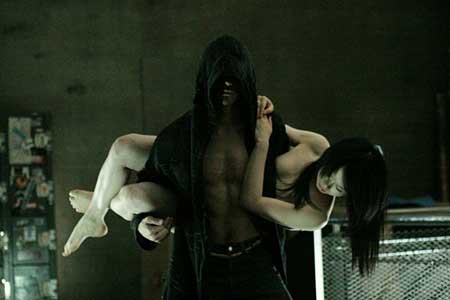 There is always a tone of dark humor in every frame even with all the violence and gore. I really don’t think you can get around that fact with weapons popping out of body parts left and right.

Shozo also finds himself dealing with his former best friend of whom he must make some tough choices. The character Tetsuo (Jun Murakami) adds some drama to the script with his own drug induced demise.

In short, your gonna get a firm helping of bloody battles and high tech weapon exchanges that arise out of the film like a manga meets gangster combo-trip. FX wizard Yoshihiro Nishimura is on hand to make sure that his unique style of effect inclusions are up to the usual standards of previous films. 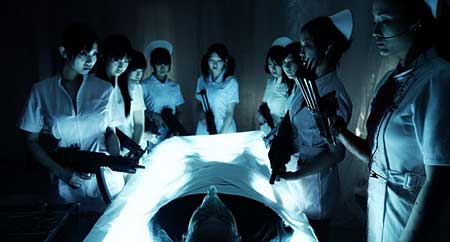 “Yakuza Weapon” is directed by the tag team of Yudai Yamaguchi and Tak Sakaguchi bringing a unique vision that falls right in line with the over top action films of the 21st century. It’s hard core Asian madness delivered with great intention to the audience that fuels more of their creations.

The ideas of rocket launching body parts and cybernetic enhancements are nothing new to the genre but are sure fun as hell to watch. This particular entry takes great interest in the sensationalism of the Yakuza origination itself by blending fiction, fantasy and the occasional martial arts stand off. Shozo who is played by Tak Sakaguchi delivers a high energy performance that never lets up for a second. I really enjoyed his enthusiasm and take-no-crap attitude that quickly paints him as this nasty violent driven superhero of sort. In closing, Yakuza Weapon packs a punch with extreme action and high energy ass kicking.