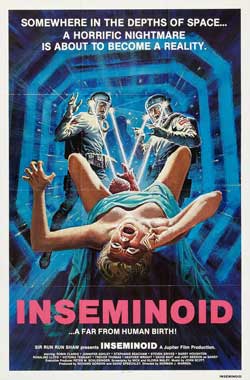 A crew of interplanetary archaeologists is threatened when an alien creature impregnates one of their members, causing her to turn homicidal and murder them one by one.

It all started in 1979. The tagline? “In space nobody can hear you scream”. The film? “Alien”, a bona fide classic that because of it’s immense popularity became the “inspiration” for a sh*tload of inferior copycat films. I can’t count the number of movies released in it’s wake that aped it’s production design, creature design, plot, etc…(Actually, I probably can. But that’s for another column). One of them was originally titled “Horror Planet” but came to America all the way from the U.K. with the imaginative title “Inseminoid”. 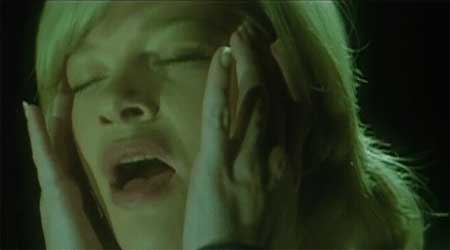 “Inseminoid” deals with a crew of archaeologists examining an underground network of caves on a remote planet. They find some odd crystal formations and some inscriptions on the walls of the caves that seem to point to an advanced civilization that has been long extinct. The planet’s atmosphere is harsh & bitterly cold despite the two suns that it revolves around. One of the crew members, Ricky(David Baxt), gets a little loopy when he’s exposed to he crystals through a cut on his arm & he is seemingly being controlled by some type of intelligence forced on him by the crystals. He tries to open up the the inner & outer airlock doors to make the air toxic to all the others but is stopped by a harpoon gun that just happens to be laying around.

Some time after his burial, two more crew members venture forth to gather more of the crystals for study when they are attacked by an alien creature. One of them is slaughtered by the creature but the other one, Sandy(Judy Geeson), is whisked away to some sort of chamber where she is inseminated by the alien. I should say “Artificially Inseminated” since a long tube is used to pump her full of some green lumpy goo. She awakens to find herself back on base with the others & it is discovered that she is already about two months pregnant although she has no memories of the attack. She also has a mark similar to the one Ricky has & also seems to be operating under someone (Or something’s) control as she goes on a rampage, killing everyone she comes across. From then on it’s Sandy vs. everyone else as she feasts on the blood of those that she kills & her belly keeps getting bigger and bigger…. 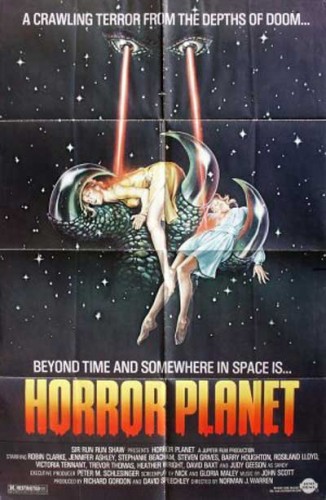 Let’s talk turkey shall we? “Inseminoid” is not a good movie. But it’s a fairly entertaining one. After a pretty slow opening it kicks into as high a gear as the production could afford (Which wasn’t much) & tries to keep it’s audience awake with some nudity & copious amounts of gore. It’s obvious that director Norman J. Warren studied Roger Corman very carefully since a lot of this film has some very Corman-esque qualities to it. For instance, the main control console that is used on the base is an old recording studio sound board, the walls of the station seem to be laden with oven dials, the harpoon gun (What the hell is a harpoon gun doing on another planet anyway)? doesn’t have a harpoon in it when it’s used later in the film, etc..There’s even what looks like graffiti on one of the walls of the cave that is just ignored as the actors run back & forth in front of it! That being said, the production makes good use of what it has to sell this movie as an adventure on another planet.

Some of the actors should be familiar to you, Stephanie Beacham (Dracula AD, 1972, And Now The Screaming Starts), Victoria Tennant (Flowers In The Attic) & especially Judy Geeson (Space:1999). Once Geeson’s character gets “Inseminated” she turns into a most convincing one woman killing machine. She’s actually very scary as she bugs her eyes out and screams in a most convincing manner. She looks like a freakin’ nutjob as she hunts everyone down smeared with blood with a insane look on her face. It’s a very intimidating & believable performance actually…she’s genuinely frightening. 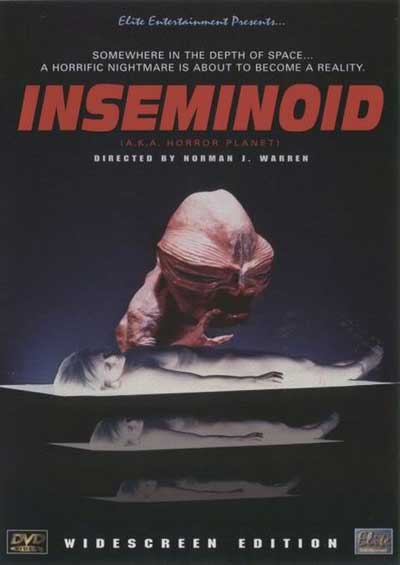 Of course she ends up giving birth (While wearing a pair of designer jeans I might add) in one of the caverns. It’s pretty funny when she’s laying on the ground screaming in pain fully dressed & then in the next scene her pants are off as two(!) slimy aliens creep out of her nether regions. She’s found asleep by one of the surviving crew members with the twin beasties sleeping besides her when she suddenly gets up with a maniacal look in her eyes, screaming like a banshee and chasing after the poor lug. At this point there are only three crew members left for her to wipe out but this time she has a couple of helpers… 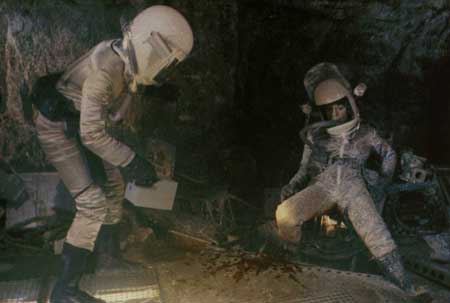 It all ends with the standard “You think it’s over but it’s just beginning” ending that you’ve seen a thousand times before but hell people, it’s still kinda fun in a stupid sorta way. Geeson’s performance is the film’s central one & she brings it home big time! Is she overacting? Maybe. Is she good at it though? Hell yeah she is! Some piss poor set design & editing might take away a bit of believability in her character but the sheer madness she displays while she’s running around screaming at the top of her lungs makes up for whatever shortcomings I noticed elsewhere. You should see this movie for her performance alone. 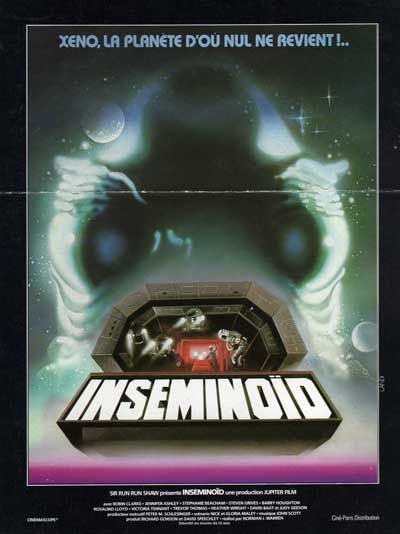 I actually saw this movie on it’s original theatrical release way back when & admittedly it played better on a big screen than it does at home. I noticed all it’s imperfections on the DVD I purchased a few years ago. Of course, I’m older & far more jaded now than I was then but that shouldn’t matter. It’s never gonna be remembered as a classic but it’s good for some sh*ts & giggles and Judy Geeson’s performance is balls out terrific! Give it a shot if you have a chance to. You could do far worse than “Inseminoid”.