If you are fans of Olaf Ittenbach’s work like were are, you already know that Olaf takes his gore and violence pretty seriously. Much of his work though still remains overseas, or hard to acquire for western audiences. We are thrilled to announce one of his wicked splatterpieces titled “The Burning Moon” that is due to arrive in special edition. Now…. if you havent seen thisone, your in for a shock when you get a load of Olaf’s version of hell.

Intervision Picture Corp is pleased to announce the Special Edition DVD release of Olaf Ittenbach’s shocking gorefest THE BURNING MOON. Described by Vice Magazine as “unspeakable carnage,” the last word in splatter-soaked, German nihilism was shot on glorious VHS in the 90s and will be packaged for the first time with a rare, recently unearthed 45-minute bonus making-of documentary.

“When the Germans make a horror movie,” says Mr. Beaks of Ain’t It Cool News, “THEY MAKE A F%*#ING HORROR MOVIE!” In 1992 writer/director/special effects master Olaf Ittenbach changed the face of video horror, force-fed its ripped-out eyeballs to screaming audiences, then used a drill, machete and shotgun on its still-twitching torso: Ittenbach himself stars as a degenerate junkie who babysits his young sister with two bedtime stories of the damned. First an escaped serial killer turns date night into a graphic family massacre. Then a country priest on a rape and murder spree leads to a disturbingly explicit descent into Hell. It became the VHS that shocked America. It has been banned in its Motherland for nearly 20 years. And it remains perhaps the most violent and depraved shot-on-video saga in history. This is THE BURNING MOON. 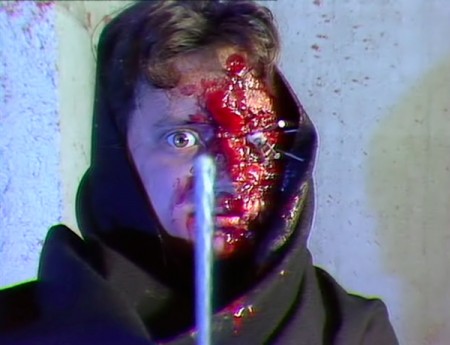